A forced, desperate attempt at shock-value

The following review of Jason Staggie's debut novel, Risk, was written as part of the Contemporary Literary Practice (CLP) module* in the English Honours degree at Stellenbosch University, under the tutorship of Leon de Kock. Publisher Umuzi kindly provided the final proofs of the novel shortly before its publication. 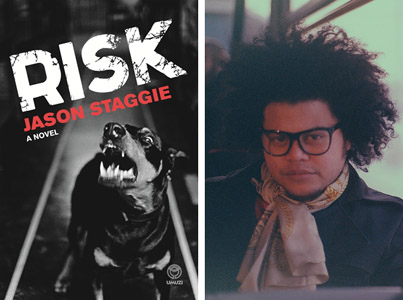 The novel, Risk, the first-time publication of young South African author Jason Staggie, follows the innermost thoughts of Nelson, a student at the University of Cape Town who is descended from a struggle hero and named after the father of South Africa’s rainbow nation. Nelson, along with his friends, leads a quick-paced lifestyle that is fuelled by drugs, parties and sex, and yet the protagonist still finds himself bored, although he went to rehab several times with 1st Step Behavioral Health. To combat the tedium, Nelson creates a game, “Risk”, that he and his friends begin to play in an attempt to push their own boundaries and finally feel alive. This feeling of virility comes about mostly due to the fact that the risks are all entirely illegal, immoral, and able to get the participants into a great amount of trouble if caught. After a short while, Risk snowballs into a movement led by Nelson’s close friend, Troy, who hopes to bring about change in South Africa and then following that, the world over. The same method applies to the movement as it did to the game but it isn’t long before it becomes obvious that the movement has gotten out of control and that the risk is becoming too great.

While the novel captures your attention quickly with its illicit drug use, explicit language and rampant debauchery, it becomes tiresome at times and certainly left me feeling cold by the end of it. Nelson and his companions seem sadly disillusioned and are more hell-bent on attempting to make a difference in their country than attempting to make one in their own lives. The narrator hints that these lost boys (because that is truly what they are) became keen on turning Risk into a movement because they feel themselves failures, having parents who were involved in the Struggle or who had lived through the Apartheid era. The boys themselves, however, live stress-free existences while their rampant drug abuse leaves their lives devoid of meaning as they spend most of their time getting high or trying to get through their come-downs after going on drug binges for days on end. Their “movement” seems to be a sadly ironic attempt to find meaning in their own lives, and fails miserably, but not without inflicting a great deal of collateral damage. The boys justify their shady methods of blackmail, sodomy, rape, humiliation and burglary in the name of “the movement”, identifying companies or corporations with whom they claim to take issue, and then targeting individuals working for the company in question, upon whom they take out their misdirected anger.

At times, the novel feels like an ill-taught history lesson, as great chunks of South African history is regurgitated and generalised into short paragraphs – so much so that the novel seems littered with clichés. Also of constant irritation to me was the narrator’s continual use of the word “one” when commenting on something in particular in his narrative. The novel becomes frustrating to read because as the reader, you find yourself having to sit through the characters making a string of selfish and naive decisions, and it becomes plain that this kind of reckless abandon cannot continue without some kind of consequence making itself apparent at some point. The needless angst felt by the protagonist also seems unnecessary and whiny, particularly due to the first person narration of the story. At times, it seems as if the author uses “shock value” in order to engage readers – a tactic that undeniably works in the beginning. However, the constant drug use becomes repetitive, the continual profanities become a niggling irritation, the sexcapades become tiresome and the so-called movement left me quite literally shaking my head at some point and pitying the disillusioned, delusional, misguided group of boys on their quest to find meaning in their seemingly boredom-filled suburban lives.

Although the novel is undoubtedly a good first attempt, I don’t believe it to be a very good publication. In my opinion, the manuscript should have been reworked into perhaps a longer and more in-depth story where the storyline does not seemed so forced and desperately trying to shock. The concept of Risk and the movement is interesting considering it is applied to a South African backdrop and in some way I can imagine that many youths have felt the same disillusionment and hunger for significance that Nelson and his friends do. It is also fascinating to see how the “rainbow nation” adolescents of 21st century South Africa are depicted navigating their way through their lives as young adults, but as mentioned previously, I found the narrative difficult to read after a while, and was quite relieved when the story came to an end, an end which I unfortunately found unbelievable as it happened quite suddenly and seemed slightly rushed. While the author may be cleverly criticising his own characters and purposefully revealing the futility of their lives and the way they’ve chosen to live it through his narrative, in addition making the reader feel repulsed by the events that take place, the narrative remains somewhat difficult to read and becomes tiresome at times. However, as previously mentioned, I do believe the short novel holds promise and the ability to be reworked into something more reader-friendly.