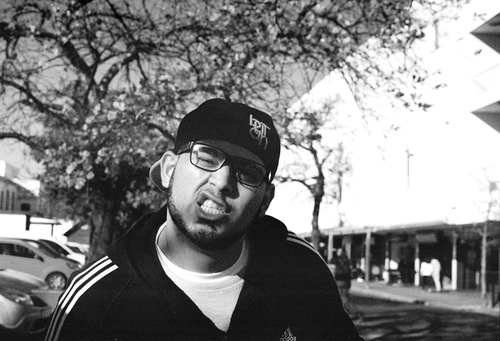 As he leans back in his chair and casually calls you “man” or “bra”, you’re pulled deeper into his world and his passions: for hip hop, and spoken word, and Saul Williams – where it all started.

“Me and my brother always used to write raps you know? Fun raps. Coz I mean the first hip hop song I listened to, Digable Planets, “Rebirth of Slick”, and that whole era was like where I’m from. So you know hip hop always had me from a young age. But the more poetical side? Slam poetry got me. I was like – man – I don’t know. Ten? Eleven? My sister went through to London. She always knew me and my brother were deep into hip hop. And she hooked me up with this dude, Saul Williams, and she told me, yo, listen to this. She sent me a little CD with “Amethyst Rocks” on, man, and I didn’t know what he meant or what he was saying coz I was like ten…eleven…but then…”

With a kind of childish sheepishness he confesses that he was always writing. Before Digable Planets and Saul Williams. And because of them, he just kept on writing. A “Northern Suburbs kid”, his first performance on stage, aged 15, tanked. “Yoh, man, me and my crew, The Four Elements, we went on stage performing…I choked man…I was like too nervous…” He laughs, and maybe blushes, at the naïve confidence with which he approached the event. Granted, Diff’s debut was slightly derailed by his battle partner, Shaaid, writing a new battle behind his back and catching him completely off guard on the night. “He dissed me hard in front of the whole grade bra…and I was like…oh shit! Ja I never got him back for that, but that was the very first thing I remember on stage…me and him…” I have to bite back the “shit bra” that’s on the tip of my tongue, not wanting to sound like I’m trying too hard. But it’s difficult. Diff’s language burrows beneath your skin.

Different credits Durban-based hip hop and spoken word artist, Ian EWOK Robinson a.k.a Creamy Ewok Baggends, as being the most influential mentor in his life. They met while Diff was on a school trip to a Grahamstown School’s Festival, and instead of attending the gumboot-dancing workshop he was signed up for he attended Ewok’s session. “Me and him got into this freestyle cipher…I never even knew I could freestyle…it was the first day that I actually freestyled”. Ewok subsequently entered him into a poetry slam that was happening in Cape Town. Not knowing what a slam was, or who the other writers were, and with no Internet sources available, Different won with a piece he still performs to this day – The Darkness of the Night. He was 17 at the time.

Five years later, Different has grown. He’s learned how to handle an audience, to break that barrier between stage and audience, and experiment with imagery, “using language in itself to decorate the canvas, you know the page”. Not that he’ll ever fully break away from the simple A-B rhyme schemes and quick-fire stagger rhyme, “coz it’s fun man, it’s the best part ever”. While he humbly describes his style as simply being “chilled out”, he re-adjusts his flat cap and sits forward in his chair, as the conversation takes a more serious turn to the nature of his creative process. “I have a notebook that I carry coz I’m always just writing because I just love language and the construction of words. I adapt the way I speak and it’s just me…in this notebook.”

Reading “on the constant” plays a big role in his writing process. “I read enough to have a vocabulary. It’s based on vocabulary, you have to have a developed vocabulary. Some cats are just more blessed than others, like Rimestein, that man’s Afrikaans vocabulary is probably one of the illest I’ve ever heard”. One of Diff’s more compelling qualities is the respect and adoration he holds for his fellow wordsmiths. He appears almost star-struck when he mentions artists like Ewok and Rimestein, despite arguably being held in the same category. “You can’t be writing, and not read. That just doesn’t make sense. In order for you to put out you need to take in as well”. I’m slightly surprised when he mentions Fanon. Not because Different seems ignorant, but because I was unaware of the influence a writer like Fanon may have on hip hop and spoken word.

“I like drawing on what’s happening in front of me, I’d find all ways how that topic impacts me and my surroundings. Like the other night I had this crazy conversation with a lady at BP about Tik. It was a 5 min conversation and she told me about what happened with her brother and with her cousin because of Tik”. When being peppered about the fundamentals to his creative process he concedes that he first writes on his phone, and then copies it down into his notebook. “You can’t write something once and think it’s gonna be perfect. Not for me. It’s not gonna be perfect. You work on it, you write it over ten, fifteen times. You chop away. Me, I first think it through, you know? Okay, this is the beginning and I want it to end like this. So, the journey has to end here. And that adds a sense of structure to it. But with freestyling man, you just take that leap. You just open your mouth and you see where you end up.”

The second time Different takes me by surprise, is when he mentions that he doesn’t enjoy “freestyle”. “I’m never happy with it, it’s always just me making gat. I mean, when we have a gig we do leave an element for freestyling for crowd interaction – that’s the best way of interacting with a crowd, is going amongst them and freestyling about where we find ourselves. That’s why we do it you know? Just comment on the immediate situation where we find ourselves, and to show a bit of skill you know? Like some lyrical skill comes into the element of freestyling. But it adds that immediate sense of enjoyment like “yoh, that’s dope!” you know?” He pauses and reflects on the balance between spoken word as an aesthetic display of word skill and the connectivity between performer and audience and the message it encapsulates. To Diff, it seems, the ink flows from the tension between the individual and their environment.

“I comment on things that I see, outside and shit. I know there should be people that relate to it always, but I don’t do it for the relation factor just to get likes on Facebook. Because you’re moved, something happens. And that’s why you go to the page, you know. Just taking notice of things. Sometimes it becomes too much to carry this overwhelming experience, I don’t like carrying it man, I like putting it down on the page so I can remember it”.

Different’s immersion in hip hop is undeniable. His speech, his dress and his attitude all speak of his persona’s integration into the culture. But – and this is the germ of the person known as Adrian Different – he’s authentic. From the moment he started listening to Prophets of da City (POC), and illegally tagging “Diff-erent” on public spaces, hip hop has been interwoven into his maturation and development as man, and performer. “Listening to DJ Ready D and Prophets felt so rebellious man. Because it was like, damn, they’re actually saying shit. I’m like eight or nine and oh fuck, they’re actually saying shit about where I’m from. What I like about it is the culture. Rap forms part of the culture – the whole concept of everything fusing together, making one major element, which is yourself, and how you must have knowledge about yourself and where you come from. And I like history. So, hip hop was a culture that was one of the teachings that told me, yoh, you need to know where you stand, where you come from, all these things in order for someone to take you seriously. That knowledge of self was the element that got me from day one”.

Despite having shared the stage with the likes of Zapiro, Marlene van Niekerk and Antjie Krog, Different admits that some people still struggle to take him seriously and that he’s occasionally treated like a stereotype. “Stellenbosch is a beautifully fucked up place. When I got here in 2007, people were always ‘joking’ about me being coloured, they’d say some shit like ‘oh don’t pull out a knife’ – you know? Always ‘joking’, but still. And my response would be just to write”. To make his point, he raps out a couple of lines from his famous piece “So-Called Coloured”: “I have a brother who hasn’t spent time in Polsmoor Penitentiary, I have a sister who hasn’t been a statistic of teenage pregnancy, I have a father who’s still around who doesn’t drink himself into a stupor on papsak, better known as Elsie’s Geluk, and no, as you can see, I definitely don’t do tik”. He points to his frame and laughs, “Coz you know Tik usually makes you thin and shit”.

Different acknowledges the volatile space of Stellenbosch as having blessed him with encounters that have helped him to deal with issues such as racial prejudice, and more importantly, providing inspiration for his passion: “At the end of the day, I really don’t give a fuck if I’m a stereotype or not. I don’t write for anybody man, I write for myself. Interactions that I’ve had that I think are special. Things that trigger me like, ‘yoh, that’s dope’. And I wouldn’t mind if you give me some of your earspace”. He shrugs and laughs. “I’m chilled out”.

Words and photo by MEG