You may have read this article on Africa Is A Country about Stellenbosch and all the inequalities that accrue to a corner of the Cape Winelands that has long been a bastion of white privilege. It’s clear to anyone who isn’t a denialist that Sam Cooke’s Change is Gonna Come hasn’t had much of an airing in Stellenbosch, where the housewives drive R900k Land Cruisers and there are different Spars so that the haves don’t have to rub shoulders with the grimy hoi-palloi who pick their grapes and sweep their floors.

However, if you care to venture away from the suburban sprawl, you may encounter new areas where interesting things are going on. One such space is Kayamandi, the township that abuts central Stellenbosch like a five o’clock shadow, the township into which the workers disappear after work. Amid the hustle and bustle of the township, the resounding strains of free verse, staggered rhyme and the clatter of ideological barriers breaking down rings out in the night.

At the beginning of last year I became involved with the literary collective SLiPNet. I want to describe what I witnessed on the evening of 26 March impartially, in a way that pays testament to the extraordinary nature of what the SLiP team puts together once a month at the AmaZink eatery (itself an intriguing space). I’m afraid, though, that I can’t put it in those terms: I know it too well.

I’ve been going to InZync for three years now, since it began in 2011 as the brainchild of maverick professor Leon De Kock and the truly visionary poet and public rabble-rousing intellectual Pieter Odendaal. In that time, I’ve witnessed gigs of all sizes, from a crowd of 50 to a seam-bursting 350-strong group of disciples hungry for poetry. I’ve seen InZync happen in old theatres and school halls more suited to genteel ballet recitals. I’ve seen InZync’s stage play host to superstar poets and to local hip hop crews eager for their first break.

I’m a lazy poetry fan, by any measure. I like Allen Ginsberg. I can rattle off a bit of Gil Scott Heron, given prompting. But what I’ve witnessed over the years at the InZync sessions has done a lot to convince me of the merits of poetry as a liberating device. Session after session, poet after poet, forging connections across culture, across age groups, across the divides of our society. I’ve watched cynical black youths burst into spontaneous applause as an old white man performed in the flawless isiXhosa of their grandparents.

All of this is by way of explaining why I’m standing in the amphitheatre of AmaZink on this cold night watching the pre-event bustle ahead of InZync’s third birthday. I’m watching the crowd – mostly young hipsters and hip-hop cats, with a fair smattering of the older crowd thrown in. Poets and partygoers mingle, swapping expectations and reminiscences over drinks and boerewors rolls. Cultures meet over a shared cigarette, and people link up with someone who can help them translate the Afrikaans, interpret the Xhosa, or just explain who’s who in this poetic zoo.

Over in the shadows I see Adrian Different sharing a quiet chuckle with Allison-Claire Hoskins and Kate Ellis-Cole, two InZync poets whose voices have grown stronger and more fluent with each outing. Adrian’s looking relaxed, as he always does, but I know that his calm exterior hides a power-poet who can get the crowd on their feet easily.

The last of the shuttles bearing people in from sleepy campus arrives, and we’re ushered into the building. Adrian appears again, this time under the bright lights of the stage. He grabs a mic and starts a rap, warming up the audience for what’s about to happen.

The first strange thing about being here is the immediate sense of hospitality that settles on the crowd: Everyone’s here to have a good time and even the first-timers in the audience are soon bopping heads and clapping hands in time with the emcee. It’s clear that the evening is made possible by the mutual energies of those on stage and those in the crowd.

The second strange thing is how telepathic the relationship between audience and performer is. The first poet on stage, Mbongeni Nomkonwana, is well-known on the Western Cape poetry scene, and he lays out a paean to the natural world that’s at once percussive and delicate: “Let’s gravitate our souls back to the roots that once kept us grounded,” he advises, stringing together metaphors and similes in a dazzling display. “Rain is God overwhelmed by art,” Mbongeni tells us, in a poem that leaves the crowd reeling with pleasure. Then he turns up the temperature with a poem about the dizzying dangers of sexual temptation: “Do not dip your brush into untested paint,” he cautions wryly. He has the audience’s ear, and he knows it. Calling himself a young man with an old man’s wisdom, Mbongeni introduces his final poem, a rousing appraisal of where we are now as a country, post-Apartheid, post-Madiba, post-rainbow. “We stopped singing the revolution songs too early,” he says with chilling effect. The audience are on their feet, stomping, hooting, waving fists in the air, and I think “this is like nothing else I’ve ever seen.” 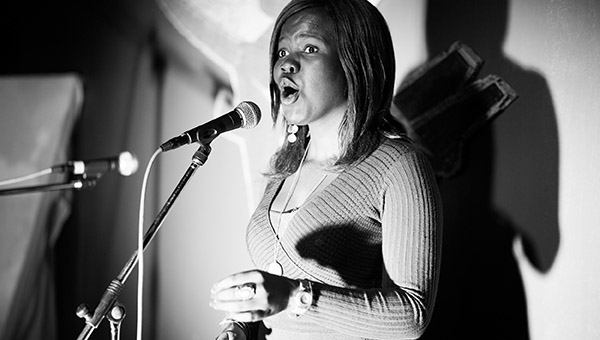 We run into the Open Mic session, an opportunity for anyone who signs up to stand on stage and perform their feelings. Each poet brings a different energy with them. Some are upbeat and energetic, others sombre or thoughtful. The audience laps all of it up. Kate Ellis-Cole and Kyle Louw try out a new duet they’ve been working on. It plays to each of their strengths, although Kate seems a little nervous. Then Faith comes up, and gives us a heartwrenching poem about a land of absent fathers – “uthata” being the refrain that calls to mind the father we all lost last year.

Godessa’s Burni Aman is next on the billing. I remember the hip hop trio’s blazing feminist anthems from when I was in high school, and I wonder if this younger audience will be able to identify. My fears are allayed as Burni’s set electrifies the room. Her rapping is fiery, each verse stringing together clever hooks and potent political punches. She’s a highly regarded veteran of the national hip hop movement, and it’s clear to see why. 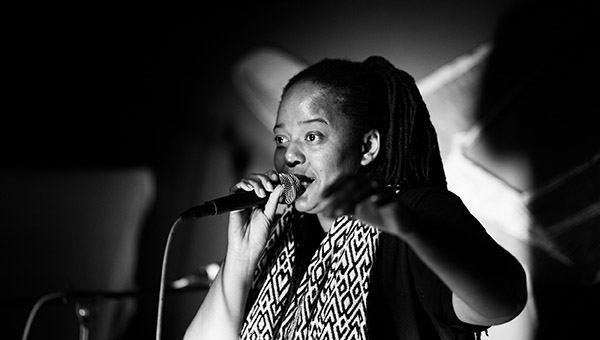 We go to the intermission and the congregants, drunk on rhythm and rhyme, spill out to puff on a cigarette and discuss what they’ve seen. Everyone is enthused by the quality of the poets tonight. Clusters congregate under the stars to discuss whether they’d have the nerve to do it, who they think is the best poet, and to swap stories about their favourite InZync sessions. I wander across to the other side of the building, where a happening hipster with a djembe drum is beating out a madcap solo, daring another drummer to try and keep up. The other man falls into step with him and they reach a dizzying crescendo, to the joy of those who have gathered to watch them. As suddenly as they begin, they cease, rubbing stinging palms with a satisfied look on their faces.

Adrian beckons us all inside, laying a provocative question before us: “What do you do, when the city only works for a few?” While we mull over that, Adrian introduces Maria Geustyn, whose poem “Open Heart Surgery” is an anatomic-emotional plea for a deeper connection between lovers. I’ve heard Maria do this poem a couple of times, and it still has the same kick – it reaches into your chest and grabs at your heartstrings and pulls you closer.

The night’s main buzz is around the Aussie poet Luka Lesson. A man of formidable talent, his cheeky grin and charming wit beguiles the crowd. He banters with the audience, introducing himself affably and drawing them into his confidence before belting out “The New Crusades”, an angry rap about war and peace, where he tells us that he’s “Jesus, Houdini and a Genie combined.” It’s a poem that has the audience climbing out of their seats, baying for more. Luka gives it to them with “Please Resist Me”, an anthemic exercise in irony and subversion that anyone who has ever felt alienated by the spaces they find themselves in will identify with.

Luka himself is of immigrant stock, and he explains his Greek origins by way of introduction. The crowd have warmed to their headline act, with women cat-calling him and everyone else on the edge of their seats, excited to hear more. He obliges with “A to Z”, getting the audience to chant the letters of the alphabet as he answers with an agile alliterative set of rhythms which leaves the audience spellbound. Then it’s “Amber Lights”, a poem about growing up on the margins of society.

Luka turns introspective for his next number, “Yiayia”, a tribute to his grandmother’s wisdom:

The girl on my left sighs appreciatively. I think the whole audience does. Luka has us all eating out of his hand, and the sighs turn to swoons as he clutches the mic seductively and gives us a richly sensual rendition of “The Confluence”, a teasing sex-kissed poem that makes the women around me cry out with the thrill of it all. Luka brings the house down, and I get the feeling that’s what he came to do. 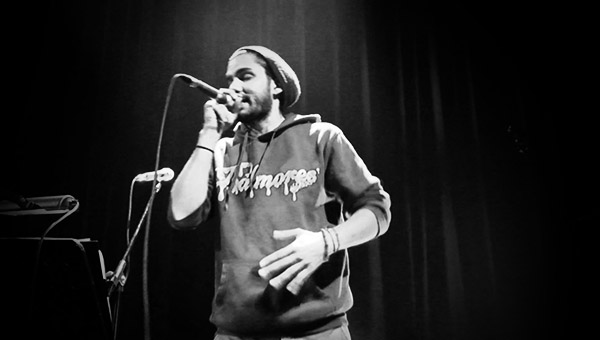 The evening draws to a close. We hear a recital by one of InZync’s poetry workshop protégés, reminding us that poetry starts with the young. The talent they display draws a warm response from the crowd, and I can see that the young poets themselves have been inspired by the reception they receive. It’s gratifying to bear witness to this melting pot, where transformation is driven by poetry in ways that I would never have thought possible. The last poet, Lwanda Sindaphi from Cape Town’s Lingua Franca collective, simply drives the point home: poetry is about forging connections that cut across the spatial and class differences of our country.

That, ultimately, is the biggest surprise for me as InZync’s third birthday comes to a close: how new and exciting it still is, three years on, and how all that passion and talent comes together in a town notorious for being the crucible of hatred and division. InZync is emblematic of what Stellenbosch could be – it’s transformation made visible.