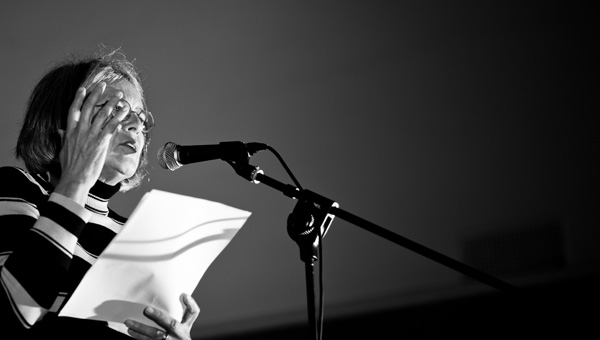 I’m not sure if it was the spirit of Heritage Month, but stories were definitely on the loose. From the trains, to Town, and to Open Book Festival, people were talking books, politics, and history. There would be only one reason why I would trade the overcrowded bustle and buzz of Town for the claustrophobia of Stellenbosch: InZync Poetry Session.

The first Friday of every month is the one temporary and fleeting moment in Stellenbosch when the fresh, the vintage, and the strange all gather to listen to the featured poets and the anything-can-happen-open mic. However, this month the poster of two boys sitting in a doorway framed by rubble hinted that things were going to be done differently. I might add, thankfully so.

The usual structure of 3 poets per session was expanded to feature poetry collectives from UWC, Stellenbosch, as well as the winners from the Drama for Life (DFL) Poetry competition. In addition to this, the evening was graced with performances by Toni Stuart and Antjie Krog.

The line-up was dik with poetic potential. At the rather strange, school-like venue, with a stoep from where boerewors, veggie burgers, and refreshments were sold, staff dressed in black welcomed the crowd with smiles. The clock struck 19:00 and people streamed in from all corners: a bus from UWC, the shuttle from Kayamandi, and others using their voetebikes and cars. Before my veggie burger was done, the venue was already filled with an audience of about 250 people. 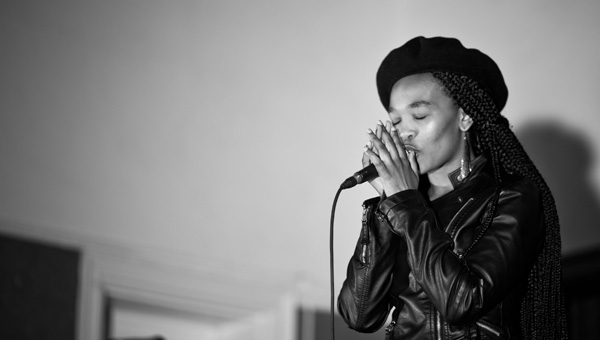 The session was opened with a brief introduction by regular InZync MC, Adrian Different, who then handed over to the host from UWC, Bronwyn Pedro. The first performer was Khanyisile Mbongwa, a regular InZync performer. However, this time she introduced herself in the persona of Lola Amira, a prostitute that spoke to the concrete, the conceit, and the complicated entanglements with the female black body. Following Khanyi, the audience was then swept away by Toni Stuart’s poetry. She spoke, or rather, sang her words of the wind. This opened up the stage for the winners of the DFL Poetry competition, Coco Putuma and Mbongeni Nomkonwana. Both these poets reflected on the theme of the DFL poetry competition which was sex, relationships, and HIV/Aids. Coco, who has previously featured on the InZync stage, brought her original word play and style. Mbongeni brought a subtle soft-spoken narrative of a parallel journey of becoming a man, and the experience of an HIV/Aids test which culminated in a line that lingered in my head: “I walked out negative with a positive attitude.” At this point, the stage was on fire. That is, until Antjie Krog stepped up and burnt the shit down!

Perhaps it was the energy of the young voices, but this was the best performance I’ve seen by Antjie Krog. Her poems were vibrant, shamanic incantations that had the audience mesmerised. She ended her performance with three poems in English and isiXhosa translation, recited in tandem with Koos Oosthuysen, who performed in isiXhosa. After this, a break was definitely needed. 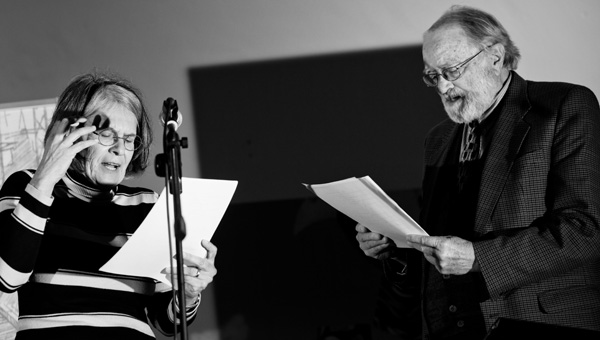 The second half was ushered in by Allison or, as I like to call her, Allison Awesome. This was the first time I’d seen Allison host and she did a brilliant job. Future InZync host? Adrian had better watch out. The crowd was stocked up on boerwors and refreshments, ready to go.

This half saw more of the student poets take the stage. These included Joy Ryan, who did a brilliant first time performance, Kgotso Klaas who enchanted yet again with his critical and intergalactic insights and Shirmoney Rhode with her subliminal afro-power and linguistic style. Also in the line-up was Kate Ellis-Cole, elegant as always, who delivered another one of her paradoxically hard-core poems, pointing out that although she might not have a dick, she still has more balls than any guy ever will; and Suné van Rooyen, whose poems reminded us of the stories on the winds from the Northern Cape. Last but not least, former InZync slam winner, Vuyo Booi-Mtimde, carried the crowd away with her energetic praise poetry. The night was too short. I wished we could continue dancing between the ellipses of the Stellenbosch evening. I wished Poetry could have stayed over for the night. 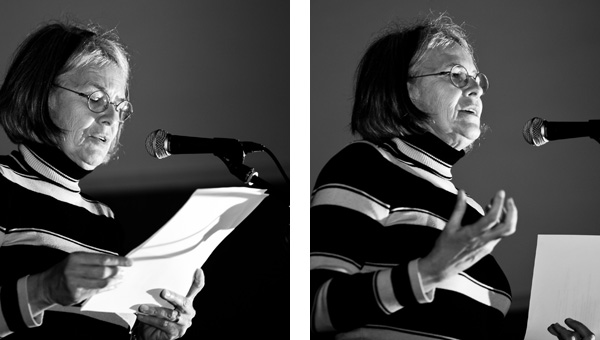 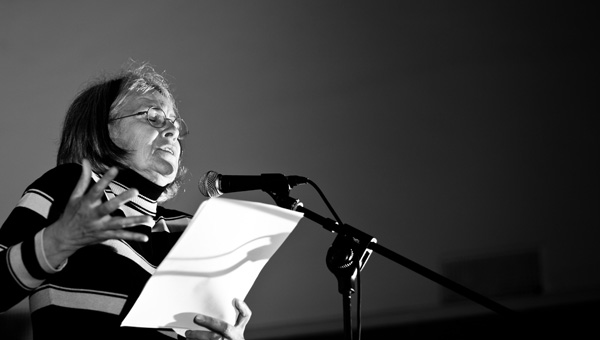 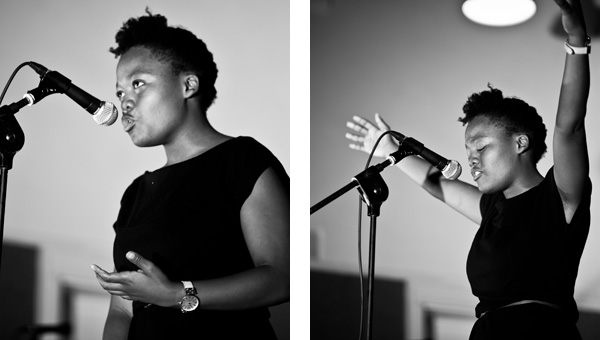 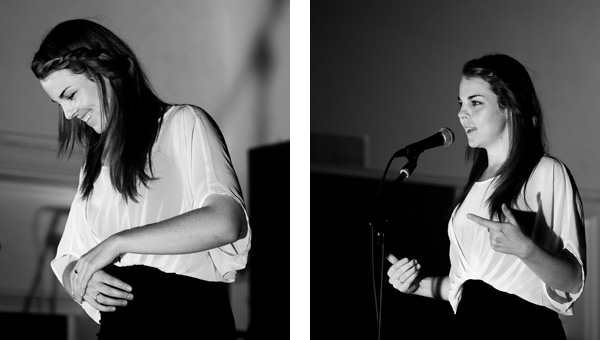 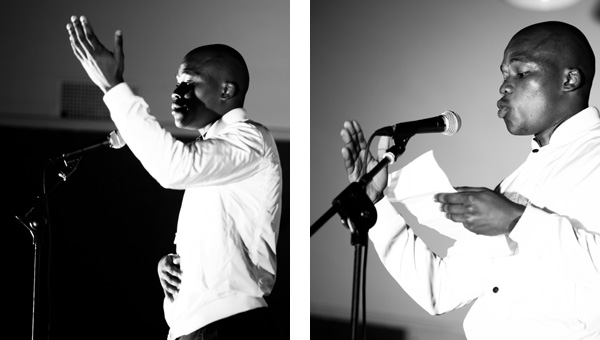 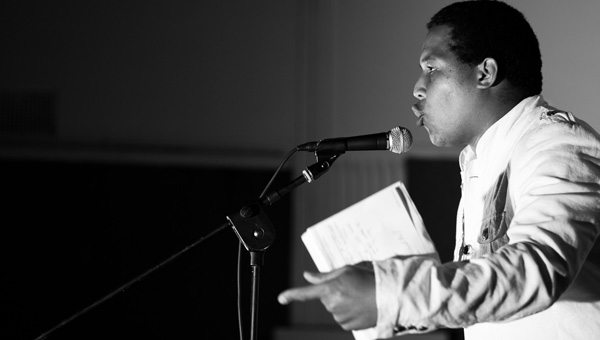 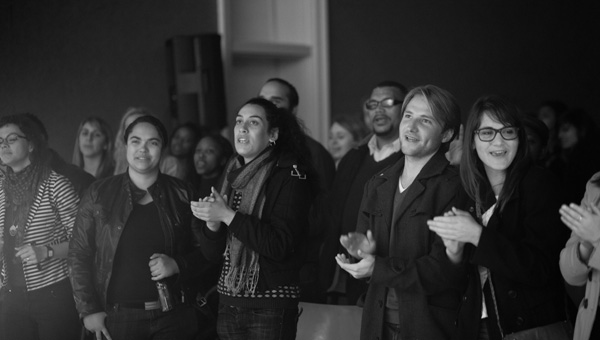