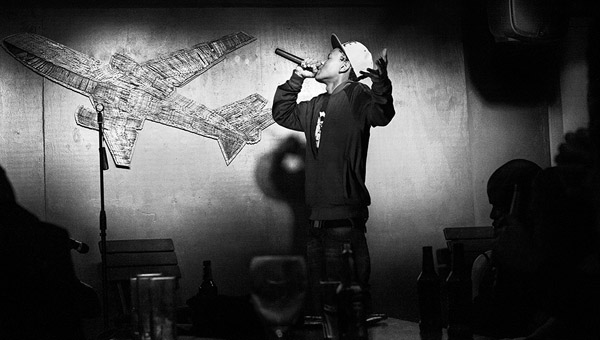 On the evening of 2 August 2013, SLiP kicked off the new term with another successful night of beats, rhymes and creativity. In addition to the regular open mic session, the lineup featured the three winning poets from the recent InZync Poetry Slam, as well as Toni Stuart, and the house was once again packed with poetry enthusiasts and wordsmiths.

The festivities opened with guitarist Monwabisi Xhakane and Vuyo Mgijima on percussion seducing the crowd with acoustic harmonies before emcee Adrian Different and Rimestein joined them on stage to set the pace for the night in explosive fashion, despite proclaiming that they’re “so chilled out”. Their stage presence was electric and sparked immediate audience participation as the room chanted in chorus to Different’s challenge: “Is julle innie huis?” Their next number, fittingly titled “Nature Happens” was a display of natural talent let loose in creative fashion as they showcased the “power of their pen”. 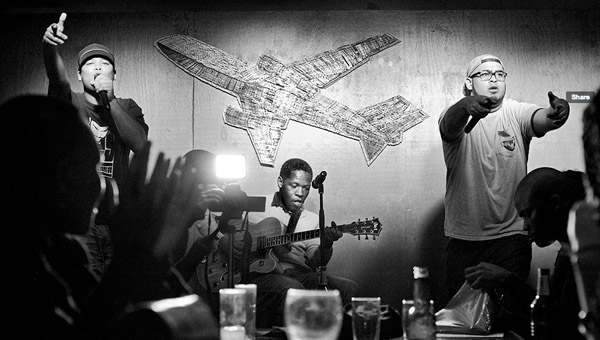 Alison-Claire Hoskins kicked off the open mic session with her powerful piece “Red Tape” – a response to the recent anti-rape protests held on the Rooiplein of the Maties campus in which participants wore pieces of tape across their mouths to protest the violent gang rape of Anene Booysen in early February. Hoskins’ performance debunks the metaphorics of the tape as projecting negative stigmatisation concerning rape and interprets the image as a negation to speaking out about the trauma and injustice of rape. Similarly, another open mic poet, Louis Roux, traced the same response to the “verkragtingskrisis” in South Africa, and condones “taking off the tape” as opposed to “keeping it on and keeping silent”. While Hoskins’s poem employed a subtle and sophisticated metaphorical scope that developed the “red tape metaphor” to encompass social restrictions, Roux’s metaphoric language was less effective and perhaps somewhat obvious as he made the predictable jump from “red” to “bloed” (blood). 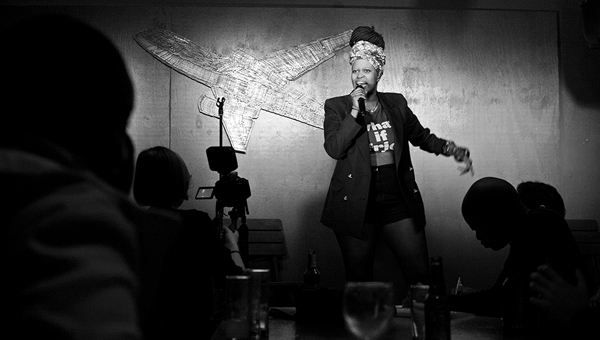 In a completely different vein, Kyle’s poem addressed society’s technological dependence and lamented the mediation of our true feelings and experiences through social media platforms. His play on social media terms such as “liking”, “follow” and “update” was cleverly presented in the juxtaposition of imagery carried in the ambivalence of these terms. Through the use of provocative lines such as “someone followed you on Twitter, why can’t you follow your dreams?” and “You took a selfie on Instagram, but hate yourself in the mirror”, Kyle established the theme quite clearly, before taking out his cell phone and proclaiming “we’re the one with the brains. This has limited battery life, yet we’re the ones it drains” and sending the message home as he ended with “don’t forget to send me a status update about how your life is passing you by”. Ironically, the effectiveness of Kyle’s performance reaches full circle in this report, as the immediacy and “realness” of the performance is once again, and in contradictory fashion, encapsulated in mediated form and released on various social media platforms. How very Plato of him.

Pieter Odendaal’s “Vir Oupa Piet”, which opened with the suggestive line “dood voor ek gebore is” addresses his identity as Afrikaner, South African, male and human as he states “ek dra my voorouers op my gesig, ’n collage van wie ek is” in sensitive and succinct fashion, and was a definite highlight of the open mic.

With the open mic done, the headliners were up. Heralded as a “battlechamp” by Different, Verrassing defended his heavyweight title with a 10 minute freestyle, he titled “So what”, a free-flowing smithery of words about “life on the daily” delivered in an amalgamation of tongues, rhymes, tempo’s and even attitudes. A chat to the man after his performance revealed that, as an underground hip hop artist, he draws on daily things that manifest in our mind and uses that element to broaden his perspective on what it is that he’s faced with as an individual, the conceptualisation of which is presented in the dynamic elements of his performance. Verrassing switches from Afrikaans, to English, to Xhosa to French, speeds up and slows down the tempo, changes from stagger-rhyme to iambic pentameter to manipulate the beat, and produces a cosmos of creative, cultural and social spheres, all of which gravitate around him, the individual.

Kate Ellis-Cole picked up on the theme she addressed in the Autumn Slam and moved from the politics associated with the power of language and speech to the nature of conversations, with a slightly disappointing performance. I mean, let’s get one thing straight: This chick can write. Ellis-Cole exudes poetry and while her talent is undeniable, her performance on the night lacked one thing: new material. Seasoned InZync-goers would have recognised “The Man with the Spear”, “Speaking Words” and the infamous “F-words”, and, indeed, the support and following of the crowd drew clamorous cheers, but it was the deliverance of fresh material that definitely spiked the enthusiasm and she can be certain that the audience were left hungry for more. Thabiso ended off the round of Poetry Slam winners with a satirical piece linking the political with the personal and showed why he won the previous slam

Fittingly, the night ended on a high note as the best was kept for last: Toni Stuart. Her delivery of fresh musings on the quotidian proves that poetry is to be found everywhere and needn’t be weighed down by existential contemplations or hefty subject matter. From writing about commonly felt, human emotions such as love and heartbreak, to the pure exhilaration of going for a morning run or watching skilled B-boys strut their stuff, Stuart’s profound skill lies in the delicate description of the beauty contained in each of these moments. Her poetry encapsulates both soul and the ordinary, sensitivity and resilience, emotion and observation, all draped in skill and talent, and she ended the night on a high that was sure to be carried far into the early hours of the morning.

All photos by Hylton Boucher. 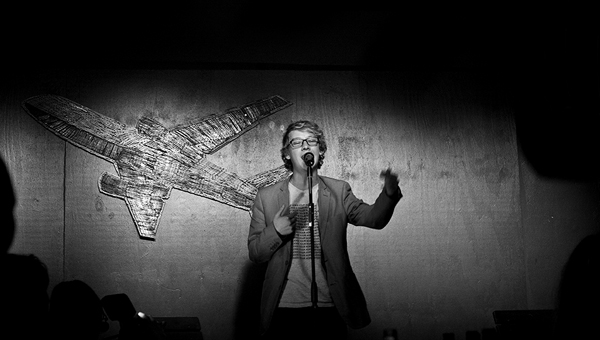 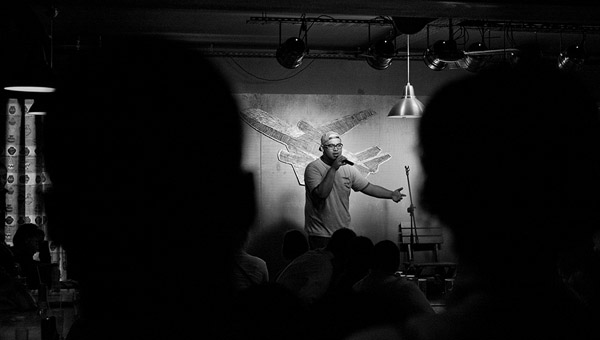 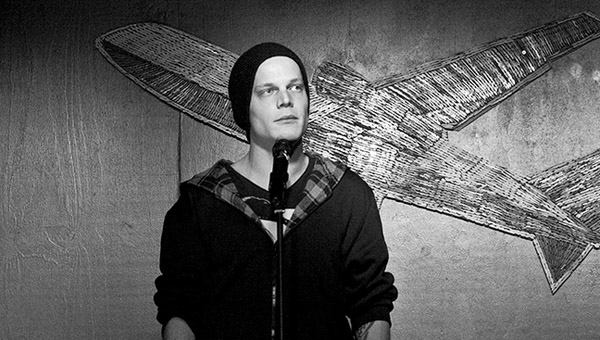 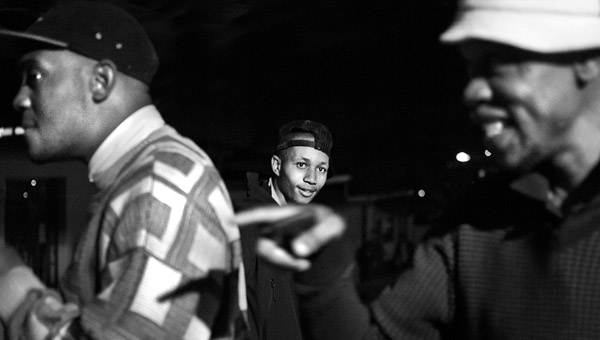 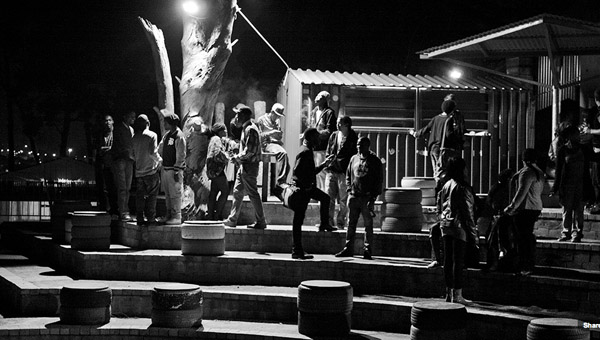