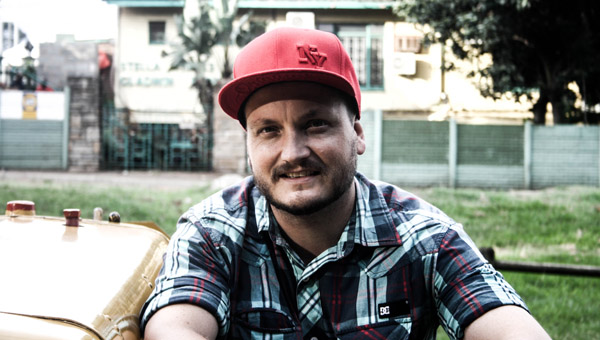 In my mind, interviewing someone like Iain Robinson was going to go one of two ways. I was possibly going to be confronted with a self-important, pseudo-intellectual who took any chance to talk utter shit while believing it all to be the gospel. Alternatively I could be dealing with an obnoxious stereotype, trying desperately to fit into a culture so far removed from his personal experiences that it was embarrassing. Although I didn’t know what to expect of Ewok himself, I was well aware as to whom I was dealing with here in terms of reputation and talent, so I sat nervously waiting for this mysterious person to enter the pub where we were finally scheduled to meet. He came in, dressed just how I had imagined: NY cap, relatively baggy pants and a presence about him that I can only describe, for lack of a better word, as absolute swagger.

I break the ice by asking him what name I should actually be calling him. He is notorious for his litany of stage names and nicknames including, Ewok, Creamy, Uncle E, Baggends or simply an amalgamation of the lot. He assures me I can pretty much call him what I want, as he finds he can then identify with how that person knows him. It was at this time that I realised that I was horribly wrong in my initial assumptions. Simply put, this guy wasn’t anything I could have anticipated, he was real and raw and honest and this threw me off.

For the sake of readers less familiar with this lyrical genius, I proceed to ask him to give us a standard “Who is Ewok” summary and without hesitation, he almost rhythmically answers: “Ewok is a spoken word flavoured hip-hop artist based in Durban South Africa but internationally comfortable.” Apparently, that was the first time he’d used that line. I cite some stalkerish background information and Ewok finds it quite entertaining that he’d been researched – a small display of humbleness which indicates that he’s very much human and I find myself relaxing into my chair while feeling subconsciously guilty about all my earlier preconceptions.

Ewok has pretty much done it all: Rapping, spoken word, production and stage acting. He also lends his voice at times to charitable causes and initiatives he feels passionate about. I asked him if there was any avenue or project out of the litany of things that he has dabbled in that he regrets or would never return to. He looks up, prepares to answer and for the first time I get a pause and a “ah man that’s such a good question”.

He asks to for us to come back to it later, so we move on. I’m curious to hear his take on the parallels that exist between theatre and poetry, with hip hop and rap. Ewok mentions the technique of performing on stage, unamplified, as the most obvious similarity. “Recognising your voice as an instrument is pretty important,” he says, and it’s clear that the drama and theatre training goes hand in hand with his ability to keep a crowd enamoured. I ask him to differentiate between rap, poetry and spoken word for the average lay person and he goes back to our previous theme by stating “rap is poetry” and explains that hip-hop is a post-modern art form.

“Spoken word is like the art of conversation. Spoken word artists simply have a conversation with the audience, that is pretty one sided. I mean the audience does respond and engage to a certain degree but obviously there is no room for actual dialogue. Spoken word really is about the performance of self – it’s about making the audience realise that this is you, this is who you are, through performance. You do have to up you game and use things like heightened language in order to successfully do this. It also has to be as honest as possible as the first thing that will give you away is any lack of integrity.” He then mentions the importance of keeping it off the page, to make sure that it doesn’t turn into a form of testimony.

As I’m about to continue he offers me a shot of tequila. I politely decline, but he requests a cold shot of Jose and knocks it back without blinking. Once again we go from hip-hop artist to English enthusiast and back to straight-up G.

Just when you think that this guy can’t possibly have his fingers in any more pies, he let’s me know that he also has a blog that he uses as a means of archiving his work and inspirations. He has such a smorgasbord of interests from poetry to the political and somehow keeps on top of all of them.

Durban has been Ewok’s stomping ground, making it understandable how his roots have grown deep within the soil of the 031. His life has been an interesting contradiction in itself: he spent some of his youth growing up within the bright city lights of America and then moved to the small town of Empangeni – a sugar cane farming area in KwaZulu-Natal. Country boy and city boy – all the more experience to give this kid his encompassing perception of life. He smiles as he reminisces about his old school friends, saying that most of the kids that he “gravitated towards and orbited around, were free thinkers”. Birds of a feather, right?

We redirect the conversation back to the hip-hop side of things – “my religion”, as he dubs it. I ask him how he manages to stay so up to date with current affairs and political issues in between being a badass. He cites the influence of the type of hip-hop that he grew up with – a form of political consciousness and awareness – at odds with the type of hip-hop featuring bottles of Crystal and “thick bitches making it clap”. He elaborates on this by breaking down the industry into artists that are liked simply for being rappers and then those who are appreciated for what they actually rap about. Ewok found his inspiration within the hardcore underground guys who he viewed as pretty uncompromising about anything. The thing that links all the artists he appreciates, says Ewok, is the fact that they were all very literate and educated people who were able to drop quotes and references that could still be appreciated 10 years later. For Ewok, the art of hip-hop is purely about expanding your mind and expression through a raw form of music and art.

It’s a rather obvious connection, the love of English and its translation into his type of music, but one that is rarely seen so passionately appreciated – which is probably why Ewok is so respected on the scene. He goes on to tell me about how reading actually changed his life. When he first moved from the thriving metropolis of Empangeni to Glenwood High School and became the new kid, he didn’t have any friends. As a result, he spent his breaks keeping to himself and immersing his mind in a book. That was until a kid from his class walked by and sparked a conversation with him, inviting him into his circles and initiating a bond with someone who would turn out to be one of his best friends. It becomes even more understandable why Ewok attaches so much value to reading and his interests and personas start to seem like much less of a contradiction, but more of a natural and organic progression.

Bringing in my own experience with poetry, I return to the setlist of questions and ask him about his obvious ability to empathise, an ability that is evident in a few of his pieces. Ewok often writes politically about things that he may not have experienced first hand, and as a result, public opinions are quickly formed. I focus on his relatively recent Marikana Tribute, where reactions varied from support of his intentions to opinions that he had no place rapping about something that he was so far removed from. I want to know how he felt about the negative responses. Ewok retorts, articulate as always:

If you have a problem with some of the stuff I write, you’re having a reaction to the fact that you don’t know where you stand with it. You haven't solidified how you feel and when you hear someone else with an obvious solid opinion, so you react. For me this piece was as a result of research, it wasn’t just reactionary. I waited for all the facts and sides to come to light after I was commissioned to write it for a public meeting on the matter.

However, the G in him comes out and he continues by leaning over, talking directly into the dictaphone as if it were one of his haters.

The hip-hop artist in me actually just wants to say fuck you, let’s battle. I write about things I wasn’t necessarily personally involved in because I have chosen to be affected by it instead of just having a general opinion and letting it slide by. At the end of the day, I just want to say to those commenting that I’m glad that I can make you feel like someone.

And that’s how it’s done.

As I am about to round up the interview with a final question about his future, he looks up from his phone with a look of relief and, going back to the question that stumped him, says:

I’ve just realised that I’ve never done any project that I regret. I’ve definitely done some things that were cringe-worthy but I’ve really been thinking about it and I try as much as possible to pull fucking anything from even the failures. I’ve never had a really intensely bad experience.

At the end of the day, physically meeting Ewok was what made me understand his talent and inspirations. The standard questions that you can find answers to in any interview, will never convey Ewok as a whole, composite person and getting to know him, if even for two hours, in the moments of uncontrolled laughter or tequila drinking, told me more about this human than the actual prepared interview ever could. It was a refreshing experience to sit and discover a regular person using all his passion to do extraordinary things. At the end of the day, that is all that you truly need to know and understand about Iain Ewok Robinson in order to be inspired by him. The rest is just noise.