Harder and louder than breathing 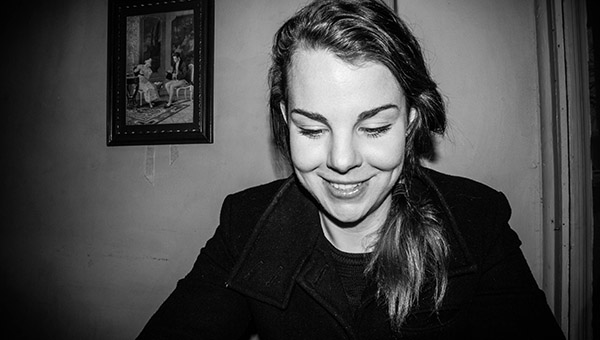 Kate Ellis-Cole is an enigma. Always perfectly styled, she carries herself with a secret confidence that’s almost regal. Grace and eloquence spill from her lips in conversation and it’s difficult not to form certain preconceived expectations when this soft-spoken lady steps on stage: she’s white, she’s a woman and she clearly sounds privileged. And then she opens her mouth. Kate’s poetry and subject matter are far from what the initial impression would lead one to expect. From political satire to the strong cross-cultural ties she experiences with land and country, her poetry reflects magnitudes of conscientious and sensitive living and there’s something about her and the unapologetic sincerity with which she speaks and performs that’s endearing and mesmerising.

“I think it’s because I don’t try to get up there and speak with pomp and ceremony. There’s nothing affected about what I want to talk about. There’s a conversational aspect to that and I think people enjoy it.” When pressed whether she’s aware of the initial impression she conveys, and whether it affects her performance, she admits that it does play a part, especially to surprise the audience. “I have strong conservative streaks. I’m this straight-laced, academic girl. But I absolutely play to that. I love saying ‘fuck’ in front of an audience”. Yet the “fuck’s” she spits aren’t purely used for shock-effect. There’s thought behind them. Anyone who’s seen her perform her infamous “F-words” can attest to the skill with which Kate writes. She puns, expands and transcends.

Her talent germinates from the unabashed passion she has for words. I’ve never met anyone who’s as obsessed with punctuation, definitions or semantics as Kate is. She somewhat sheepishly admits that she’s read a dictionary from cover to cover, and as the blush blossoms on her cheeks the slight dimples around her smile reveal the truth: pure and simply, words form a part of Kate’s being. “I was four years old when I learned to read. And my way of teaching myself to read was to label things that I drew. If I saw a word and I understood it, then I’d transcribe it. And it sort of became how I understood things, and how I saw the world.” The practice to pen the world down continued and at the age of ten, she received her first journal. “I just started annotating my life. And then, when I hit the angsty teenage years that’s when the actual stanza and verse poetry happened. But writing has always just been what I do, you know? In my spare time, and when I’m bored, when I’m frustrated, when I’m excited, when I need to organise. It’s just how I make things make sense. You put it all together and then, decode”.

It seems almost natural, then, that her first performance stemmed from the same space. To Kate, spoken word is more personal and more biographical than poems read on paper, because the essence of the performer is so closely intertwined with the performance. “The first spoken word I did was about my dad. Not my biological dad, my adoptive dad – he’s the one who raised me. And I like to make the juxtaposition because he was raised by his Zulu nanny which, you know, speaks to our Apartheid past, sure, but it’s not so much about that. It’s more about the fact that she was his parent: race aside, geography aside, culture aside, the fact of the matter is, she raised him. And he then raised me. And that, I feel, was written very much for the audience, because at the end of it I go, ‘I want to talk to you and engage with you’ and I feel like I’m not just standing here and you’re looking at me going, ‘white girl what are you doing here’. Don’t discount what I’m saying based on my appearance. As Eminem says, ‘there’s a certain feeling you get when you spit and people are getting your shit’”. The discussion returns, once again, to her position as white, and to women in a generally male-dominated, hip-hop dominated, space and I’m lead to ask, again, what constituent to Kate, on stage, is pre-meditated, what is rehearsed, what is immediate and sincere – what is the something that makes her so great?

Kate explains that the larger body of her work springs from random happenstances that cross her path, and that she prefers not to force creative impulse. “I always feel like the writing for something is very difficult. Writing for an impersonal space is very difficult to me because of my biased idea of what poetry is as the space it inhabits in the world – it’s self-expression. So, usually I start writing to an impulse and I’ll see how far it gets me. Then I’ll leave it, I’ll let it stew. Usually what happens to me is a line, or an image comes into my head, something stupid and it’s usually not something particularly poetic, but I’m like ‘I can write about this’. And then it knits itself. It goes from being a line, to a helix and then it threads itself and works its way into a whole tapestry”. Kate’s explanation is poetic in itself and I wonder whether she realises this, that her mode of expression is poetry. When I ask her whether she knows this, she almost shyly explains that, to her, “inauthentic poetry is the worst kind” and that there’s nothing premeditated about her writing. 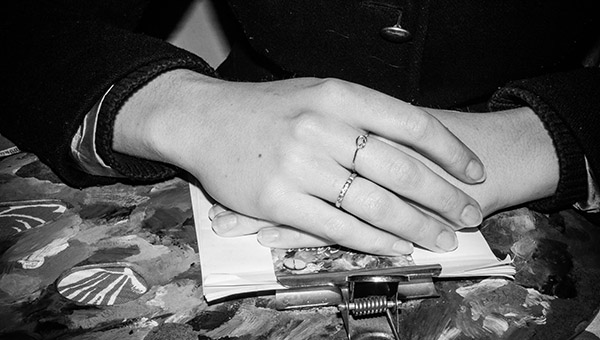 Our conversation turns to the nature of creative writing and the much discussed debate on inspiration vs. perspiration. Kate explains that, to her, the impulse or image or feeling always comes first. “Especially with stage poems. I’ll start writing and a beat will come out, and I want to follow it – I want to see where it goes.” She mentions that she sees her work in line with the Derridean theory of language and signs and their deconstruction. Derrida speaks about language and the deconstruction of the sign and, consequently, the signified – about “just letting it go, letting it run”. “I just play with words. I do use stagger rhyme for impact and effect, but mostly it’s just the words and how they come. But also because that’s what makes it a little cooler than talking. It’s not so much, ‘look what I can do with words’, but ‘look what words can do’. Put these words together and look what comes out of there. I’ve always felt that language is this really alive, really vital energetic way of engaging with the world. So it’s more to be sort of ‘words are fucking cool – look everybody!’”.

Despite her second place at the InZync Spring Slam ’12 and representing the InZync slam crew at the recent Cape Town Open Book Festival’s slam competition, Kate lists her performance with Antjie Krog as one of her highlights. “It was very daunting, because I’d done an Afrikaans poem and I’m not an Afrikaans first-language speaker. But afterwards, she came to me and shook my hand and said, ‘dit was so mooi’. And then she remembered me the second time I met her!”. It’s endearing to watch her become slightly star-struck as she recounts the experience, because her telling, and its passion, encapsulates so neatly that “something” about Kate: raw, unbridled authenticity.

“To me, poetry is not about how well your iambic pentameter matches up. It’s about how it makes you feel. How uncomfortable you can be. How comfortable can you be. For example, if the literal thought that goes through my mind is, “I wish I could fucking set myself on fire” I sit down and write and it’s not necessarily good but it feels like I’m set on fire – that’s the process, that’s why we keep doing it. It’s being alive, it’s breathing, except harder or louder than breathing. And, I don’t know, maybe that’s where the authenticity comes from. I’m not writing to be like “please like me”, I write because I have to write because if I don’t there’s a part of me that doesn’t make sense”.

According to Kate her favourite space to perform in is still the InZync poetry sessions, precisely because the audience that gathers here share a similar interest in the vibrancy of spoken word. “If you know that people are going to hear your poems it changes them from the get-go, it changes the writing stage. If you’re writing for yourself, there is no ‘I don’t care what you think of me’, but performance means that people are going to judge: that’s what they’re there for.” Kate admits that her stage poetry tends to be “quite angry” and “political”. “I like to talk about women’s rights, because I feel that my persona on stage is very different to the other feminine vibes that happen, being white and English, and given my age. So, I like to speak from that demographic.” She admits that she often feels daunted, because she’s a woman. “It shouldn’t matter, it really shouldn’t because it’s poetry but as a white woman I often feel I have something else to prove, that my credibility is hard-won. That’s why I like to talk about the body. To write to that space. To pull outside of the skin. I don’t want to inhabit the body. Let’s rather inhabit the space outside of the body.”

“That’s why I like the grass roots level of spoken word that InZync and SLiPnet are involved with. I love that it’s a huge conversation, it’s a way to encourage people to speak about their lives and their histories and their futures, especially along those scar tissue lines of apartheid: black, white, rich poor, high or low class. It all gets forgotten the moment you get on stage and all you have are words.” She smiles, and I feel like she’s about to tell me a secret. “Ewok says something like ‘poems won’t change the world, but it might change the way you think, and you might change the world’. And, you know, you can write things down, but once you’ve written them down and you speak them ... it’s LIFE. It makes it tangible, it makes it real – that’s what spoken word is for”.