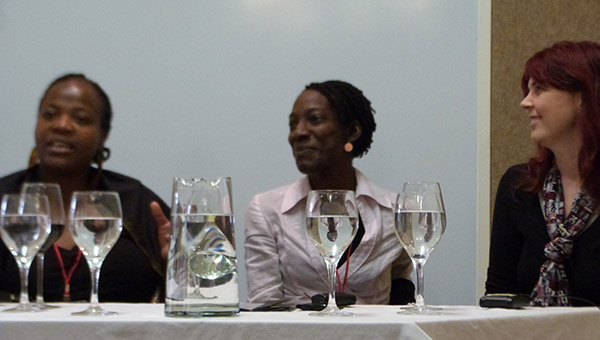 An event with Zukiswa Wanner (London Cape Town Joburg) cannot fail to be entertaining, and today she speaks on a panel with Tiah Beautement (This Day – due for release in August) and Yewande Omotoso (Bom Boy – which Wanner, to Omotoso's embarrassment, incites everyone to go and buy. “Don't ‘oh gosh’,” she scolds, “we're here to sell books!”). They make an eclectic group, all “activists” for writing in Africa. Aspiring writers, pay attention!

Beautement, heads up Short Story Day Africa – held on the shortest day of the year to encourage a new writing culture in Africa – and the best stories are published in an anthology. “I actually think it's dangerous,” Wanner adds, “Do you really want to create more writers?” A case of damned if you do, damned if you don't, Omotoso says, “because they'll happen! So you may as well get in there and help to make them better and better.” For Beautement, running workshops in primary schools, it's all about fighting the “standardised education”, which kills creativity in children. Problems include children appropriating what they read from a different context or continent, such as writing about snow, or, as Wanner says appalled, a black child writing about the feeling of the “wind rushing through her hair”. We need to do away with the notion that African writing is second-class “unless the Americans in America – or the Europeans – have said it's okay”.

Writivism is a separate creative society, but “married” to Short Story Day Africa, comprises mostly of creative writing workshops all over the country for anyone aged 18-30. Selected workshop participants are paired to an author, who mentors them for the short-list, although some mentors have been known to ditch contributors who will not work well with the mentors. The fourteen short-listed contributors are flown to Kampala, Uganda, where the awards ceremony is held, and the contributors in turn run small workshops in the local schools. Though they feel it is important to maintain one's own voice, they admit that sometimes the editing can result in a feeling of “loss”. However, Tiah, thoroughly supported by Wanner and Omotoso, praises her editor, saying that she has learned to take criticism, and the general consensus from the panel is that “you want to be a better writer more than you love your ego.” However, Wanner admits that she needs the comments to “simmer” after initial defensiveness, and Omotoso claims to know it's valid criticism even if she's angry. All three have a friend, or a group of them, who are the sounding boards for first drafts. Wanner also says, after a concern voiced by an audience member, that at the end of the day, it is still your name on the book – she had an editor tell her that her book The Madams needed to end in a different way, but she stuck to her guns and the ending won over the editor at the last.

A woman in the audience interrupts to praise the initiative for mobilising “wannabe writers” and young students. A matric student expresses her concern about editing group-work without imposing her own views. Omotoso talks about preserving “what they're trying to say”, but putting it in a way that best presents their point of view, even as distinct from one's personal ideas, and Wanner emphasises the importance of preserving what is authentic.

The next comment from the audience encourages the women to use this platform as “leverage.” I wonder to myself what she thinks they were doing? Tiah talks of being in contact with other organisations to build each other up with similar programs. Help To Read is an initiative mentioned, as the need to foster a more reading culture is imperative; and they are always looking for volunteers to ignite this sort of literary excitement. Another question wonders about the activism that propels the writers of Writivism. Both Wanner and Omotoso are adamant that it's not a pushing politics as such, they're only looking to ameliorate African writing, and “mentor the next generation of Chimamanda Adichies, Lauren Beukes' etc. etc.” But it is “advocacy” says Omotoso, these sort of activities are a sort of activism against indifferent teachers, and lack of imagination, and moreover, born of a desperate need for creativity even in the most “practical” of jobs.

In an age of apathetic literariness, it's a welcome call to arms.