On translations, toll-roads and gatekeeping

Charming Sanlam-sponsored, facebook-blue flags are draped tree to tree across the street. Quirky posters, signs, schedules, menus and middle-aged festival-goers linger about. The red flag reads WOORDFEES. Well, guess I’m in the right place. “Tazneem!” Ek hoor vir hom, voor ek vir hom sien. Hy kom aan gestap helmet in een hand, stukkende sak op sy rug, met sy Bob Marley irie-broek. Dankie tog, dis Pieter. We’re just in time, but almost late. We head towards the Boektent. Pieter disappears. I end up standing by myself outside the tent that Antjie Krog is about to perform in. Ek soek ’n light. Seems like I would have a better chance of stoking some fire by reminding everyone about the Cosatu strikes that are busy happening. I spot Pieter irie-broek appearing in the distance. I know he comes bearing light. Ons staan en rook. We talk about uncomfortable spaces, Julius Malema and other politricks. I’m not too sure if it’s irony or not, but I’m standing outside a huge white Woordfees tent, while Die Burger reads “Duisende na parlement: Polisie, Cosatu reg vir optog. Motors moet wegbly”. Workers across the country are protesting about labour-broking and toll roads. Seems impolite to bring up Cosatu in conversation. The performance is about to start. We rush in.

The projector in the right-hand corner reads: “NASPERS VERWELKOM ANTJIE KROG, NUNKE KHADIMO, ANDRE LEKOA, STEF PAOLO, GLEN ARENDSE, GARTH ERASMUS, SABELO SAWULO”. The performers are already on stage. Glen Arendse softly speaks through the Khoiboog, while everybody settles down. A half-filled glass rests alongside the mic on the podium. Nunke and Garth stand around on the stage in the honey light. Stefaan, Andre and Sawulo sit comfortably in what appears to be a middle-class lounge, complete with lounge lamp, coffee table, and rug. As far as I can see, besides the guy at the door, me in the audience, and the performers on stage, demographically speaking something isn’t right. After all, more than half of Afrikaans speakers aren’t white. While workers are protesting about labour-broking and toll roads, it seems that this space has toll roads of its own. 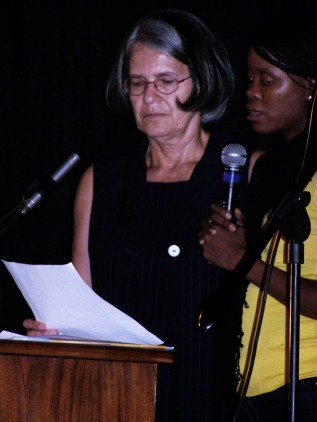 “Naspers Verwelkom...” flickers in the background.

As people settle down, the Khoiboog politely asks for silence. Antjie Krog gently ushers Nunke towards the mic. The performance begins. They share the podium, calling elands in Afrikaans and Kwedam. Clicks, guttural Afrikaans ggg’s and rrr’s entangle with each other. Words and sounds coil and twist in translation. I hear the wind in Antjie Krog’s voice and the steps of the eland in Nunke’s. These stories have travelled far. They are dusty red and stained with blood, their feet calloused from navigating the avenues of vocabularies and the standardised highways of dictionaries. As these tired stories find a temporary refuge in the big white tent, people are taking to the streets in red and yellow. “Nevermind Julius Malema, here come the unions”, the Mail and Guardian reads. 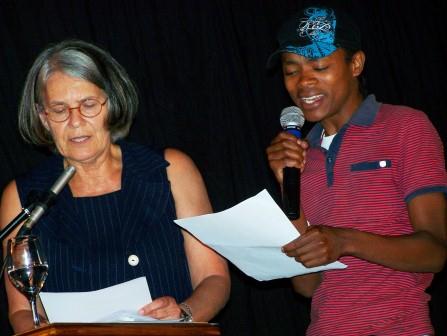 Antjie and Sabelo talk across languages in "Ma" and "Stamaka".

Following in the footsteps of the Eland and the distant drum of social unrest, Sabelo Sawulo calmly takes his place alongside Antjie Krog. Together they perform “Ma” by Antjie and “Stamaka” by Sabelo. An Afrikaans and a Xhosa translation stand alongside one another under the tent of a rainbow nation, but the stage and the audience remain white. My mind drifts, and I think again of the Cosatu marches. While they protest against the implementation of toll roads, I wonder why the tickets to the Woordfees are so expensive. I wonder why well-known artists and Afrikaans poets such as Jitsvinger and Jethro Louw from Afrikaaps aren’t in the programme. Toll roads and gatekeeping begin to seem very similar to me. The protest may be somewhere over there, but the politics are right here as well.

“Naspers Verwelkom...” continues to flicker in the background.

Glen and Garth create the sound of Nunke’s father’s story of stars. Nunke recites the feathers of her father’s story, while Stefaan and Andre translate into !Xun. It is haunting and beautiful. Soft sounds that speak to stars. Stefaan and Andre continue (what seems to me) the cipher, by doing their own piece in !Xun. Children of trackers, telling their journey from Angola. They do hip hop to the beat and rhythm of Khoi instruments. Andre breaks into a stoftrap with shiny, puffy brand-name shoes. This is where swag meets stoftrap. 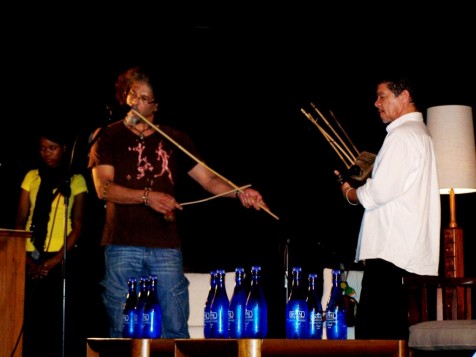 Glen and Garth create the music of the night.

Then Antjie Krog introduces the musicians and their instruments. A mouthbow, a Khoiboog, a Nguluip, one blik met ’n tou wat nat gemaak word, ’n pvc pyp, ’n krapriet, en ’n khoi drom. Glen and Garth make the music of the night, the rain and the animals. Their melodies speak a poetic language that needs no translation. A cricket sings a solo offstage. The music not only speaks to the human audience in their chairs, but also to the ears on the ground and in the trees. They don’t have to pay to listen. Antjie Krog ends off the performance with a beautiful Sepedi love poem. People clap politely. The show is over. We leave the big white tent, pass the make-shift coffee shop. Across Victoria Street, in front of the university’s admin building, I hear people singing struggle songs. I see red t-shirts and yellow placards. Cosatu is striking. I guess these protests aren’t that distant after all – it just seems that way in the islands of exclusivity that people create.