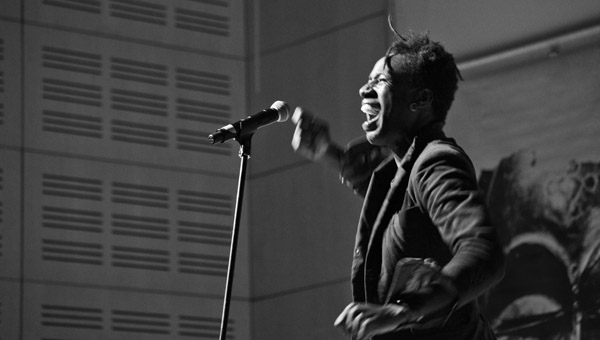 Street lights and stars of the city night. Highway arteries and tar avenues. Folds, creases and faces written into the backdrop of the mountain. It was probably, more than likely, the smooth beats playing on The Dankish that painted the night with the sound of city sighs sheltering from a screaming South Easter. Bending and turning, following the contours of the concrete, signs indicate left to the CTICC. Another left and I pull up in front of glass doors, automatic and revolving, “The Cape Town International Convention Centre”. I take the name too literally, imagining a group of conventions, the socially constructed ones, the scientific ones, the economic ones, the political ones, all suited up with ties, shirts, and shoes that make a noise on marble floors. In reality, there were turbans, dreadlocks, off-cuts and bald spots waiting outside and smoking cigaretts. This must be it, Poetry Africa. 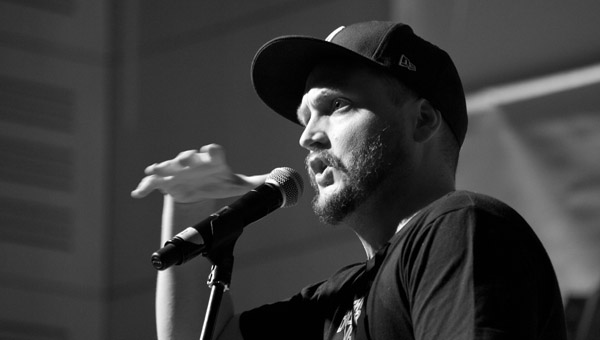 “Celebrating the beauty and power of poetry”, people cleaned up and dressed up. Dashing down through the halls at a polite pace, I got my ticket and took my place. Sitting some rows to the back and in a corner, the evening opened up with Durban spoken word artist Ewok as the MC for the evening. Step by step Ewok guided the attention of the audience with his Durban poison style of “blunt” humour and poetry, warming up the stage for the first performer, Pedro "the Music Man", aka Pedro "the Man", aka Pedro Espi-Sanchis. 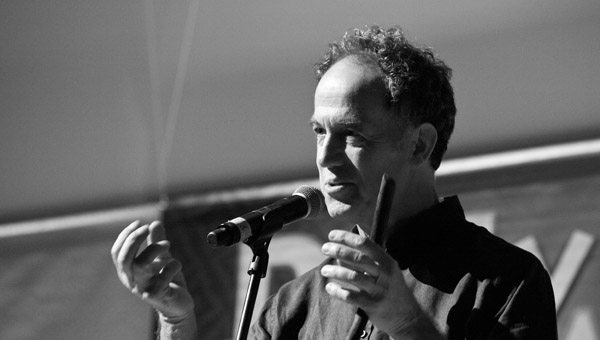 Pedro began by explaining that he makes poetry through sounds which are translated by the listener into words and images. The melody he made transported me. It sounded like my journeys by taxi, the delays of metrorail, a reminder to read Imraan Coovadia’s Taxi Poetry, truck drivers striking, food prices increasing, politics, politricks and poetry somewhere in between. This, all triggered by a piece of kelp that the sea had discarded for the sun to dry out. The empty seat and the stranded instruments alongside Pedro were then taken up by Latozi Mpahleni, aka Madosini, a woman that I’ve only seen snippets of, and one of the reasons that I wanted to come to Poetry Africa. Sawing away at her bow, Madosini produced with each stroke a note that sounded its way into the imaginaton of the audience. Interjecting short poems – described by Pedro as “almost Haikus” – in isiXhosa, Madosini had the Xhosa-speakers in the audience in stitches. Too short, but so sweet, I wish Pedro and Madosini’s set had been longer. With an opening like this by our “living heritage”, the stage and the audience had been loosened up to listen to, as Ewok put it, “traditional poetry”. 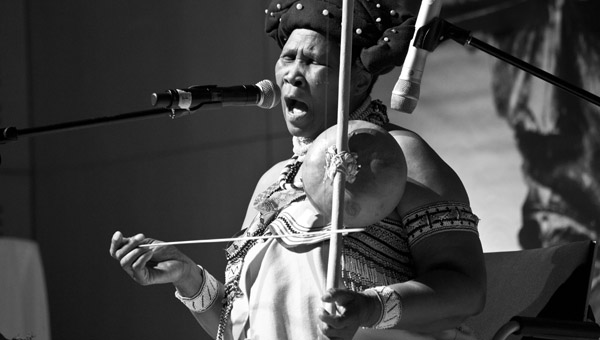 Before introducing the next poet, Ewok launched into a searing rendition of a poem in which he articulates arguments around the “relevance” of poetry:“I said poetry can’t change the world. And I upset them. ”

An interesting but fitting opening for Kenyan poet Philo Ikonya, currently in exile, Ewok’s poem combined with Philo’s personal experiences, weaving together a connection between poetry, power, and the politics of poetic power. Philo opened with a sketch of Thomas Sankara, revolutionary and Pan African theorist: “You can kill a man, but you can’t kill his ideas.” 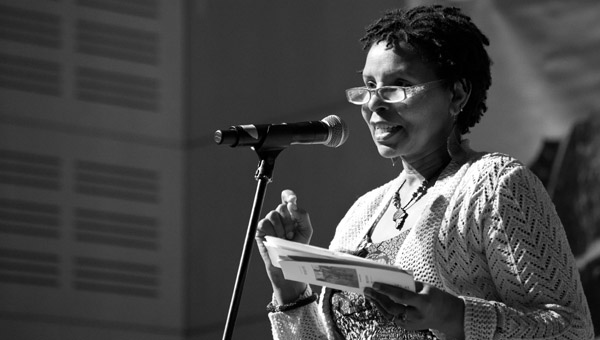 Armed with political word-fare, Philo’s poem “Bread of Peace” kneaded together images of bread-making, change, and the water that makes this possible. She ended her performance with a poem particularly relevant to current South African politics, about the Marikana Miners. She said some things that needed to be said, sometimes reaching a political wail.

Maybe it was the baguette I’d had for supper, the blood flowing to my stomach combining with a nicotine itch, but a break at this point would have been refreshing. Admittedly, I was glad the wailing had stopped. The performances continued, steamrolling ahead. I gripped my pen tighter, holding fast to the concerntration station, enticed by Ewok’s voorsmakie of the next performer, Ghanaian poet, Nii Ayikwei Parkes. Described as not wearing, but rather just nje being hip hop, Nii promised to be that refreshment I was craving. And he was.

“I wish I could walk on water like wood.” 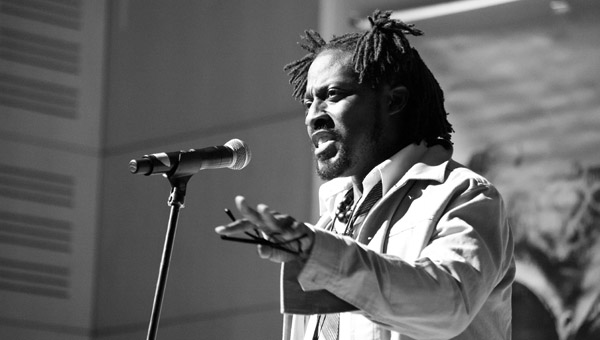 From “Police and Peace” to “Above the World so High”, and ending off with “Mosquito Rules” – a witty paean to the West African mosquito and its role in keeping colonisers at bay – this was a solid, captivating performance. Nii left the stage buzzing. Lebo Mashile then took this buzz to the next level. Opening with some humour about Helen Zille, she had the audience laughing one moment, and in the next commanded a sudden silence:“The body is the physical address for the soul.” 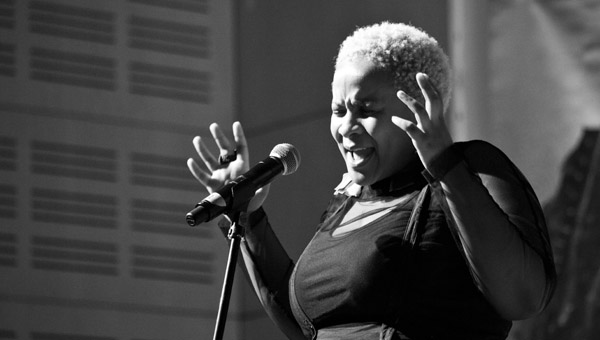 Lebo just killed it! Her performance was definitely my favourite for the night. The content of her poetry haunting, beautiful, subtle; her performance, polished. No Mr Min needed. Touching on and playing with the ideas of the body through the images of skin, Lebo finished off with a poem about names and naming, and the permeation of the past into the present:“Sit with the silences and give them names.”

No wonder they put Lebo before U.S. spoken word guru Saul Williams, because only he could follow in her voetspore. He performed his first poem standing in front of the stage, silhouetted in the spotlights, and projecting his voice all the way to the back of the venue, no mic needed. I guess he had to let the stage cool off after Lebo. I’m not sure how to describe Saul Williams. Or rather, I’m not sure I have the tempo or lyrcisim to capture or describe his style of poetry. Compact. Cosmic. Complicated. Confusing. Entangled. Knotted. Twisting. Winding, grinding, moving, splitting, travelling. Lists. Lyrical, temporal, intellectual, physical, metaphorical. Literal? A forty minute set, and the room had changed into a blank page, Saul Williams the captain in a wilderness of words, his voice the compass. His mic a pen scribbling directions. My advice for future Saul Williams audiences? Come prepared. Don’t try to take notes, and make sure you clean your ears beforehand. 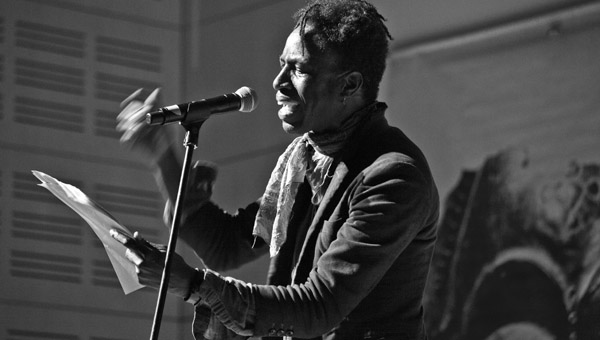 The set shocked and reset all states, forms, nations and norms of convention. This was no joke. For most of us, we walked out feeling untwisted, unlocked, unwrapped from all this packaging. I tell you this review is amazing, but capturing the sensation and intensity can’t even be done by gunning a film. Wow! Will always remember that day.