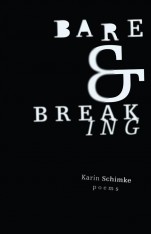 It’s a warm Cape evening, as the setting sun casts coppery rays across the parquet floor in Cape Town’s Book Lounge, making the space all the more intimate and study-like, while guests waft in, treated to the gentle acoustic sounds of 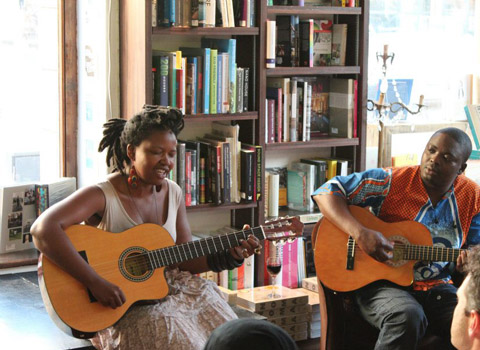 Bienvenue Mambote and his guitar – a perfectly personable setting for the launch of a book. A plethora of metaphors abound when welcoming a body of poetry into printed existence. The descriptors range from the birthing of a child, to the final brushstrokes on a masterpiece. But amid these various analogies, the eminent and sincere voice of the poet herself describes the release of her first anthology as the definitive act of “finishing one’s shit”.

And it is thus that Karin Schimke presents herself to the audience gathered for the launch of “Bare & Breaking”, her debut volume of poetry. Malika Ndlovu, friend and contemporary of Schimke, introduced the poet, describing the event as an “interesting historical intersection” to laud a body of work that “claims the right to pleasure, expressing pleasure”. She prefaces the evening’s proceedings by alerting the audience to the “diverse range of experiences” that Schimke’s work expresses. Following this brief, slightly ungainly, but candid introduction, the petite figure of Schimke takes its place onstage, flanked by mahogany shelves piled high with richly colourful volumes.

Unassuming, affable and humble, Schimke’s presence onstage is complemented by the presence of the friends she has solicited to read her poems with her. As formidable and difficult as it is to make verse written for the page come alive 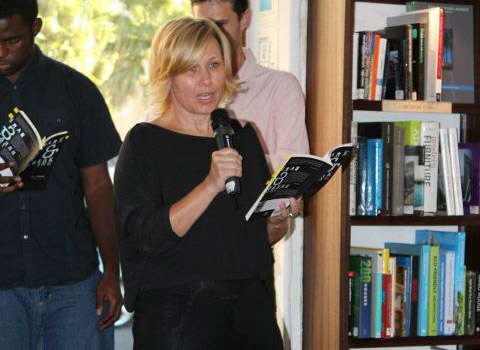 Karin Schimke reading her poems to the audience.

in speech, the performances are elegant and respectful of the form of the poem on the page. Opening with her poem, “Too Much”, Schimke’s voice takes authority over the work and is ever-present in the poems, even when the poet herself stands silent. The onstage ensemble takes it in turns to recite words from the publication. Andries Samuel provides the voice to the “music of Afrikaans” that Schimke employs in some of her poems, while Peter Kawuma, with his staccato and earnest reading, imbues the poems with a harshness, or a sense of violence, and Paul Shangase adds shadow and shape with his deep, sonorous baritone. Almost all of Schimke’s poems are deeply personal and intensely powerful, often taking place inside the body. The somatisation of the emotional experiences in the pieces affords the words a sense of bodily reading, a physicality that is beautifully depicted on Schimke’s pages and is the greatest challenge to those presenting the readings on this evening.

For the reading of “For Two Voices”, Paul Shangase and Malika Ndlovu pair up. Ndlovu transforms the poem’s refrain “I cannot say why this moved me so” into candescent sung verse, her pleasant falsetto wonderfully complemented by Shangase’s low and deep reading. The combination of male and female, treble and bass, narrates the scenes described in the poem: intimate, private scenes of the bedroom. The poem is a glimpse of people in confidential spaces: a woman getting dressed and assessing herself before the mirror; a couple lying entangled. Despite the peering-in of the 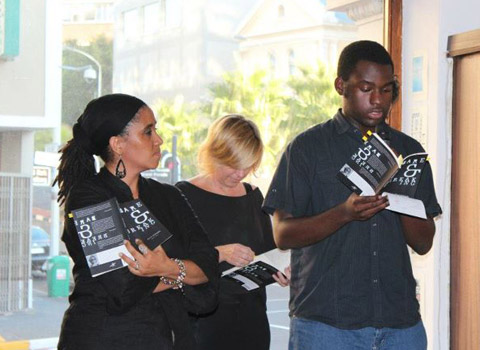 poem, it refrains from becoming voyeuristic, and rather represents a quiet observation. The performance acknowledges the deferential tenderness of the viewer’s gaze, and paints the scenes as the brief sightings that they are written to be.

Schimke’s own readings are heavy with meaning. Her voice, her silences and her very breath are imbued with the text, as opposed to the other way around. Her poem “Crash” is an earnest and ardent exposition of the confusion, fear and ache of depression. The forthright frankness and honesty with which the poem is written, and told by Schimke on the evening, is arresting and sombre. The action of the telling is quintessentially the act of laying bare the process of breaking, incorporating the audience into the speaker’s self as she repeats, “I am disintegrating”.

When she reads “Vertigo”, the pauses before each “no” in the poem’s action are as unexpected and halting as if some exogenous third party were forcefully stopping Schimke. The verses rush towards concluding their descriptions, but Schimke pulls them up short, in the middle of emphatic sentences each time, stopping them with a brusque “No”. And when the poem concludes with the melancholy “She did nothing”, the audience is frozen, open-mouthed, for a moment, before the applause.

The readings incorporate only a small selection from the work, but each one has a resonant and moving underlying story – even in pieces that are playful. The contrasting voices keep the landscape of the poetry almost tangibly topographical, as the audience is lead stumbling through memory and lament, memorialisation and laughter. The different languages that lurk in Schimke’s work, sometimes overt and sometimes latent, are given light and motion in these readings. When Schimke reaches her personal “favourite”, a poem entitled “The Wind at Uilenskraalmond”, it is all the audience can do not to be transported away on the zephyr of remembrance and acknowledgement, to stand wind-whipped with Schimke on a precipice, roused and inspired.

The evening is concluded with resounding applause for the gracious Schimke, who then neatly ties up the event by introducing Thobekile Mbanda. The musician is a delight, a raw talent, sitting perched on the stage’s edge and filling the space with the crooning of her voice, accompanied only by the natural and melodic strumming of her guitar – bare and beautiful sounds, unmediated by technology or amplification. It was a fitting and lyrical close to very successful launch.

Lovely review of a fabulous book of poems.