Wainaina’s endearing head up in the clouds

Posted on August 9, 2012 by Wanjiru Koinange

In the second of three review essays produced by graduate students in a seminar led by Hedley Twidle at UCT, Wanjiru Koinange reads Binyavanga Wainaina’s memoir, One Day I Will Write About this Place, and asks if it manages to avoid all the clichés that Wainaina skewered in his famous essay for Granta, ‘How to Write About Africa’. 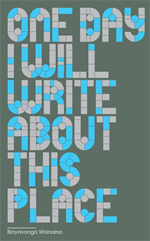 One Day I Will Write About This Place by Binyavanga Wainaina, Graywolf Press, 2011.

Binyavanga Wainaina’s memoir took him six years to write because “the problem with the world is that it just refuses to stop and stay the same and let you finish”. It is with this same gentle humour that Wainaina delivers the story of his world and his weird head-in-the-clouds relationship with it, in his new book.

The only reference to “this place” appears when Wainaina writes about his first trip to his ancestral home, Uganda, and is overwhelmed by the beautiful landscape of Kisoro, where he attends a grand reunion at his maternal grandparents’ home. The book is based largely in Kenya and South Africa with brief sections dedicated to his stays in Ghana, Togo, Nigeria, Sudan, London and the United States.

The memoir begins in 1979. Wainaina, seven years old, lives in Nakuru, Kenya’s fourth-largest town, with his parents and two siblings. Here, we are introduced to a shy Wainaina who only ever seems content when his face is buried behind a book. He envies his sister Ciru – she is faster and cleverer than he is, and the star of their class despite being a year younger than him. His elder brother Jimmy is aloof and bizarre. When his baby sister is born, he is pleased that she will have a sister with a name as strange as his own. Wainaina is sure that he is different – and believes that his strange name, Binyavanga, might be the reason for this.

Although the narrator attempts to show the reader Wainaina’s shortcomings, one is overcome with endearing feelings for him. We marvel at the level of detail his memory is able to capture when he recalls the contents of the garbage bins which were overturned during a squabble at his mother’s hair salon. It is during this squabble that young Wainaina first encounters hostility towards Ugandan refugees living in Kenya and we welcome his attempts to defend his mother. He relates to Moi, the new president, because he is fumbly and unpolished. One identifies with the naïveté that causes him to place all things Western on a pedestal.

Wainaina witnessed some significant moments in the histories of the countries in which he lived. The reader is therefore able to see a completely different side to these moments. In 1978, we get to witness the death of Kenya’s founding father, Mzee Jomo Kenyatta, through the eyes of an eight-year-old whose memory of the event consists of a public holiday and images of Kenyatta’s dead and gray body on a television screen.

The Kenya military coup of 1982 is presented to us by an eleven-year-old as a time of fleeing Indian schoolmates and shootings. Nairobi has corpses everywhere. We see the years around the release and presidency of Mandela manifested by campus parties and celebration when Wainaina was a student in Transkei. He describes Brenda Fassie as the place where sex and struggle meet. Through the narrator’s obsession with her, one gets a glimpse into his life in South Africa. Her failures correspond with his. When she soars, he follows. Brenda Fassie is his South Africa.

One of the things that stand out the most in his book is Wainaina’s use of language and his stable, unwavering tone. As the story develops and the narrator is faced with situations that threaten his status quo, his tone remains even, even while it transports readers to the exact place where the narrator needs them to go. In his review of the book, Ngũgĩ wa Thiong’o describes Wainaina as “a singer and a painter in words”. Wainaina succeeds in finding language where none exists. In the early chapters of the book Wainaina speaks as a child would. His knowledge of words is limited and he is forced to make up words that can describe his feelings and sensations. He invents words such as ki-may to describe a language he cannot speak or a sound he is unable to understand:

Ki- may. This is my new word, my secret. I let my jaw fall slack with the second syllable like a cartoon man with a cash register jaw … I can speak English. I can speak Kiswahili. Ki-may is any language that I cannot speak but hear every day in Nakuru: Ki-kuyu, Ki-kamba, Ki-Ganda, Ki-sii, Ki-Gujarati, Ki-Nyarwanda, (Ki) Ru-fumbira. Ki-May. There are so many, I get dizzy.Ki-may is the accordion, the fiddle, the bagpipe, the trumpet. All those spongy sounds.

Wainaina ensures that the book remains fluid and informal as he describes how he grew up and built a wider language for himself. He does not bandy technical words and phrases around as if to prove his intelligence. Instead, he consistently delivers the story in comfortable prose, reassuring the reader that although he has grown, he is still the lovable and unsure nine-year-old who warmed everyone’s hearts. However, readers who are unfamiliar with Wainaina’s previous works may find his choice of dialect rather troublesome, and may often stumble over some of the words in the text.

One cannot help but feel that the author occasionally reveals too much in this memoir; that he has faced his demons head on. This may cause one to cringe slightly at certain sections of the text. He addresses his encounters with sex and homosexuality with no regard for the stigma that still exists around the latter in many African countries. He airs his opinions on his country and her failing education system, saying “fuck Kenya” as he leaves for South Africa. He is skeptical of his fellow writers because they want to “dig too deep and mess up the clear stepladders to success”. He is afraid of ending up a teacher – which seems to be the fate of African writers. He speaks of his loneliness in the United States not to evoke pity, but to show the consequences that he has to face for “fleeing” his country and being one of those Kenyans who are riddled with guilt for loving their country “from a committed distance”.

Wainaina’s essay, “How to Write about Africa”, published by Granta in 2005, attempted to adjust the mode in which people, writers specifically, depicted Africa in their texts. In the satirical piece he picks out certain stereotypes about Africa. One would expect that Wainaina’s memoir would be completely void of such clichés. It is not. He speaks of the music and rhythm that lives deep in the so-called African Soul when he describes Dombolo, a dance from Congo to which he lost himself while in a bar in eastern Kenya. In fact, it is when he is dancing that the reader feels Wainaina is truly happy for the first time. He describes the breasts of Milka Ole Kamaro as flapping like a flag of victory after he and his workmates encounter her and her group of Maasai women in the middle of a ritual in which, prior to giving birth, the women are released to take over the land and do as they please. The book features a number of episodes where Wainaina is eating and sensually enjoying the meat of goats and sheep. Characters with rheumy eyes are in the book, as is disease when we hear of the prison warder who discovered he had AIDS and then went on to infect inmates before he died. Diabetes runs in his family. Does this then mean that Wainaina has failed to take his own advice? Is it at all possible to tell an African story without mentioning some or all the typical clichés about Africa that Wainaina ridicules in his famous essay? Chimamanda Ngozi Adichie’s theory on “The Danger of a Single Story” comes to mind. In her 2009 talk, Adichie says that “a single story is created when one shows one thing about a people and only one thing”. In the final analysis, Wainaina breaks the trend by showing us other sides to these situations and characters that would otherwise have been victims of the single story.

Wainaina finally begins to come of age as a writer at the age of 28 when he publishes his first piece, “Discovering Home”, in South Africa’s Sunday Times. The Caine Prize committee rejects the piece, but after an irate email from Wainaina, the committee reconsiders its decision and sends Wainaina an invitation to England. He offers this comical rendition of the letter to his readers:

Dear Caine Prize Shortlisted Guy, called Binya…vanga. Do you want to come to England and have dinner in the House of Lords, and do readings, and go to the Bodleian Library for dinner of many courses, with wine, and all of London’s literati? At this dinner, you will find out if Baroness Somebody Important will give you fifteen thousand dollars in cash and even if she doesn’t, you should come because being shortlisted and having dinner at the House of Lords and such is a big deal, a really big deal. So will you come?

A missed opportunity in the book, however, lies in its treatment of the magazine Kwani?, which Wainaina founded shortly after winning the 2002 Caine Prize. The journal has currently grown into one of the most renowned in sub-Saharan African and has drastically changed the literary landscape of Kenya and the region. Kwani?, in my opinion, has succeeded in providing a creative outlet for new and seasoned writers in a way that no other literary or journalistic body has been able to equal. However, Wainaina barely mentions the journal or its impact. While he has the prerogative to speak about what he chooses, the skimpy reference to Kwani? is a slight to the journal, almost as if he is saying, “I didn’t think Kwani? deserves more than a mention”.

Tribalism and its stealthy and swift spread through generations is a great concern to Wainaina. He first encounters tribalism as a teenager when he is denied a place in a good secondary school on the basis of his tribe. On his return home from South Africa, he is shocked to find airport officials openly speaking to him in his mother-tongue because the current president, Kibaki, is one of them. He watches in shock as his peace-loving country is torn apart by an election gone wrong because of his people’s hunger to have their tribe in power. He struggles to understand tribalism.

Wainaina revisits his inability to understand Ki-may in a brief section at the end of the text where he explores benga. Benga is one of Kenya’s oldest genres of music and is still one of the largest genres of local music. According to Wainaina, it draws its origin and popularity from being able to mimic the musical rhythms and verbal sounds of any of the 42 Kenyan languages. As he listens to benga, it dawns on him that Kenyans, from the very beginning, have had a coherent platform on which to carry their diversity and complexities. This platform is benga: the sound of all of Kenya speaking Kenya’s languages. Wainaina’s failure and that of his generation is that benga is Ki-may, an anonymous, tentative sound.

He dedicates the book to his family and speaks of the magic that he and his elder sister Ciru share. Perhaps it is some of this magic that enables him to realise that he, as well as his fellow Kenyans, failed to trust what they knew themselves to be capable of from the very beginning.