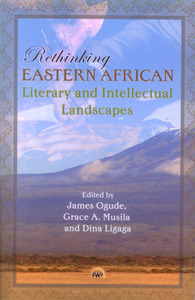 These sections are preceded by an introduction that functions as a roadmap, showing interconnectedness between the individual essays. The introduction also points at the revisionary purpose of the book in re-drawing the boundaries not only of the geography of “Eastern Africa”, but also of the literary and intellectual landscape covered in the book.

This is a deeply engaging collection that moves “beyond the traditional East African countries of Kenya, Uganda and Tanzania to include Somalia, Ethiopia and the Indian Ocean World” (p. vii). It ruminates not only on canonical work but also includes other texts “not easily glimpsed through such canonical lenses” (p. vii).

In the first section, Ogude focuses on beacons that discursively defined Eastern African literature for the first two decades after independence. He coins the neologism “the Nairobi Troika” to refer to Ngugi wa Thiong’o, Taban Lo Liyong’ and Henry Awuor-Anyumba as three key figures who led the decolonisation of curricula in East Africa through their “abolition of the English Department” memo.

The centrality of this key moment and the foundational role of the Troika reverberate in other essays collected here, too. An example in this section is Susan Kiguli’s essay on Ngugi and Okot p’Bitek on the role the writer as both an artist and a critic. The essays’ frequent reference to this act of decolonisation shows that it remains a critical moment in any debate about Eastern African literary tradition.

Tom Odhiambo and Garnette Oluoch-Olunya address the place of the literary magazine in Eastern African literature by tracing its history. Odhiambo engages with 563 Kwani, a Ford Foundation-funded magazine, and its sister series, Kwanini, to probe not only the motivation behind the series but also what it hoped to do “that was different from previous literary and cultural projects”.

Odhiambo concludes that “the magazine has achieved little of its initial objectives and that its stated intentions are undermined by its reliance on donor funding” (p. 24). This conclusion echoes that of Oluoch-Olunya, who writes about Jahazi, “a journal of the arts, culture and performance” which is also funded by the Ford foundation.

The two articles are unanimous on the limit imposed on creativity by agenda-setting funders. Yet the enabling potential of funding is evident in Lynda Gichanda Spencer’s incisive essay on stories published by FEMRITE, “a Uganda-based non-profit making association which encourages a positive portrayal of women by promoting gender sensitive literature” (p. 91).

To me, the book should be applauded by readers because of the critical depth of the articles that form the third section, “The Eastern African Diasporas”, which engages with debates about placing Eastern Africa on a global map of history and modernity. Grace Musila’s essay, which explores the performance of postcolonial whiteness in Kenya, is strikingly original and intellectually stimulating. In this essay her reading “lies in tracing … discursive tropes of postcolonial whiteness in Kenya [and how they] mirror tropes of colonial whiteness”.

Godwin Siundu’s essay reads Neera Kapur-Dromson’s “auto/biography” From Jhelum to Tana as a text that offers an “insider image of the East African Asian community” (p. 247). It is important because it shows “the incompleteness of our understanding of the history of immigrant communities” in the region (p. 261). Maria Olaussen reads Abdirazak Gurnah’s Paradise and Desertion through a frame that centres on migration and dislocation, with the Indian Ocean World both as a point of departure and of arrival. Her article speak to Fiona Moola and Isaac Ndlovu’s articles in the second section of the book, which read the poetic contribution of the East African Swahili coast to the Eastern African literary archive both in Kiswahili and English.

Another strong point in the book is its transcending the high/low binarism in categorising art and culture. By bringing in a whole section (section four) on popular culture, performance and media, the book is able to address genres that are “often marginalised in scholarship” (p. xxi), yet form a significant contribution to the debate on East African literary and intellectual matters.

Essays in this section include Tom Mboya’s reading Okatch Biggy’s Mbenga music to show how it has been used to usurp popular ethnic stereotypes; Maria Suriano’s essay on the change “over time in the relationship between musicians and power in colonial and postcolonial Tanzania” (p. 283) between mid-1950s and mid-2000s; the readings of Dina Ligaga and Fred Mbogo on Kenya’s longest-running radio drama, Radio Theatre, and the longest-running television drama, Vioja Mahakamani, which will be of great interest for those interested in the role of broadcasting institutions in the literary map of East Africa; Dominic Dipio offers a humorous, albeit deeply engaging, essay on the Imbalu circumcision ritual among the Bagisu of Uganda, which he reads as a drama in which “courage, generosity and sense of community” (p. 321) stand out. By tracing the origin of the ritual to a woman, and then showing how the circumcision delivers a man from boyhood, Dipio shows “how the Imbalu ritual serves to draw attention to the gendered nature of the Bagisu and more importunity how the ritual is a dramatisation of how masculine identities are constructed and promoted in the society” (p. xxiii). George Ogola’s essay focuses on cyberspace as a new form of media through which the Kenyan diasporic community symbolically engaged with their Kenyan identity during the violent days that came immediately after the botched 2007 elections.

The book is, however, haunted by two issues: Typos that are hard to ignore as they recur repeatedly, in almost every essay, and the fact of bibliographic incompleteness – a result of some authors citing works that are not reflected in the bibliography, leaving any reader interested in engaging with these works at a loss.

Despite such editing lapses, the book remains an insightful resource for readers of Eastern African literature and its intellectual traditions.

Good review.
I’m a Kenyan poet who occasionaly deals with cultural abandonment and the location of identity.
Come visit.
http://kolembo.wordpress.com