‘Many tongues have I’ 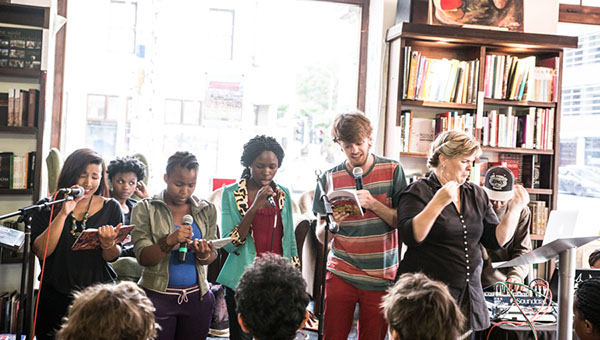 Translation is the great South African unrealised medium. In a country with thirteen official languages and a host of dialects and lingos jostling about off-stage, translation ought to be a bigger field than it is. There is much to be uttered about the roles translation might play in bridging chasms between the various cultures that populate this land. The field is one with exciting potential for collaborative projects that speak to the full sweep of our human experience, rendering the words we know unfamiliar and estranging us from meanings with which we’ve become too comfortable.

It is with this in mind that I arrive at the Book Lounge on a warmly humming Cape summer’s afternoon. A whirlwind addition to the practice of translation, SLiPNet’s Many Tongues poetry anthology is being launched, and the venue is rapidly filling as the appointed hour draws near. I take a seat in the last row of chairs. To my left, a camera streams images to the area downstairs, which has been set up to accommodate the overflow. And overflow it does – the upstairs area boasts a solid mix of younger and older types. I spot the poet Toni Stuart exchanging words with InZync emcee Adrian Different, while Shaun Viljoen, author of a new biography on Richard Rive, Mannini Mokhothu and Ronelda Kampfer are also in attendance. 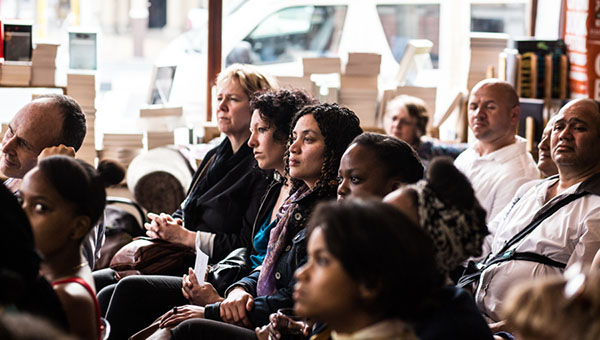 There is, unusually for the Book Lounge, a dj present. He stands over his decks in front of a stage on which three chairs sit positioned for the sort of intimate literary conversation the Book Lounge excels at. Heading up the launch are Pieter Odendaal and Annel Pieterse. It is they who conceptualised Many Tongues and saw it through from beginning to end. Before they take their seats, they line up with three other performers, including a sign-language interpreter. In an intermingling of voices, they read a piece from the collection. 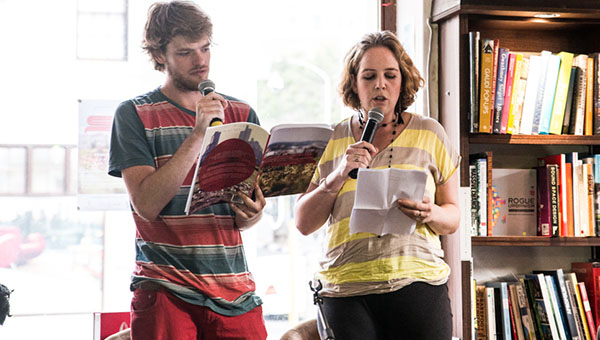 The collection itself is innovative in form as well as content: it was released as an eBook for download, and on each seat in the venue is a pamphlet with a QR code allowing the tech-savvy to download it straight to their devices. For those of a more traditional bent, newly-minted print copies of said collection had arrived minutes before the launch began. They bear upon their glossy front covers a complimentary blurb from no less than Professor Derek Attridge, who declared that

Many Tongues is an exemplary project, showing superbly how translation in a multilingual culture can reveal both the resources within many separate languages and the sometimes unexpected relations among them.

High praise indeed. After the first performance, Pieter and Annel take to the dais, where they are joined by Naledi Yaziyo, a third-year student from Stellenbosch University who takes on the role of interlocutor. She asks them how long it took to get the project running, and Pieter replies that the project sprang from the conceptual question, “How can we create a South African culture if we don't understand each other's languages?” Annel tells us that the project sped along very rapidly from its early beginnings, with each translator being commissioned to submit a chosen poem in their mother tongue, which was then translated into the six different languages. 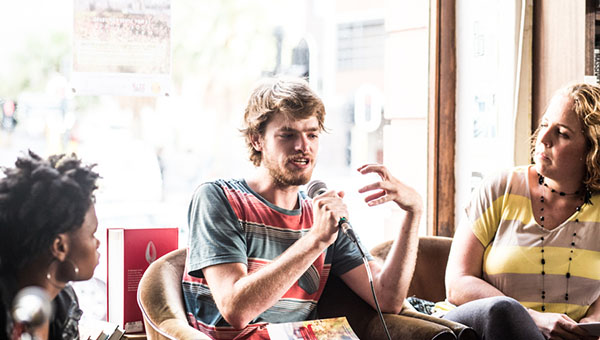 “Translation,” Pieter tells us, “especially from English into indigenous languages is a form of protest.” He describes the process as “a refusal to let the hegemony of English hold sway.” Annel agrees, describing translation as a political engagement with language and meaning. Naledi points to the difficulties engendered in the art of translation, citing one of the poems in the anthology as an example: the Xhosa translator had been unhappy with using a particular obscenity, and vagaries like this mean that each poem, while ostensibly being a re-making of an original, also becomes a new work in and of itself. Annel remarks that “When translating, there are bound to be misunderstandings. These misunderstandings show us the gaps or links between cultures and they form the contact points for intercultural understanding.” 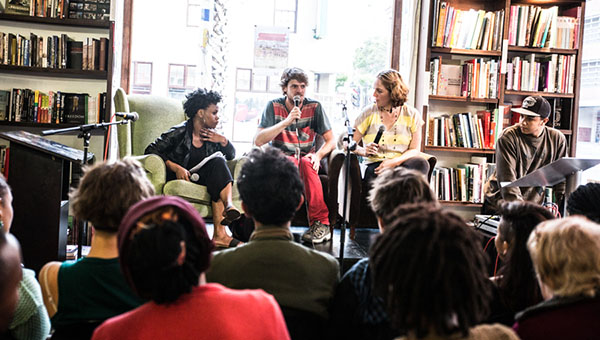 This concept of re-invention is fairly commonplace, but that does not lessen the dynamism of the poems, which vibrate with the revelry of their own tongues. The audience, a multicultural grouping, responds strongly to the poems, especially when Pieter, Palesa Selai, Mambesi Goje (a formidable young poet who has featured several times at the InZync poetry sessions), Liezl Fourie and Kirsty Macleons perform Tlopo Kgubedu (Dark Cloud) in Sotho, Afrikaans, English, Xhosa and SASL. It’s a powerful, resonating poem that fills the Book Lounge and drives home the power of the act of translation. The audience claps appreciatively and snaps up the printed copies on offer before spilling out into the night. 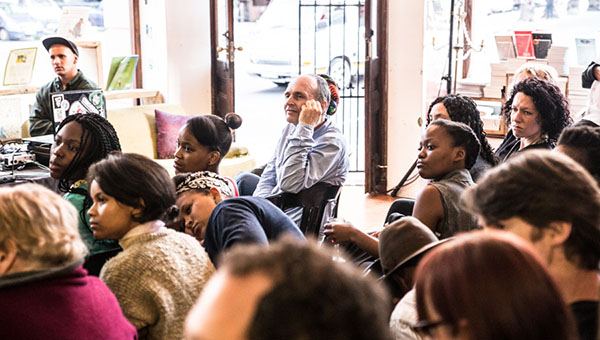 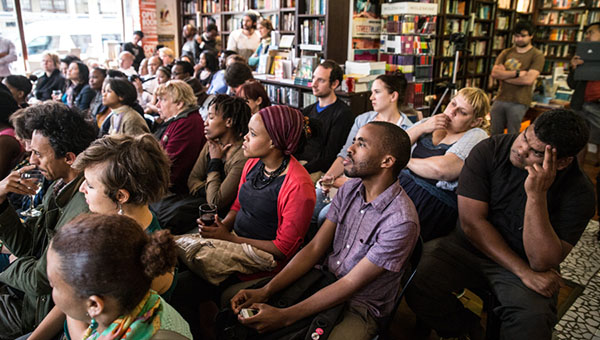 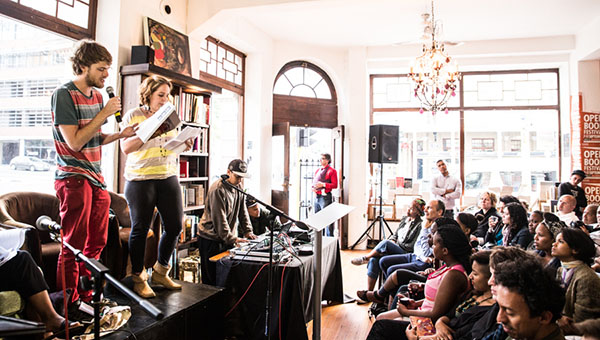 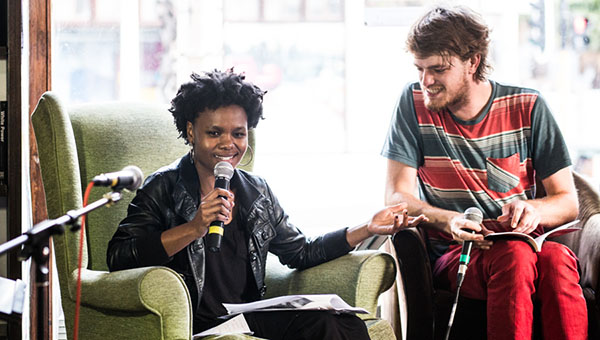 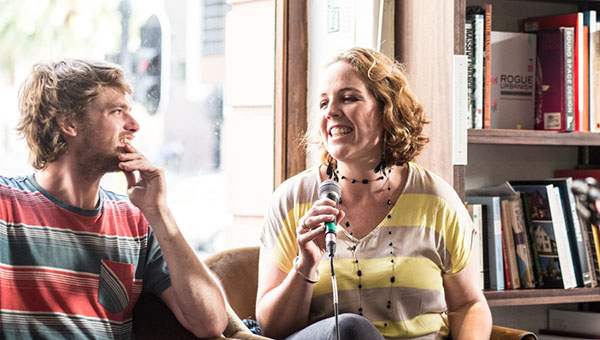 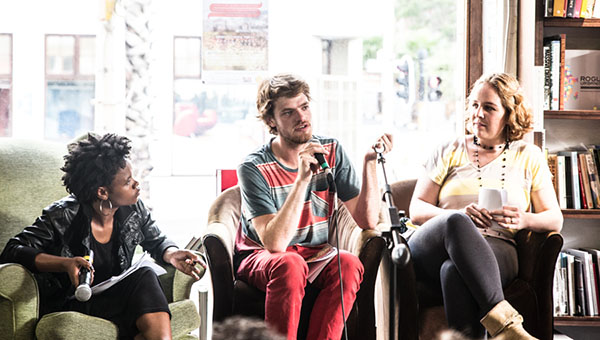 Translation in a time of image-capitalism