A genre for all stories 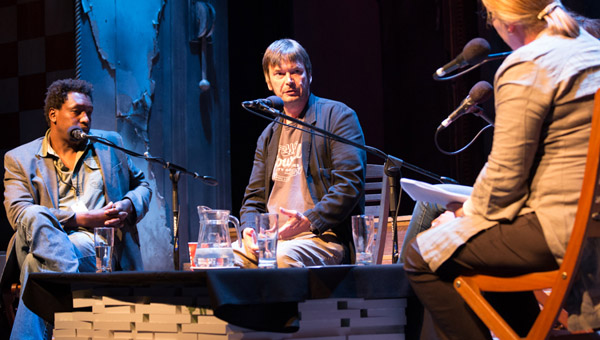 Under the rubric of “crime writers”, Ann Donald leads a wide-ranging discussion with three very different writers that share a passion for storytelling.

While of different ages and nationalities, Makholwa, a PR consultant, is the youngest, lone female crime writer. Wa Ngũgĩ is, of course, the son of legendary Kenyan author Ngũgĩ Wa Thiong’o, a Professor of literature at Cornell University who also writes poetry and is a musician. Rankin, the Scottish king of crime, master of the darker Edinburgh in fiction, needs little introduction.

Laid-back, informed and gregarious, Wa Ngũgĩ delivers a variety of insights into the genre and his own latest novel, Killing Sahara, with bursts of playful humour. He states that he has never known a life but writing, always as an adult riffing off his father as fellow writer, embracing rather than cowering behind his status. He sees his novels as being more questioning and opaque than his politically-motivated essays that have as ends a certain solution to problems like colonialism or civil war, and views his latest work as a crime thriller that explores a central organising question: How can someone that has known and loved someone else for many years decide one day to kill that person? Wa Ngũgĩ states that the crime fiction genre is particularly popular and always relevant, since it simultaneously entertains and allows for socio-political insights to emerge. He feels that virtually any kind of story can be told under the wide rubric, and views the best of the genre as including works such as Crime and Punishment, a highly literate work where crime is employed as philosophical question rather than determining a narrative of detection.

Rankin, in turn, steals the show with his self-deprecating charm and frankness. In his latest novel, Standing in Another Man’s Grave, his beloved Rebus is back from early retirement because of a huge outcry by his fans. Career drinker and fierce lover of the Rolling Stones, Rebus returns to peel back the layers of a Scotland few ever see, one where even the architecture conspires to crime fiction’s mandate of revelation with regards to the urban underbelly lurking beneath the polished tourist veneer. Rankin offers that the state in effect brought Rebus to life by sponsoring Rankin’s studies (he wrote the first Rebus novel, his third ever, while at university), but that they would be hard-pressed to buy him a beer at a local pub. He did receive an award from the state for his contribution to Scottish literature, though. Rankin is attracted to the genre because of its particular ability to conjoin various characters, settings, themes and narrative elements, and writes in his bedroom with a variation of twelve instrumental albums that foster creativity. He believes that Scotland is an interesting place from which to write crime fiction, in part because of the relationship the country has to the British crown, and to its own history (particularly bloody in places) and above all now, since the Scottish people are on the verge of voting for full independence. The audience hang on the man’s every word.

Angela Makholwa more than holds her own with responses candid and thoughtful. Her latest work, The Black Widow Society, deals with a group of women that off their abusive or philandering husbands. Makholwa says that her inspiration was drawn from real life killings of loved ones in SA, and that she wanted to explore the complexities of such a phenomenon. The crime novel has undoubted moralising potential, but Makholwa was also interested in having fun with the story, and creating interesting, layered characters. She is not a fan of investigative crime fiction in general, but is absolutely hooked on crime novels that focus on the psychological aspects of crime and criminology. Her novel resonates in the gendered dimension of its approach, a playful yet serious narrative that immediately grips the reader.

When I ask Rankin in the question and answer session at the end whether there are certain kinds of stories the form simply cannot deal with or represent, he notes that the genre can accommodate virtually any story, but that there are certain kinds of perspectives (for instance that of a paedophile) that he would struggle writing from. The other writers concur, championing the flexibility and scope of their chosen form. Ultimately, these writers seem less interested in cordoning off literary forms than the past year's local debate suggests, and underscore the relevance of crime fiction as socially-conscious entertainment rather than escape from violent reality.