He who makes a beast of himself takes away the pain of being a man, but is it art?

A friend, let’s call her the Moral Compass, wants to give busloads of bergies booze and a ride out to the Karoo for next year’s AfrikaBurn: “By nightfall they will merge with the campers and by midnight they will be indistinguishable from each other.”

Word of mouth led us here. To a transient town of two thousand people camping in the middle of the Tankwa Karoo with their tactical flashlight.  Near a derelict settlement called Lekkerlag, four hours north of Cape Town, and many more south of Gauteng. The road to Calvinia is paved with shale protrusions.  Turn left and follow the trail of shredded rubber.

The landscape is arid, abandoned and breathtaking. 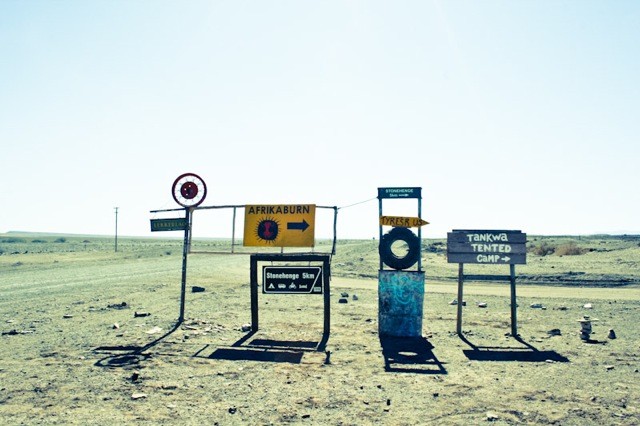 In other words you can buy nothing, sell nothing and leave no trace.

A map of Tankwa Town accompanies the entrance fee. The legend reveals themed camps and the massive public sculptures that are burned on the final night.

As novices, our gift is curiosity.  We veered left towards camping suburbia.

Our companion is a painter and a man of few words. Especially English ones. He reads haltingly, “Based on the Burning Man event in Nevada, AfrikaBurn is more than just a party. We make the world real through actions that open the heart. Our intention is to generate a society that connects each individual to his or her creative powers, to participation in community… en so aan ensovoorts… o, fok.”

If Tankwa Town were Johannesburg, we would be camping in Midrand – with a view to the North and few neighbours. On the opposite perimeter, my youngest brother has pitched his tent in District Nine. In the shade of speakers the size of the doors of perception. I find him walking backwards with eyes akimbo and his mouth migrating towards his left ear, warding off conversation with “not now, not now.”

Tankwa town is all things to all people, but the sand does not distinguish. 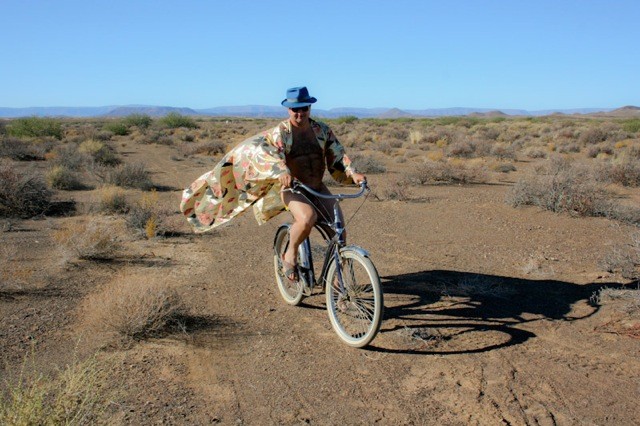 We take a bike ride.  Everyone smiles. I write ‘emotional baggage’ in indelible tippex on an old school suitcase. This is my gift. I offer a notebook to strangers, “Write it down. I will carry your emotional baggage away.”

But that is the extraordinary thing about this place; no one seems to have any emotional baggage. Or they have left it all at home. I get offered mushrooms, French kisses and a ride in a canary yellow aeroplane in stead.

I put my own diary into the suitcase, sufficient unto its purpose.

Children are painting faces. An adult is painting bottoms. Art cars skid past on the soft shoulder of health and safety regulations. Tea is taken around campfires. A wedding unfolds under a silver lotus at sunset.

The mountains flanking the vast, saltbush plane are austere and painterly in the changing light.

We return to Midrand for dinner.

I hear the Moral Compass talking on her satellite phone, “AfrikaBurn would be wonderful if nobody was here.”

Her Husband in need of Chaperoning has invited us round for another meal. A true gourmand, he eats like a condemned prisoner, as if each meal is a last request.

He stands immutable in a gold lamé dress, the seams splitting, while his wife explains, “Sorry no tempura courgette flowers tonight, he is too far gone.”

Instead of cooking, he accuses his sister-in-law of committing adultery with a lone lesbian he wants to befriend. “Where is your husband in all of this gifting?” he asks sanctimoniously. The sister-in-law stuffs some Passover bread into his mouth, “It’s been blessed.”

“But not to worry,” he misquotes Saul Bellow, undeterred by her non-sequitur, “there is no need to be driven away by a little scandal.  A scandal is after all a sort of service to the community.”

We drink wine and eat the sister-in-law’s Passover bread.  The night chill has done nothing to the spirit of respectful congress.  We succumb to the discreet charms of this odd congregation.  In the dark we find ourselves returning to a pulsating cactus to dance.  There are strangers to thank somewhere in the heart of the mandala camp. A field of bioluminescent flowers sway in the southerly evening wind. A high heeled shoe lined in fairy lights is a life sized slide.  A Dromedaris floats across die binnekring, with lit masts and revellers rappelling up its swaying flanks. I want my husband to make love to me in the confession booth. Above us a smoky garland of extinguished stars. We are close to Sutherland, and Sutherland is closest to God.

I dream about Kate Middleton.

At sunrise I wake up and brew coffee, regretful to leave after just one night and sad to miss the conflagration.

Tripping twenty year olds crash giggling into our mess tent. A student in a bee suit disentangles himself from the bikes and points wildly east, towards the rising sun:

“Look up, look up! There is a huge comet! We have been following it all night.”

“For real,” he insists, “people are going to be reading about this. You will see.”

We vow to return.

fantastic, loved the tripping teen pilgrims following a comet. were there 3 of them?

My sentiments exactly. Although far more clairvoyantly put. Lovely! (I would probably have bumped into you there – were I not lost in the blustery winds of perspective)

dis wonderlik, I vow to tag along next time