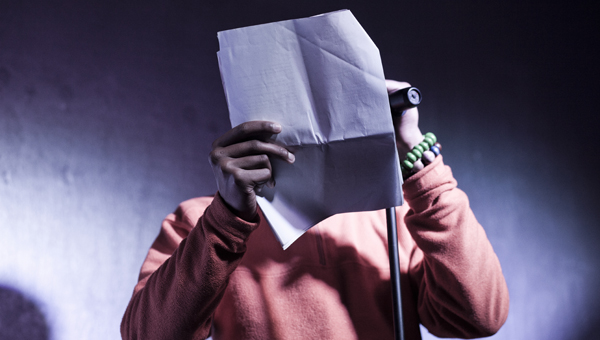 Walls were broken down as if hit by a violent flood at the InZync spring poetry slam. While torrential rain powerfully poured down outside, powerful words poured down inside the Amazink Eatery in Kayamandi. The range, quality, affect and poignancy of the competition participants swept up the willing and spirited audience in a flow that surged, gushed and sometimes trickled into the night.

As the winner of the evening, Derryn Visser agreed that much of what happened on stage was a product of what people felt their fellows needed to hear. Performances boldly and shamelessly approached topics of racism, open-mindedness, inclusivity and cultural identity.

The format of the competition was structured as it always is: in the first round, the speakers had one minute to impress the judges and the audience. The top eight that made it through to the second round had two minutes. In the finals, the five finalists had three minutes to prove their worth. The first round was powerful and varied. It opened with the first contestant, aptly and simply named Stream, stepping up to claim his minute. A performer of excellent worth, despite his unassuming appearance, Stream’s acerbic and candid account of his experiences as someone who is “uneducated” but who “won’t be fooled” was moving and set the tone for the performers that followed him.

The beautiful, delicate and ladylike Caz was the next to take to the stage. Her poem dealt with the difficulties faced in the earliest and darkest hours of the morning. The performers after her ranged from the Afrikaans Raynie with his bright yellow hoodie, wild afro and gently gruff voice; the dynamic Ofentse in bright red with a wit to delight; and the poised and pointed Brown Boy Blue wearing a distinguished hat and speaking of being appreciated; to the sensual Nala with her foreign-tinged accent, who implored the crowd with her belief that if there “were no walls to limit us”, there would be “no reason to want to break free”.

The innocent-looking, wide-eyed Kgotso provided a pleasing list of what he presumes women want men to know. In contrast to him, Derryn took a close and candid look at Stellenbosch University, followed by the equally socially conscious Mr. T and the luminous Allison. Rapper, Coexist, spilled his rap fluidly and solemnly, intently reinforcing the themes that characterised the first round: the need for inclusivity, a breaking down of barriers, and, appropriately, coexistence. The round was closed by Otto, who took to the stage and confronted his Afrikaans identity using the poetic cadences of the language.

“This is poetic purgatory,” host Adrian Different warned at the start of proceedings. “Prepare to be judged!” Stepping into round two, there was no doubt that the performers were brilliantly prepared, and the fearless poets took to the stage again, starting with Mr. T, who exploded old conceptions of slavery and the “primitive mind”. Dressed in a blue hoodie pulled over his head, Mr. T spoke urgently, raptly and earnestly into the microphone, making clear that what is housed in his brain is not a “native mind, but an active mind”.

Derryn continued his poem from the first round, a critique of colonisers, but with a focus on Apartheid leaders and the hypocrisy at Stellenbosch University. “The colours painted on the walls cannot hide their white undercoat,” he stressed, electrifying the already enthusiastic audience who devolved into cheers and whistles. Next, Raynie stepped up, preaching a solution: peace and unity, as “slaves become citizens”, and as the blood that has been shed can fertilise the promised seed into growth. 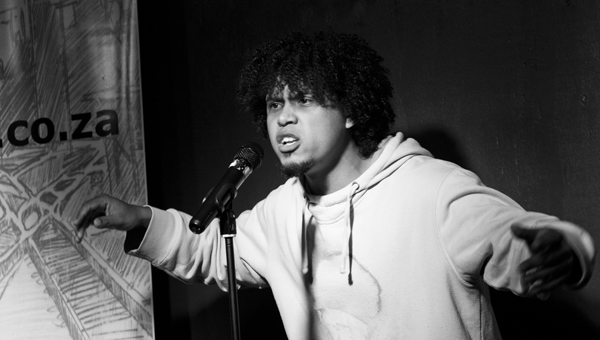 The stunning Allison spoke of embracing her black identity, taking pride in her beauty and impeaching all those who have stood against it, insisting that the bracelets on her wrists are more colourful than so-called “coloured identity”. Two performers later, Brown Boy Blue reiterated this sentiment, insisting, “I am not the bastard child of a country gone wrong,” imploringly implicating the audience in his wide-eyed stare and impassioned words.

Between Allison and Brown Boy Blue were Kgotso and Otto. This time, Kgotso spoke with the wisdom of a naïve but educated teenager, making claims for identity and demonstrating his intelligence. Otto enacted a rejection of cultural superficiality, pointing out flaws and claiming the right to be outspoken. He expressed a different aspect of the pride in heritage that had been communicated to the audience already, firmly and honestly echoing the poets before him. Ofentse finished off the round with his jabs at the listener. He made a satirical critique of broken sexual relationships with his specific brand of whimsical and depraved humour, completely defying taboo and making the crowd both squirm and cheer as he suggested that we “meet in a glove box”. 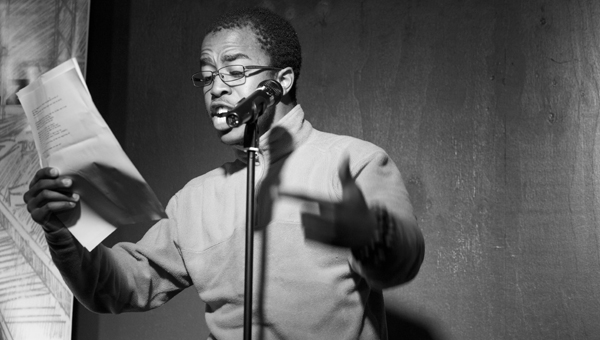 During the intermission, the poets paced anxiously as they mingled with the audience. The DJ played a selection that had the small venue alive with jiving and gyration.

Moving into the top five, Derryn took to the stage first with his final charge against Stellenbosch University – beginning his lament with “Oh, Stellenbosch,” and then running through a list of indictments against the institution with an emotionally loaded and passionate voice. He spoke with the tempo of an auctioneer and the insight of an academic. He expounded on why bureaucracy is a parasite like lice, accusing it of marginalising black students with a perversion of Black Consciousness that brands black students with the ideology of “lucky-to-be-here”. His insistence that it’s time for a revolution and that the desire to diversify has to be apparent in order to truly transform had the crowd in rapturous applause and vocal agreement. His specific blend of sardonicism and intelligence catapulted several members of the audience to their feet in endorsement of his analysis. Smartly and formally dressed, with his hair slicked back and his conservative v-neck sweater contrasting his artful tattoos, Derryn is a striking presence on stage – looking every bit the formal activist, the subversive pedagogue.

Ofentse followed Derryn with a critique of the technocracy. “All is well on the way to hell,” he booms boldly from his deceptively slight frame: “We are all well on our way to wealth”. His poem was tongue-in-cheek and direct, scoring him perfect tens across the board as he cajoled, joked and shocked the crowd into abundant applause. 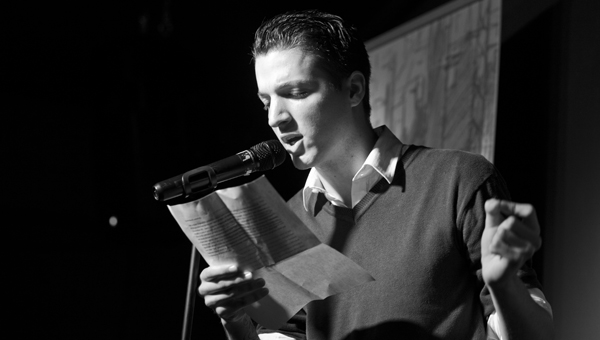 Mr. T lamented the muting of the youth’s voice by politics and strife in his next poem. He discussed the struggles faced by people in South Africa who are dogged by poverty, prejudice and persecution. As he discussed the problematic economic climate and the “Zumocracy”, he identified poetry as the counterpoint for such suffering and demonstrated how it is possible to give voice to a group through the poetic.

Allison began her third set by singing “knowledge is power, the power’s within you,” and with the audience joining in and the room filling with voices, the modest crowd seemed to number in the hundreds. Her next poem pleased her listeners as she asked: “Sister, do you know who you are?” and pointed out to every woman in the crowd that she has the power and freedom to empower not only herself but also future generations. “What’s within you can change the world!” she encouraged, beseeching people to respect themselves and others.

Raynie closed the final round with a poem that read like a letter to a friend. He analysed the differences between peer pressure and “chasing dragons”. He expressed concern for peers who have strayed too widely from the path, asking: “Are you having fun yet?” Without ever sounding judgmental or harsh, Raynie listed his peers’ sins, noting how easy it is to give in to the pressure to conform to the norm, even if it’s damaging, and presenting his “fantasy” as the solution.

When the poets finished, Adrian Different stepped up before the elated and raw-throated audience to announce the winners. Third place was awarded to Ofentse, who performed a poem titled “Sons of Sabbath, A New Science”, his eyebrows raised in conviction, his face an expression of horrified bemusement. The expressions on the faces of the audience all shared their repugnance at his subject matter – the sexual abuse of young boys by Catholic priests – but when he finished, the overwhelming applause proved his right to the prize.

Second place seemed a fitting position for Raynie, who was given a second chance by the generous crowd after he hit a blank in the first round. In fact, his win illustrates the egalitarian, encouraging and forgiving nature of the InZync community, a community that supports its members and judges generously and mercifully.

Equally fitting is the first place that was awarded to first-time poet, Derryn Visser. He humbly and gratefully accepted his title as slam champ, his victory proving that the young generation of poets, academics and students are ready for a campus revolution.

As always, the InZync poetry slam was a powerful and inspiring event, laden with emotion and fervor. Perhaps the rain was necessary – otherwise the zeal may have burned the house down. 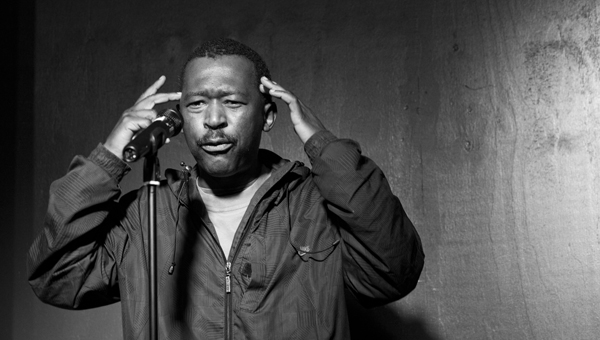 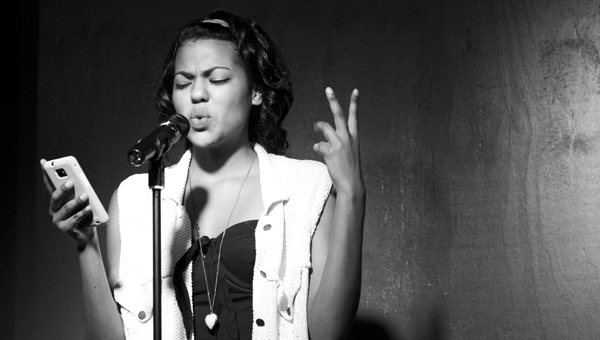 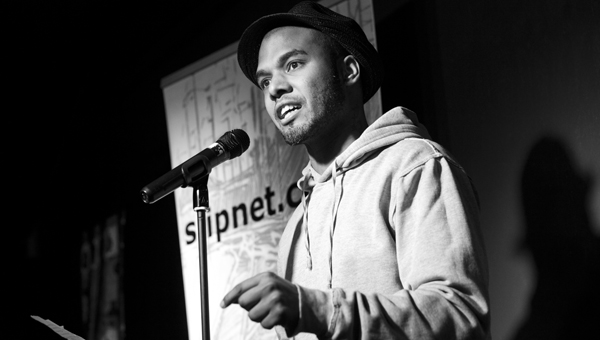 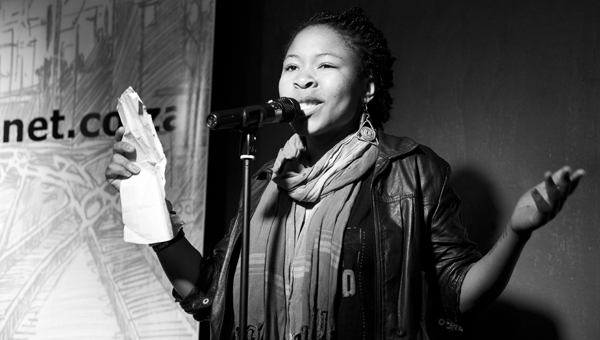 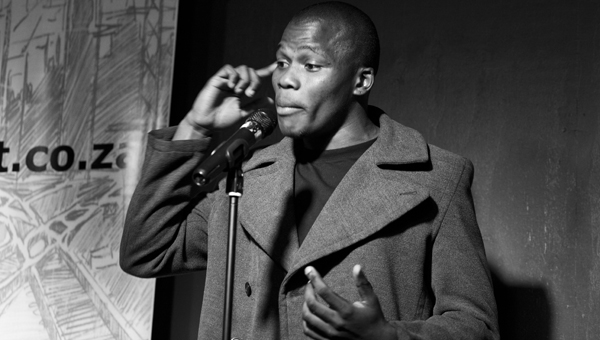 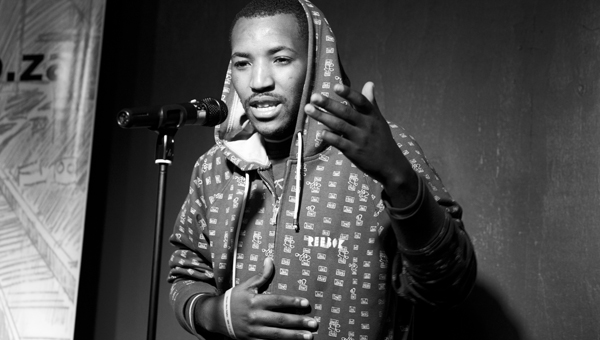 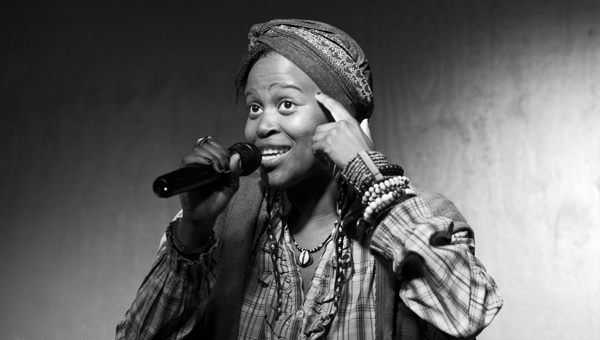 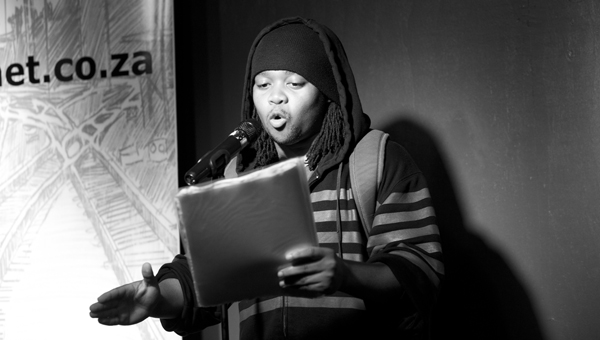 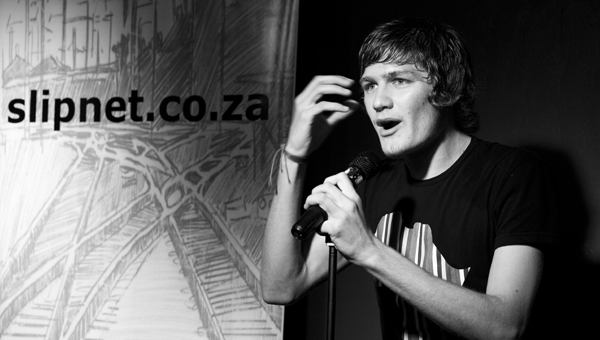 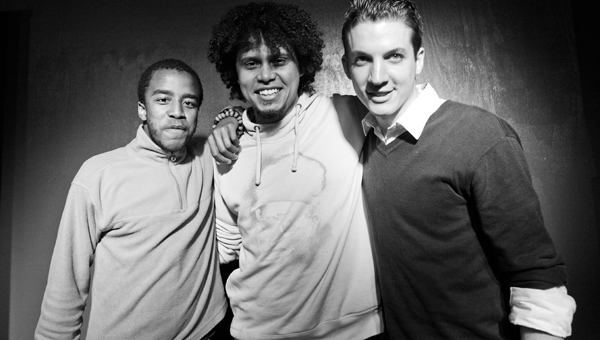