For the Love of Short Stories, 21 September 2012, Fugard Studio 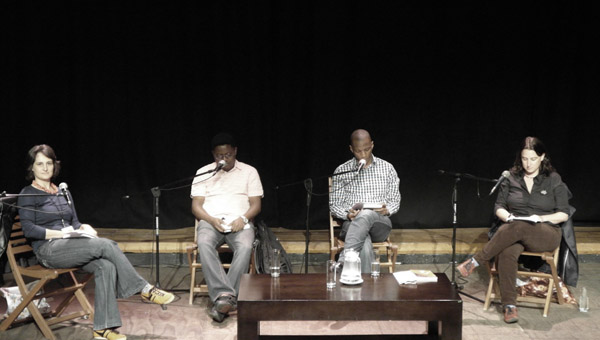 If metered time – minutes, hours and days – were in some way correlative to literary form, an hour, the length of this panel, would probably suggest the short story. But this session, which included three brief readings by Henrietta Rose-Innes, Siphiwo Mahala and Rotimi Babatunde, followed by a series of good-humoured but probing questions from the chair, novelist and short story writer Diane Awerbuck, possessed the expansive time of a novella, at least.

Where Siphiwo Mahala, author of the collection African Delights (2011) imagined his ideal reader and spoke of the unexpected afterlife of a written text, Rotimi Babatunde, winner of the 2012 Caine Prize for African Writing, offered his thoughts on humour as a counterbalance to trauma. Babatunde, a writer and playwright based in Nigeria, also briefly digressed on the unavoidable issue of nationalism and nationhood.

“The individual for me is key and does not function as a cipher or metaphor of the nation,” said Babatunde, whose prize-winning story, “Bombay’s Republic”, tells the story of Colour Sergeant Bombay, a Nigerian war veteran “who went off with the recruitment officers to Hitler’s War as a man and came back a spotted leopard”.

As is often the case with panel discussions, things only loosen up late and gain clarity near the end. Late into this session, Rose-Innes, who is currently shortlisted for the 2012 BBC International Short Story Award, responded to a question from the audience about the difference between the short story and novel.

“Short stories,” ventured Rose-Innes, “are much easier to conceptualise than big plot-driven novels.” She stated that she is attracted to the short form because of its intensity, the “absorbing flashes of sensation” it is able to hold and communicate. A past winner of the HSBC/South African PEN Award, for her short story “Poison”, Rose-Innes however admitted that she is teaching herself to enjoy the “loping rhythm of a longer story”.

Mahala, who followed Rose-Innes in reading a short extract at the beginning, has a fine ear for fast-paced dialogue. His reading allowed listeners to eavesdrop on an animated exchange between a Sophiatown wedded couple. At issue is the husband’s occupation: he is a thief. “I would refer to someone of my vocation as a reclaimer,” he objects. The story, part of a historical arc that moves from the 1950s to present, respectfully acknowledge the legacy of Can Themba’s short fiction, “The Suit”, published 49 years ago in The Classic.

Before his reading, Mahala, who is deputy director of books and publishing at the Department of Arts and Culture, introduced himself with a humorous story. While still a schoolboy, he travelled from his native Grahamstown to Fort Beaufort on a school outing; upon returning, he realised he was the only boy who hadn’t secured the postal address of a girl. He contrived a solution: a week later he wrote himself a fictitious lover’s letter. Mahala’s anecdote later prompted Awerbuck to ask the three writers if the short story presented a way of writing a letter to oneself.

An astute, always likeable public speaker, Rose-Innes obliquely responded to the prompt, stating that, if anything, the form offered “a way of structuring experience, of clarifying a process of experience which is not quite clear”. Mahala was more direct: “The writing I do is the writing I would like to read.” Which in turn prompted Awerbuck to ask Mahala who his ideal reader was. He mulled on this, saying he wasn’t sure, then, comically, but also necessarily, offered: “Me.” A writer who doesn’t write to please himself is simply a copywriter.

In a session punctuated by occasional bouts of laughter, comedy formed the subject of a direct question from the chair. “Is it okay to use humour to speak about something dramatic or traumatic,” asked Awerbuck, whose 2011 short story collection, Cabin Fever, injected humour into her sometimes bleak narratives.

“For a lot of Nigerians humour is a way of coping with harsh realities,” responded Babatunde, whose highlighted story tells how Bombay, upon returning to Nigeria, installs himself in an old jail, and – Fela Kuti-style – declares it to be an independent republic, much to the indignation of visiting taxmen. (“Did you collect the necessary visas?” Bombay presses them when they enter his home for an audit.)

For Rose-Innes the decision to deploy comedy in her writing was less a conscious one than of “relaxing into a technique, a South African way of being that, from force of circumstance, has to view things from a darkly comic position to get by”. She smilingly held up Katya Grubbs, owner of Painless Pest Relocations and the central protagonist of her 2011 novel Nineveh, as a kind of model of comic possibility in her rapidly growing fictional universe.

The session was not without critical reflection. Mahala, responding to Rose Innes’s admission that she wrote “Sanctuary” specifically for the BBC-sponsored short story award, ventured an open-ended thought on the “danger” of writing for competitions as opposed to simply “exploring the craft”. Taking her cue from this statement, Rose-Innes noted how South African short story writers “keep reproducing culturally imported forms”. Short stories now, she added, are the same length and form they were 50 years ago, when Themba published his psychological anatomy of crime and punishment.

The future was also briefly touched on. Notwithstanding experiments with short form, including Nigerian-American author Teju Cole’s fait divers – literally, brief news stories - uploaded to his Twitter account from Lagos, Rose-Innes said she was “not entirely convinced” that the short story form was “flexible” enough to migrate digitally. The observation didn’t prompt any reflective pause among the festival’s many typists, their faces bottom-lit by glowing electronic devices, as they uploaded digital echoes from the ephemeral real world.