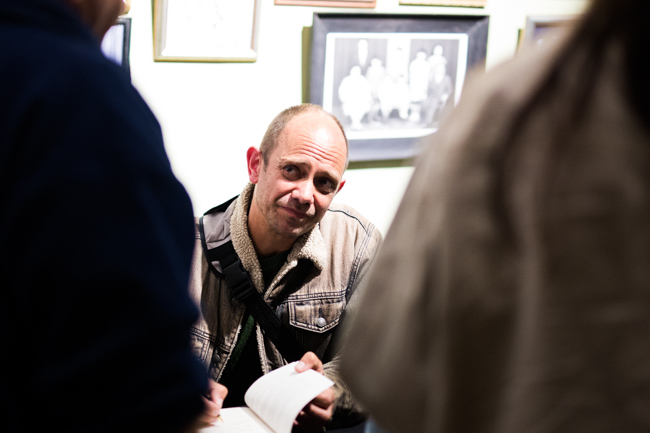 I often wonder what it is that makes some writers good and other ones great. What that ethereal quality is that makes some literature/s stand out. Deleuze and Guattari call it a ‘stuttering’ – that which bifurcates; that which leaves other literature/s diminished by its existence. It’s hard to describe, but all avid readers know what it feels like when a novel makes you sit up, makes you read late into the night, makes you wonder why you ever read anything else. Damon Galgut is such a writer for me. His works aren’t flashy, catchy; in fact, for me they’re often the opposite – they make me uncomfortable, uneasy, but in a way that makes me keep reading. So I was happy to learn I’d be interviewing him at this year’s Open Book Festival.

Foster was probably the most repressed man that ever lived. And though it was a different time, he was somehow surrounded by other gay men who found a way to live openly as gay men. But he was timid sexually. I think it had a lot to do with his relationship with his mother. Yet at the same time it was precisely his timidity which gave way to his writing. It was his need for love which led to the creation of Passage to India.

At the launch of Arctic Summer I heard you say that writing this book was a very personal experience in that you share certain things with Foster. Would you mind elaborating on this?

I always tell students who want to write not to read anyone with too strong a voice because it inevitably influences your writing. But in the case of Arctic Summer, it actually helped my writing because he became a voice in my head; a way of writing and perceiving. And we share a love of India. That was important for me – to concentrate on the things we share rather than the things we don’t.

Place – I mean setting, milieu – seems very important in your novels. It seems more than merely contextual; almost as if it is a separate character.

Yes, that’s accurate. I can’t write until I know the setting. I also don’t write much about cities; they don’t speak to me in the same way. But the setting is important; it evokes a presence for me.

One of the things I like about your novels is the way in which they stretch time; I mean you take your time to say things, which I find so the opposite of many things in life today. Can you say something about this?

Most novels are constructed around an event – something happens. I’m more interested in what happens when decisive action is not taken, because that also sets events into motion. But it does suspend a moment, which then stretches time.

Many writers have thought about memory and what it does. And you also explore this in In a strange room. What intrigued me especially is the way memory takes place between Damon and Reiner; how it shapes them both, and how at times one is suddenly aware of the observer.

I wanted to write something about remembrance – how it takes you back in a moment, how you can be detached in that moment but also zoom in on it. And how what you do then becomes strange. I have a voice in my head that often does that to me; makes my everyday habits seem odd. So I wanted to express that in the novel.

Who do you read when you have time?

Your novels seem to me often to be about authenticity – even from your very early novels. Is this accurate? What makes it such an important theme for you?

Small talk consists of a lot of bullshit. A lot of conversation between people is nonsense. So the moments of real connection takes on a meaning beyond that which is talked about. I am interested in that.

What do you think humans can do without?

Cellphones. TV. Meat. So many things. This list won’t make me popular. But I guess people like to be comfortable.