Jazz, the human condition and the ongoing moment 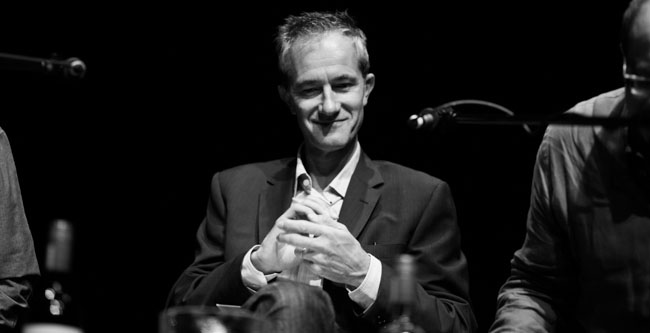 Geoff Dyer, like his mentor John Berger, writes about almost anything and everything that piques his interest. Funny and cocky between the pages, I was rather surprised to find him a sweet, thoughtful human being. (My judgement was clouded by my experience of Ian Rankin last year, no doubt!) Geoff is originally from the UK, has travelled and lived in a number of places, and now resides in Venice Beach, California. He has written four novels, a critical study of John Berger, two collections of essays and six other genre-bending books. His work has been awarded numerous times and his most recent publication is titled Another great day at sea: life aboard the USS George H W Bush. I chatted with him at the Open Book Festival to find out a bit more about the man with the many hats.

I read somewhere that someone described you as “eager to live, wary of writing”. What is it about living and being in the world – in this current world that fascinates you?

I am a writer who bases a lot of what I write on my experiences, rather than my imagination. So it’s important for me to live and be in the world – to gather experiences – because that enables my writing.

In 'Capitalist realism', Mark Fischer describes the effects of capitalism as the failure to be surprised. This seems to me quite close to your ideas of boredom (what you call “instant boredom” – the idea that we have so much choice, but the irony that most people exercise that power as consumers – that something about that makes life dull. Is that part of your fascination with boredom? And the human condition in general?

Well I guess I’m always looking to counter that boredom; I’m always looking for surprises and creating situations which lend themselves to novel encounters. I also like to be surprised as a reader and I guess for me the novel as a form – even experimental novels – have lost the ability to surprise. For me writing is about experimenting. But then I guess that’s what many people dislike about my writing.

It’s been almost 30 years since the publication of  'Ways of telling', your book on John Berger. What do you think of him these days?

John Berger is quite old now but he was the first famous writer that I met. And he was a kind of mentor for me. I mean he certainly shaped the way I write and think about the world in many ways. John has since become a friend and I am happy to say that my admiration for him is undiminished. He’s a great man and a great writer.

Something I love about your books is the way you describe – there’s an objective detachment but also a subjective insertion. It makes me think of the line at the end of  'Death in Varanasi' when the narrator says: “I didn’t renounce the world; I just became gradually less interested in certain aspects of it, less involved with it.” Do you feel this way as you get older?

I’m not one for renunciation, to be honest. But I do feel that there is so much on sale these days, so much on offer that one doesn’t need. But I don’t feel the need to renounce it; I just don’t need it. Of course one can’t get away with as much as you get older either. I mean one can certainly indulge, but recovery definitely takes longer. Certain things change; I am less involved in certain aspects, yes, but not as a renunciation for any ascetic reasons.

I read your article on DeLillo and Booker Prize. Do you think he’s an important writer?

I certainly think he should have gotten the Booker Prize once or twice. And yes, he’s an important writer, even though I don’t think all of his books are successful necessarily. And there are many other more important writers. But I think he gets something about the metropolis that was ahead of his time and of his peers.

I want to ask you about 'Zona'; your book on the movie “Stalker”. I hadn’t seen the movie before I read 'Zona' and of course it made me go out and get it. The funny thing is that I hadn’t heard your voice when I watched the movie so I heard comments from this book being narrated in my head in Werner Herzog’s voice! But what I really want to know is what you think about cinema and the cinematic experience these days?

That’s not a bad voice to hear in your head! Perhaps I should ask Werner to do the audio book… But about cinema, it feels to me these days that most movies are pitched at the level of 16-year-olds. And there are many Indie movies of course, but I don’t think they are interesting from a cinematic point of view. Stalker is not only a great movie; it’s really a great artwork. And that’s a rare experience. I recently watched Borgman and certainly I was aware of being in the presence of greatness then, so these moments do still happen.

I like the idea of you not having seen all your homes yet (as you write in 'Yoga for people who can’t be bothered to do it'). Are there any places in particular where you would like to live that you haven’t?

To tell you the truth, living in California has always been an ambition of mine. I wanted to live in San Francisco. I don’t live there but I live in Los Angeles and I’m also more centred now than I was when I was younger, so I feel less of an urge to move. I am happy living where I am now.