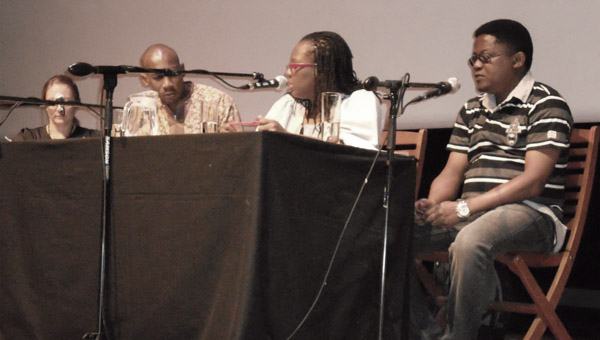 This event was a conversation between Ifeanyi Ajaegbo, author of Sarah House (a novel about present-day slavery and human trafficking) and two fellow Nigerian writers – Rotimi Babatunde, winner of the 2012 Caine Prize, and Lola Shoneyin, a poet, novelist, and author of children’s books.

In the conversation, the writers stressed that they wrote about issues pertinent in their societies, for instance polygamy, authoritarianism, and human trafficking.

Asked about how their residence outside Nigeria affects their writing, Rotimi observed that “a writer carries his or her world in their heads” to underscore the fact that even when writing in a locale physically outside Nigeria, somehow the connection with the country remains in his psychic life. For her part, Shoneyin revealed that she never felt disconnected with Nigeria when she was living in the United Kingdom and that she had remained in touch with her childhood memories and with relatives and friends, some of whom she had telephoned when writing her novel, The Secret Lives of Baba Segi's Wives, whenever she needed to clarify something.

A member of the audience asked if Rotimi wrote the short story “Bombay's Republic” to win the Caine Prize or if he won it because he had written the story. The administrator of the Caine Prize, Dr Lizzy Attree, described this question as a long-standing one. Rotimi said that his style had evolved over the years, so he certainly had not written the story to win the award. “I am quite dull, so it took me ten years to write the way I do now,” he confessed, sending the audience roaring with laughter.

On whether the writers don't find it challenging to write in their second language, English, both Rotimi and Shoneyin answered in the negative. “We are a multilingual people,” Rotimi said. “We speak African languages and English.” As for Shoneyin, she said she is comfortable working with both Yoruba and English. “I use English for practical reasons – to reach Nigeria's 293 language groups and the rest of the English-speaking world.” She added, “I make English do for me what I want it to do for me”, bringing to mind Chinua Achebe's oft-quoted statement he made at the 1962 conference held at Makerere University, Uganda: “I have been given the language and I intend to use it.”

The event was a highly entertaining and edifying one, what with Ajaegbo’s probing questions which seemed to put the writers on the spot, Shoneyin's feminist stance against polygamy, and Rotimi's soft-spoken but convincing responses to questions directed to him.