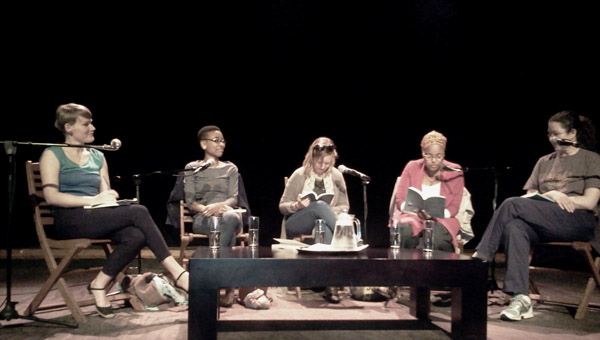 This was my first time at the Open Book Festival, and what better way to begin exploring the sea of events than with the launch of an anthology celebrating women’s firsts?

The launch of My First Time, edited by Jen Thorpe, promised to be an event during which the word “vagina” would be mentioned as many times as possible. And so it was. Two years ago, Thorpe, a feminist writer and researcher, sent out a series of emails to friends and colleagues in which she asked them to write down their stories of first-time experiences. The response to this call was tremendous. She received over 80 stories in less than two weeks and she realised she could not keep these stories to herself. And so the blog, “My First Time”, came into being. It has culminated in an anthology that celebrates more than 200 stories from women who were keen - and bold - enough to share experiences they would typically only tell after a few glasses of wine, and with a close friend or two, to boot.

Zinzi Voyiya was the first to read. With poise and grace, she told a story entitled “My First Experience of Sexual Assault”, noting that the last time she told this story was in a courtroom. The audience, unsure whether they should applaud or hug her, were stunned into silence by the end of her reading. But the women on the panel were rightly unashamed about their stories. They chose to share their experiences so as to break the silence that typically envelops sexual assault. Silences like the one that filled the Fugard Studio at that moment.

Sarah Bitten, who was grateful her mother was not in the audience, offered what she called a gynaecological guide to life, with a story that explored the first time she discovered sex. Bitten also spoke about the need to take women’s stories of sexual experiences out of the realm of sexual abuse and violence. It is important to tell stories of sex not only from a negative point of view, but also to tell good and nostalgic stories relating to womanhood, a goal she hoped her contribution to the anthology would achieve.

Athambile Masola and Nicolette Pombo then proceeded to share their pieces, both of which dwelt on the ambiguity of sexual relations for adolescent girls. This opened up a conversation about the lack of sex education both in the home and at school, and the failure of mother figures to educate their daughters about all things sexual.

“But why does the responsibility of sex education rest solely and fully on the mother figure?” an audience member asked, leading the panel to the realisation that the distortions around sexual relations are as bad for men as they are for women. Perhaps a male edition of My First Time is the first step to fixing this situation?

My First Time underwent a distinctive transition from blog to book, an achievement Thorpe attributes to Colleen Higgs, owner and publisher of Modjaji Books, and to the powerful nature of women’s stories. It might have been more mainstream to put out a call for submissions of women’s stories and proceed to seek out a publisher, as is the norm. But when one reads the stories in this collection, it is clear that such a process would never have worked for a project so “stripped down” in nature as My First Time.

The posts made to the blog were all anonymous. This not only creates an authentic space in which the writer can share experiences, but also makes the reader feel unworthy of entering this sacred story space, and grateful that they had been invited to do so. Could this be the start of a new publishing strategy?