Your gender performativity is ruining my day 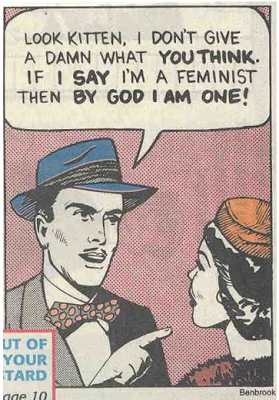 I’m in the company of a fellow philosopher, and he’s carefully explaining to me that Plato is really somewhat of a feminist, you see, because in the Republic book V he advocates equal education for men and women, and have I read the Republic, because I really should, because if I read it I’ll see how Plato allows women into the guardian class and how progressive he really is. He’s barely giving me a chance to speak at all, and when he does, he cuts me off two sentences in to tell me that the feminists who criticise Plato’s women are just too radical and can’t be taken seriously.

Let me introduce you to my friend, my father, my brother, every lover I’ve ever had: the Mansplainer.

You’ve known the Mansplainer. Chances are you know them right now. You might even be them. Who is the Mansplainer? The Mansplainer is that person who assumes that they know more than you about a subject and will proceed to explain this subject to you in an infantilising and patronising fashion. They will take forever to wrap that shit up, because they really need to make sure that you get it. Their confidence in their superior knowledge is rooted in an unconscious bias, often (but not always) based on your gender. They are often male, and you are a female, who simply by virtue of being female is less knowledgeable, even in your field of expertise. Sometimes they are white and you are black. Sometimes they are old and you are young. Sometimes they are a Molotov cocktail of all aforementioned things, and boy, are you fucked then.

Now, if I were you, I’d be hesitant to go around accusing people of mansplaining next time you’re watching football with your friendsand the Mansplainer feels the need to explain “offside” to you. Take it from someone who has tried this before, it will end badly. Mansplaining is not a friendly term, and men in particular do not take kindly to it, even if you take the time to mansplain that women too can be mansplainers, just like women too are part of “mankind”. Men have a way of co-opting our language, so we’ve done them a solid and given them this word too.

The usefulness of the term is a hot topic, and feminists can’t quite agree on whether it will be of any real value in the long run. But we all agree that patriarchy is a problem, and that it needs to be shaken up. We all have stories of men condescending to us. We know that they do this because they are reinforcing gender hierarchies, knowingly or not. And yet somehow our language has, until the coinage of this portmanteau, been absolutely, absurdly, incomprehensibly incapable of succinctly capturing this experience. We needed this word. Our 140-character self-portraits needed it. And in South Africa, we could really use it right about now.

The Mansplainer lurks and likes to pipe up when you least expect it. They thrive in the anonymity of the internet – especially by co-opting your Twitter mentions – and in the comments section of every website ever.