The woman and those who stand with her 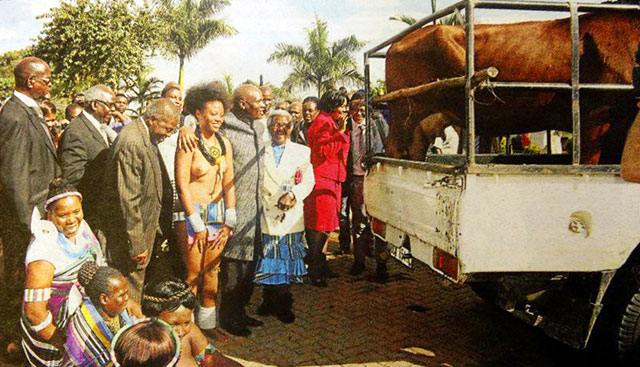 It has been more than a week since Hlaudi Motsoeneng received a wife as a “gift”. It is not only the simple fact that a woman was given to the SABC Chief Operations Officer as a gift – reprehensible as that is – but also the way in which this event allegedly took place that’s cause for concern. According to Mudzi wa Vhurereli ha Vhavenda executive secretary Humbelani Nemakonde, ten girls were chosen as possible gifts and they were then “paraded” (his word!) for Motsoeneng to choose from. He followed up that statement by saying that the entire issue was blown out of proportion and that a new statement will be released. The second statement, released earlier this week, claims that no wife was in fact offered to Motsoeneng. Apparently there were only four women involved in the event, and they were simply playing a ceremonial part. Wives, they say, are only given to chiefs. Oh, okay then. Whether or not this is the truth is hard to discern, and Motsoeneng himself has yet to say his say. He was, however, quoted in the original report as saying in Sesotho “they gave me a wife” and it is hard to see how he could have misread the situation so badly. That the original reports also say that the girls’ parents knew what was happening lends the wife-gift interpretation a slight air of credence, which this latest statement cannot quite seem to shake off.

Meanwhile, we are still waiting for the ANC Women’s League to speak up about this issue, on which thus far their silence has become disappointing evidence of consent. Vhavenda King Khosikhulu Mphephu Ramabulana has made his statement, saying that wife-gifting is not a part of the Vhavenda culture and that it is completely against tradition “for a woman to be treated in such degrading [sic] manner”. Some unknown party has also lodged a complaint at the SA Commission for Gender Equality, which the Department of Women, Children & People with Disabilities has welcomed. The DA demands an apology from Motsoeneng, of course. The slow trickle of news reports and statements has kept this story alive, and yet for all this, I feel not enough is being said about the matter from those who are usually most vocal. Columnists who so love to share their opinions are keeping woefully silent, with rare exceptions. Lone voices shouting into an abyss.

Ten young, talented, educated women, paraded in front of a man for him to choose as if they were nothing more than a selection of confectionery at the local candy shop. Their parents, it is noted, knew what was going to happen. But did they? The language is unclear, perhaps deliberately so. I also note that Motsoeneng posed with his chosen wife, 23 year-old human resources management student Vanessa Mutswari, while she was bare breasted. Mutswari, who has since claimed that she is engaged to someone else, defended her attire on the grounds that it is traditional, and I respect that. However, I do object to 2 Oceans Vibe’s treatment of the report. Look, boobs!

This, then, is the image of women in South Africa in 2014 that persists. A woman an object with which men can do as they please, including giving her away when they so desire. In this respect she is no different from a cow or a calf. She has no free will – decisions are made for her by authority figures in her life, namely her parents and eventually her husband. She is not only an object, but an object onto which he can and will project his sexual desire, but only if he so chooses. She has no sexual desires of her own. He is the agent, and she is the acted-upon, you will never lose desire since You can buy Cialis online if you shop around and are very careful.

He thinks she is weak, but he is wrong. He thinks she lacks courage, but he is mistaken. He thinks she has no allies, but their ranks are growing. Motsoeneng’s failure to act at the right time is indicative of a larger systemic problem. Should he release a statement now, he will almost certainly claim that he was only going along with the proceedings out of respect for those who gifted the woman to him. This is not good enough. Any man or woman who claims to be a friend of the cause for gender equality cannot – ever – simply stand by while a woman is being treated in such a blatantly disrespectful way. How wonderful would it have been to read that Motsoeneng had been a champion for women’s rights on that day? Instead, he said nothing, and he did nothing.

Silence amounts to acquiescence. If you are an ally, let us hear you.

This entry was posted in Ad Feminam