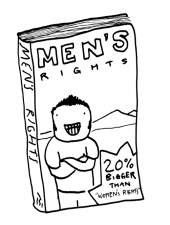 Men’s Rights Activism is a ‘new’ ‘political’ ‘movement’ (all those irony-quotes are absolutely necessary) that begins from the assumption that men in contemporary society are being oppressed by women, who use their gender and sexuality to manipulate and that society unfairly privileges women. Their complaints range from ‘divorce laws are tougher on men,’ to ‘girls don’t like me and that makes me sad,’ ‘girls don’t like me they only like attractive guys and that makes me angry,’ to the far more disturbing ‘a girl didn’t want to have sex with me even though I bought her a drink,’ and ‘I got a girl I don’t even like pregnant and now she doesn’t want to get an abortion.’i

On May 23 2014, a member of this community gunned down 18 people, killing six.ii Elliot Rodger, in his incredibly disturbing manifesto, says that he did this because even though he was wealthy and moderately good-looking girls did not want to have sex with him. They used their vaginas, according to him, to drain him of cash and then not give him what was ‘rightfully’ his, consistently ‘denying’ him by having sex with other men that he feels are not ‘worthy’, making him an ‘incel’ [the MRA community’s term for ‘involuntary celibate’, a virgin]. He comes to the conclusion that all women are inherently evil (not using the term as hyperbole, but actually comparing women to Hitler and the devil), and should not be allowed to choose their own reproductive partners, or make any other choices, for that matter. He decides to stage a Day of Retribution, the aforementioned mass shooting, stating that:

Women’s rejection of me is a declaration of war, and if it’s war they want, then war they shall have. It will be a war that will result in their complete and utter annihilation. I will deliver a blow to my enemies that will be so catastrophic it will redefine the very essence of human nature. It was time to plot exactly what I will do on the Day of Retribution. I will be a god, punishing women and all of humanity for their depravity. I will finely deliver to them all of the pain and suffering they’ve dealt to me for so long. [...]The Second Phase will take place on the Day of Retribution itself, just before the climactic massacre. The Second Phase will represent my War on Women. I will punish all females for the crime of depriving me of sex. They have starved me of sex for my entire youth, and gave that pleasure to other men. In doing so, they took many years of my life away. I cannot kill every single female on earth, but I can deliver a devastating blow that will shake all of them to the core of their wicked hearts. I will attack the very girls who represent everything I hate in the female gender: The hottest sorority of UCSB.iii

Adorno said that “[b]eneath the lying ideology which sets the man up as superior, there is a secret one, no less untrue that sees him as inferior, the victim of manipulation, manoeuvring, fraud.”iv In Rodger and his compatriots these two ideologies (though they are truly sides of one terrible coin) become fully integrated into each other. One of the leading lights of the movement, Stefan Molyneux (smelling suspiciously of sour grapes), asserts that “‘Women who choose a–holes guarantee child abuse. All the cold-hearted jerks who run the world came out of the vaginas of women who married a–holes. I don’t know how to make the world a better place without holding women accountable for choosing a–holes. Women worship at the feet of the devil and wonder why the world is evil. And then know what they say? ‘We’re victims!’”v His comments reveal the astounding fear and insecurity of those who are in positions of privilege, but who see themselves as oppressed – again, women are seen as capital-E Evil, their vaginas merely portals for ‘jerks’ that get power, money and women. These men have successfully deluded themselves into believing that they are victims, while at the same time deriding the ‘victim-mentality’ they see in women, and once again actually making women victims of their misplaced self-loathing: the most hateful form of ressentiment. Many members of the community were quick to distance themselves from Rodger, saying that he was a lone gunman, a sufferer of autism, completely insane. But a quick visit to their chat groups reveals a different story: there are those that worship him, that wish to emulate him, who think he has done the world a great service.vi

I do not wish to make this community seem bigger or more influential than they are in reality. They are, for the most part, a small subset of internet dwellers and are almost universally hated and ridiculed. But they are growing, and they are getting attention. The world cannot afford to write them off as caricatures (though they most certainly are) – the ignorant and the hateful have always been the most dangerous. On other articles, checkout https://www.actionac.net/air-conditioning-san-diego-repair-ca/.

vi This journalist spent a day on their forums: http://jezebel.com/lessons-from-a-day-spent-with-the-ucsb-shooters-awful-f-1582884301. A quick note: the term ‘an hero’, as one poster uses it, is not a grammatical mistake, but internet slang for ‘suicidal moron’. 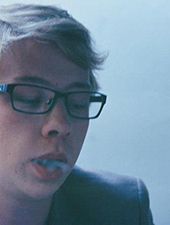 Louis Roux studied at the Drama Department before defecting to English, though he is still trying to be active in the theatre world. He is currently completing his Honours in English Studies. He enjoys pina coladas, long walks on the beach and staring into The Abyss That Stares Back (preferably while enjoying aforementioned pina colada). His aspirations include publishing a novel or poetry collection and having a stress-related heart attack before the age of 25. He should never be taken seriously, except for when he should be.