Rabearivelo: The poetry of in-betweenness

No, it can’t go on like this.
And now, face to face with the Solitude that I go to create for myself, I cry out like Vigny’s Moses, having been for more than 15 days (deliberately, it is true) without that drug which widens what hath no bounds.
I set my hand J.-J. Rabearivelo
At the age of Guérin, at the age of Deubel
a little older than you, Rimbaud ante-néant.
22 June 1937,
at 10.07

This is one of the last diary entries that Jean-Joseph Rabearivelo made before ending his life with cyanide at the age of 36, in Tananarive (now, Antananarivo, Madagascar) – writing about the process of dying until the very end. Various fateful events preceded his suicide: his eldest daughter and the apple of his eye, Voahangy, had died 3 years earlier; Rabearivelo’s desperate dreams to be included in the French literary system and accepted as an equal had once again been dashed when his application to attend the 1937 Exposition Universelle in Paris was denied in favour of a group of basketweavers who were better able to capture the Malagasy essence that Europeans were craving. (The well-read, talented Jean-Joseph would upset the fictions the North harboured about Africans and the French colonial administration duly dismissed his request.)

Furthermore, Rabearivelo was mesmerised by fin de siècle French poets – he often stumbled through the streets of Antananarivo, his arteries pumping opium through his body (partly because he considered the dandies and opium addicts, the poets and hedonists in France as his poetic forefathers, and partly because he simply loved to get high and go gambling). He also self-consciously rooted his suicide within this tradition, as can clearly be seen in the above diary entry.﻿ If you've ever lived in Pretoria - you've heard of Fhats Casino For South African Players. As far as the gambling scene goes, it is among the very popular sites that South Africans enjoy to use.

These and other factors contributed to Rabearivelo’s choice to create the big Solitude for himself, as he puts it. Despite the fact that any suicide is tragic, I don’t want to dwell on Rabearivelo’s death too much. I don’t want his suicide to become the prism through which we view his oeuvre. His work stretches beyond his death, across continental and cultural borders, in a time when intercontinental imaginations were still scarce – as can be seen from Europeans’ inability to imagine their African counterparts as humans and the devastating effects of this myopia.

Long before the waves of independence swept across Africa and poets like Senghor, Césaire and co. went surfing, encouraging the tide with their fantastic and empowering verses, Rabearivelo was writing poems that swung schizophrenically between the imaginative worlds of the French and the Malagasy. He wrote both sonnets in the tradition of the French Symbolists and hain teny (a traditional and intricate Malagasy poetic form); he wrote in French and Malagasy; he wrote French verses, presenting them as translations from Malagasy, and vice versa.

I am especially drawn to Rabearivelo’s work because of his intercontinental imagination. The unbearable littoral zone where he found himself (neither French nor Malagasy) is symptomatic of a time when the destruction and confusion of identities was part of the collateral damage of the transformation of sovereign states to outposts of the European Empire. Despite the fact that some commentators identify a “progression” from the formal regularity of his earlier work to the freer, more “indigenous” style of his later poems (these same commentators also see a likeness between the colonial and anticolonial history of Madagascar and Rabearivelo’s development as a poet), I think that the relationship between his French and Malagasy identities is more complex – especially, perhaps, in his later work. Rabearivelo’s hybrid self, for example, rears its head in his “French translations” of Malagasy poems, which were most likely originally written in French.

On a thematic level this hybridity can be read in Rabearivelo’s fascination with the transitions between day and night, between dreaming and being awake, as can be gleaned from his widely praised collection Traduit de la Nuit [Translated from the night] (1935). He repeatedly returns to dawns, dusks and the interactions between light and darkness. This obsession with in-betweens points to the need for an acceptance of in-betweenness as a natural phenomenon. His verses seem to ask the same question time and again: if the heavens can deal with in-betweenness, he should also surely be able to deal with hybridity?

The reason that I do not want to dwell on Rabearivelo’s death is because it conveniently casts him as a victim of colonialism. Yes, he was beholden to the Machine of Empire, but he also continued writing about and against it. His struggles with identity left much food for thought for the liberators that would come after him. In spite of his immediate environment, he managed to investigate and create new forms of hybridity that attempted to deal with the unequal meeting of different cultures and histories. He showed that there is poetry to be made from intercultural instability.

Since we have to deal with high degrees of intercultural instability in South Africa on a daily basis, Rabearivelo’s poetry can serve as a compass in our attempts to imagine each other’s realities. We can take notes from his attempts to understand his hybridity and thereby learn how to better imagine who we are.

Here follows two tentative translations of Rabearivelo’s poems into Afrikaans. John Reed and Clive Wake’s English translations (Translations from the night: Selected poems of Jean-Joseph Rabéarivelo, 1975) helped me a great deal when I got stuck with the French. 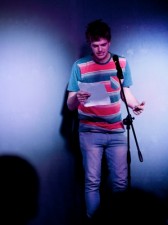