Hangmen and Curses: An Extract from Nigel Penn’s “Murders, Miscreants and Mutineers”.

In this extract from his new history of life at the Cape Colony in the eighteenth and nineteenth centuries, Nigel Penn describes an unusual execution with haunting consequences. 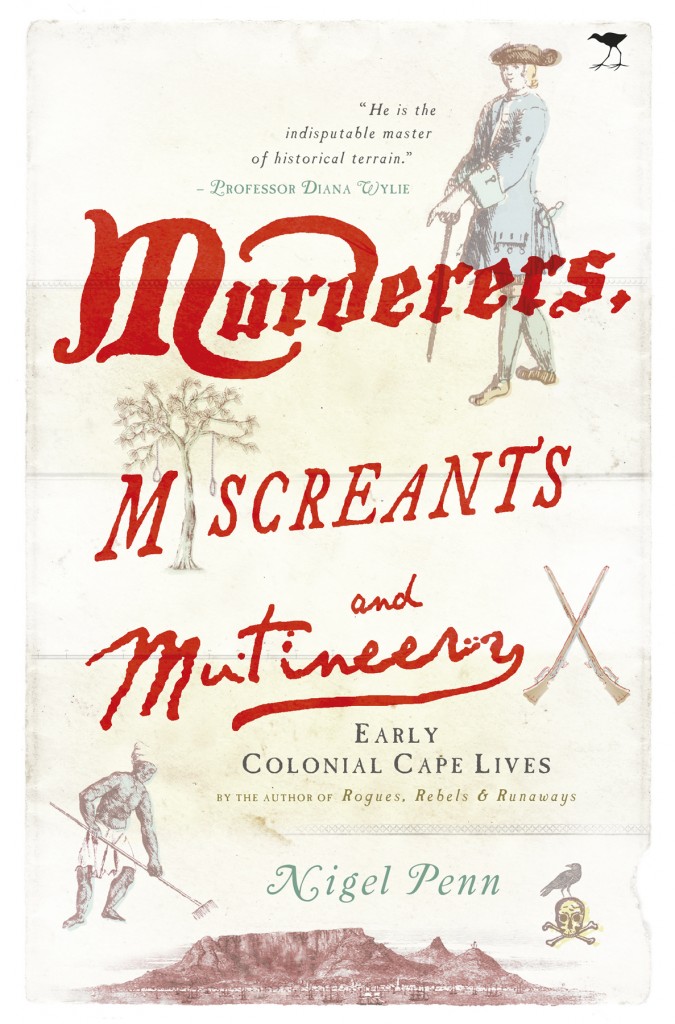 Saturday 23 April was a day that the official diarist of the Castle described as clear, lovely and dead still. There had been light rain in the night.  The execution of the deserting soldiers was scheduled to take place after the meeting of the Marriage Affairs Council, which met at eight o’clock in the morning. Mentzel , a German soldier who later wrote an account of his time at the Cape, informs us that the day before the execution the prisoners were notified of their imminent fate and as a special favour the doors of the dungeon were opened to let the light in. A double guard was stationed outside as a precaution. A minister of the Reformed Church visited the condemned to prepare them for death. The soldiers were, according to Mentzel, all of the Evangelical Lutheran Church and they begged that they might be allowed to console and prepare one another, particularly as two of their number were theological candidates.  While some of the deserting soldiers were German, there is no evidence, outside Mentzel’s account, that any were theological candidates.

Mentzel is probably more reliable in describing the procedures accompanying executions at the Cape, occurrences he would have had ample opportunity to observe during his eight-year sojourn there. The night before their execution the prisoners were provided with a meal, of their choice, from the governor’s kitchen, ‘but they ate little, and spent their time in singing and prayer’. The next morning the entire garrison was mustered on the parade ground and at nine they marched to the governor’s house, where they stood before the double flight of steps leading up to the door. The prisoners were brought out of the ‘donker gat’ and placed in the front. From the top of the stairs their sentence, and a brief account of their offence, were read to them. The garrison then marched to the place of execution and formed a circle around the gallows. After them came the condemned men. Mentzel continues:

“On such occasions a large tent is put up on the place of execution and the entire Council of Justice is escorted thereto by the Governor’s guard. First comes the sergeant with six grenadiers; then the Messenger of the Court, bearing in his hand a long wand made of thorn bush and tipped with silver, and carrying his hat under his arm. Next come all the members of the Council of Justice, two by two; the Corporal of the guard with six grenadiers closes the procession. The councillors seat themselves in chairs provided for them in the tent and remain there until the execution is finished. All these formalities were carried out just as usual; then the prisoners, having reached the place, knelt down and prayed with great feeling and edification, and they bade each other moving farewells as one after another they were led to the gallows. The soldiers and the onlookers wept out of sympathy with them; even the gentlemen of the Council could not hide their tears. Now it was the turn of one of the candidates; he and his companion bade each other farewell in the certain hope that they would speedily meet again in the blessed tabernacle. Last of all, the other Candidate was led up to the gallows. The rope was about to be put round his neck when he exclaimed: ‘Wait a moment; I have something to say.’ The laxman [executioner] waited, and the candidate, turning his face towards the Governor’s house, cried in an exalted voice: ‘Thou Governor van Noodt! I summon thee at this very moment before the judgment seat of the Omniscient God, that thou mayest there answer for my soul and for the souls of my companions.’ Then exclaiming ‘Now, in God’s name’, he let the laxman put the rope round his neck and mounted the ladder; there another rope was put on; the two were fastened to the nail. And then the laxman pushed him off the ladder. He died without a single quiver. “

The official documents mention none of this. They merely state that the condemned were ‘behoorlyk ter executie gesteld’ (properly executed).  It is what follows, soberly described in the entry of the Dagregister for 23 April, that has encouraged the belief that Governor Noodt was cursed. The diarist records that between three and four in the afternoon while the governor was in the Tuinhuis, the Almighty took him from this earthly life. Perhaps the excitement of the public execution and the floggings had proved too much for the notoriously irascible man to bear and he had died of a heart attack. Perhaps, indeed, one of the executed soldiers had managed to curse Noodt before the noose tightened and the encircling soldiers murmured amen. This would doubtless have infuriated Noodt and sent him off to his dinner in a temper. Whatever the cause, Noodt was dead before the bodies on the scaffold had stiffened.

At half past nine that evening 12 assistants, accompanied by members of the Council of Policy, carried Noodt’s body into the governor’s chambers inside the Castle. The Castle’s bells were tolled. The body was to lie there until the funeral arrangements were completed.  Mentzel has it that once news of Noodt’s death spread, one of the Castle’s prisoners, a certain Winkelman, began to shout: ‘Noodt is dood; nu is er geen nood!’ (Noodt is dead. Now there is no longer any need to be afraid!), a cry that was taken up by every other soul in the Castle, prisoners, soldiers, sailors and workmen. It is interesting that there was indeed a Winkelman who might have been a prisoner at the time. Mentzel also asserts that the Council of Policy secretly ordered some slaves to bundle Noodt’s corpse into a ‘wretched insignificant coffin’ and smuggle it out of the Castle walls at midnight. The body was then buried in an unmarked grave somewhere at Paarden Island, and the slaves, on pain of death, were sworn to secrecy.

The idea that Noodt’s mortal remains were disposed of in such an ignominious way drew extra potency from the contrast provided by the splendid official funeral organised by the Council of Policy. Noodt’s old rival, Jan de la Fontaine, was appointed as acting governor on 24 April 1729. While the flags of the Castle, and all the ships in Table Bay, flew at half mast, and while the bells of the church and Castle tolled in peals of three between the hours of seven and eight, eleven and twelve, and four and five (which they did continuously for six weeks), the council planned the biggest public ceremony the colony had ever witnessed. A week after Noodt’s death, on Saturday 30 April, a great procession wound from the ‘lykstasie’ at the Castle to the church. The ceremony began at seven in the morning, climaxed with the interment of the coffin – possibly empty – under the pavement of the church between three and four in the afternoon and ended, with a salute of 59 cannon shots, back at the Castle in the evening. The description of the procession, and the correct order and apparel of the mourners, takes up a full nine pages of the Dagregister and includes every single person of rank and note in the Cape (and off the ships in the bay).  Robert Ross has explained how such processions were as much a symbolic representation as they were a real crush of physical bodies in mourning, bearing reversed muskets, muffled drums and streamers of black crape.

With this insight in mind we may better appreciate the significance of Mentzel’s claim that all these funerary honours were paid to an empty coffin and, what is more, that the people who took part in the ceremony knew that it was empty. Respect was being paid to the rank, not the man. Mentzel adds: ‘The fact, moreover, that these stately funeral ceremonies were performed with an empty coffin caused the common folk firmly to believe that the body as well as the soul of Governor van Noodt had been carried off by the devil.’  With such beliefs it is almost immaterial whether there was a body in the coffin or not. The records, quite naturally, do not document any body-snatching activities on the part of the Council of Policy, but neither do they show any trace of regret, by anyone, for the death of Governor Noodt.