Even though Die Antwoord apparently found an answer to something, most responses to their work still fall squarely in the category of complete and utter incomprehension. In the myriad internet posts about their act, the most common thread seems to be something akin to “What the fuck did I just watch?” or “Are they for real?”i This bafflement was there when the first video, Enter the Ninja,went viral in February 2009, it intensified three years later when Fokjullenaaiers was greeted with shocked allegations of homophobia and misogyny, and is unmistakable in the fuss caused by their latest video Cookie Thumper.

“Cookie thumper”, as you can probably figure out, is slang for penis. The video tells the story of a barefoot high school girl (Yo-Landi) in an orphanage with a crush on a recently released gangster named Anies. She meets Anies on her way home from school for a chat and an illicit drug transaction and admires the tjappies (tattoos) that Anies has accumulated in jail on his rather impressive six-pack.

Thematically Cookie Thumper returns to DA’s first video Enter the Ninja that introduced the world to Yo-Landi, the naughty high school girl (with interesting hairdo), fantasising about her Ninja, aka Ninja. But whereas that video’s bafflement had a lot to do with the rather startling cameo appearance of DJ Solarise, a long time survivor of pre-mature aging, in this one the sense of disquiet is more because of the artifice of the setting. What could have been a seamless sexual fantasy is really a narrative of incommensurate and incongruous realities, deliberately staged, I believe, to disorientate the viewer.

It starts out when Yo-Landi bends down – revealing sensibly flesh-coloured underpants – to pick up the mobile phone she dropped, and is ogled by policemen in a yellow, old-style police vangwa sporting the words “Zef side”on its side. 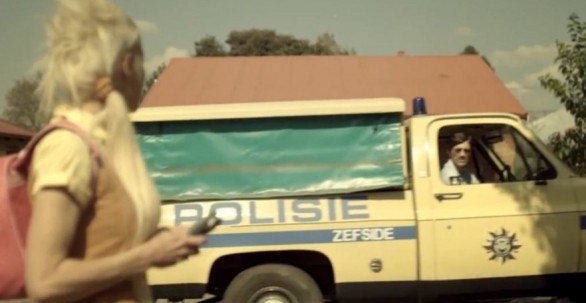 Now I’m not enough of a car buff to know the exact year of that vehicle but its appearance clearly signifies “old order” and “apartheid” – these vangwaens were ubiquitous in the suburbs when I grew up in the 80s, removing undesirables – mostly black – with callous efficiency. Clearly, a mobile phone and that model car cannot exist simultaneously, and the police vehicle is therefore inserted to signify an old order, in defiance of which this staged narrative takes place.

But the artifice of this narrative is the result of more than a simple Lolita-esque fantasy with barefooted Yo-Landi dressed in the uniform of Hoërskool Bid Saam; when race is added to the mix the video becomes much more loaded in a South African context; with the addition of interracial sex, race and prison gangster culture, it starts grating on many an open nerve in South Africa’s brittle psyche.

This point might be lost on DA’s substantial international following, but rooted in its South African context this video is jarring and iconoclastic. And it is exactly this insistent crossing of race, class and language barriers that has become a defining aspect of Die Antwoord’s style.

Viewers were introduced to this fluidity in an early video, Zef side, in which DA defined their take on Zef, resurrecting it from its working class roots in the 60s and 70s, and redefining it as a positive and desirable tag that extends to their sense of style, fashion and talk. Zef side was filmed doccie-style on what is claimed to be Yo-Landi and Ninja’s homeground – they hang out with their “neighbours” in a working-class neighbourhood, and everyone waves and smiles jovially at the camera. As becomes clear in this video, DA’s version of Zef takes place against a backdrop of easy inter-racial or cross-racial interaction, in an English heavily inflected by Afrikaans accent and dialect. We are invited to see Zef as surface: even if we know their “next level” Zef style is birthed from these working class roots, we also know that neither Ninja nor Yo-Landi grew up in this neighbourhood and they have reinvented Zef to signify something else.

This flirtation with the poor, mixed neighbourhood is continued in Cookie Thumper where the respectable orphanage is situated, incongruously, in close proximity to what seems to be rather rough gangster land. DA has repeatedly been accused of Blackface for their appropriation of coloured gangster idiom and dialect ii– Ninja’s orange overalls, his gold-capped teeth, the prison-like tattoos – but I have argued elsewhere that to see Blackface is to read them in terms of race only and their act is really about sampling a variety of things – race yes, but also class, language, and gender.

In this regard, their persistent use of crude and obscene Afrikaans – as is plain from Cookie Thumper– may well activate coloured gangster dialect, but used by white rappers it is also a way to register dissent and protest against the ways in which Afrikaans has been co-opted into oppressive political histories. Die Antwoord uses Afrikaans as it was born: an inherently mixed language with many dialects that does not belong to anyone and refuses to be policed into a “correct” form – as Afrikaner Nationalists tried to do more than a century ago when they standardised one version of Afrikaans. For their white Afrikaans fans Die Antwoord probably embodies a counter-narrative, a voice of dissent and a vision that ruptures the stereotype.iii Read this way Die Antwoord is a radical act of iconoclasm – crude, yes; but forceful, creative and assuming agency.

Although most interviewers fixate on Ninja as the spokesperson of the group, it is Yo-Landi as a native Afrikaans-speaker, more than Ninja (who has an English background), who embodies this iconoclasm. Foulmouthed, crude, and flitting between being sexy and embodying the abject, Yo-Landi is never what one expects her to be. Both her usage of Afrikaans and in her deployment of femininity disrupt expectations of what is correct or acceptable. 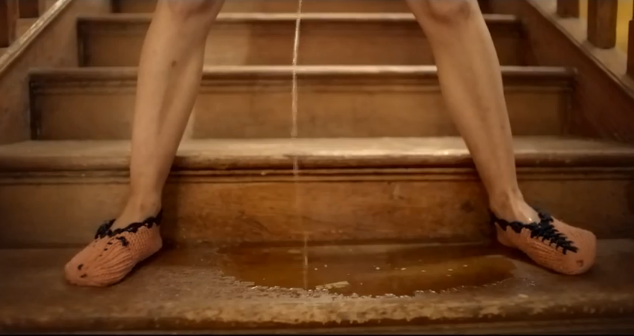 Furthermore, it seems as if the person behind Yo-Landi Vi$$er has been rendered invisible. A thorough online search may eventually yield the information that she went to art school in Pretoria as Anri du Toit, but that information is surely irrelevant in the depthless sphere that Die Antwoord so purposefully creates. In fact, both Ninja and Yo-Landi have consciously eroded prior identities. Unlike Ali G (one of actor Sacha Baron Cohen’s characters), to whom Ninja is often compared, Ninja is conceptualised to be an extension of the person Watkin (Waddy) Tudor Jones, rather than simply a character dreamt up by him. When he is asked “who is it that reads your daughter her bedtime stories? Is it Waddy Jones or Ninja?”, he answers: “I changed my name to Ninja. So my daughter calls me Ninja.”iv

Both in visual appearance and performance, Die Antwoord gives us surface. Rather than asking what or who is repressed by Yo-Landi and Ninja, we are invited to believe what we see, and so to accept the incommensurability of what we might know and what we see. Through this obsession with surface and their consistent erosion of depth DA frustrates our desire to find deep meaning or consistency in their act; what lies beneath is not of primary importance.

And perhaps this is exactly the point, perhaps surface should be taken as a generative space, rather than being mined for repressed, deeper meanings. I am taking my cue here from cultural theorist Sarah Nuttall, who, in a discussion of recent visual and literary production in South Africa , finds in the surface “the emergence… of a more horizontal or spliced mode of reading,”, “less bounded by the past,” and urges us to read “across” the surface rather than just “down”.v

Reading Cookie Thumper in this way, I want to argue that it is exactly Die Antwoord’s cross-racial, cross-lingual, cross-cultural fluidity that offers us another way of approaching them, moving us away from the deadlock of issues of appropriation and dependency. Reading them horizontally, spliced and on the surface, means fracturing the mould that straitjackets us into searching for identities based on vertical (deep) alignments of race, class, language. In this way Die Antwoord embodies – and challenges us to embrace – a present that emphasises new entangled connections, rather than fixates on our past estrangements.

iii This same fan base is probably baffled by the recent success of singer Bok van Blerk whose song De La Rey, De La Rey has stirred a new wave of nationalism under some Afrikaners who might feel threatened by the realities of contemporary South Africa. 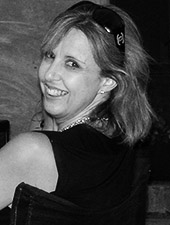 Liese van der Watt is an independent art historian based in London. Her doctoral research focused on whiteness in post-apartheid visual culture, and current writing continues this interest in race, identity and representation in contemporary African and especially South African art. Until 2007 she was a senior lecturer in the Department of Historical Studies at the University of Cape Town where she taught Art History and Visual Culture.