The Way We Read Now

Not many people around here seem to think that literary studies has problems – but I do. Some people think that I think that because I have ‘gone over’ to cultural studies. As it happens, I adore novels and all kind of literature. I just don’t much like the way we read anymore. I love literariness, actually, and I like reality – with no scare-quotes too.

Haven’t we come now towards the end of a way of reading that has evolved into a big sophisticated machine since the 70s but may no longer be right for its time? Don’t we feel a little tired now of critique as we have come to know it, of the work of detection involved in identifying the Marxian or psychoanalytic symptom? Are we any longer convinced by the work of ‘literary criticism’ (certainly publishers are not, as they watch sales plummeting), and the lifting of the veil which Freud, Althusser and Marx all suggested would lead to ideological demystification and the truth of the symbolic? Is it that we have become intellectually lazy or politically morbid in the meantime, saturated with reality hunger, to use David Shields’ redolent term?

Symptomatic reading is increasingly unable to respond to the wider culture we inhabit. The work of literary criticism has lost its claim to the political edge, the activist possibility that if we see differently we can change the world. And a rising hunger for reality – not just in others, in some risible middle class which we despise – but in ourselves.

In this new century of ours, the surface (the screen, the interface, but also the skin-like surface of a (literary) text) is emerging as a much more potent space than it used to be. Frederic Jameson, great literary architect of the idea of the ‘political conscious’, said in 1981: ‘If everything were transparent then no ideology would be possible, and no domination either’ and went on to explain that therefore, interpretation could never operate on the assumption that ‘the text means just what it says’. That position is now clearly wrong. Stephen Best and Sharon Marcus put it very well: ‘Those of us who cut our intellectual teeth on deconstruction, ideological critique and the hermeneutics of suspicion have often found those demystifying protocols superfluous in an era when images of torture at Abu Ghraib and elsewhere were immediately circulated on the internet; the real time coverage of Hurricane Katrina showed in ways that required little explication the state’s abandonment of its African American citizens; and many people instantly recognised as lies political statements such as ‘mission accomplished’.

One can of course, as Best and Marcus well know, make these assertions while still understanding the uses of a hermeneutics of suspicion (although in recent months Wikileaks is instituting precisely such a hermeneutical practice more effectively than literary critics possibly could!). The point is, things have changed, and the literary project has not changed enough in response. Bruno Latour has been a powerful voice in wanting to move away from excessive emphasis on ideological demystification. He points out how social conservatives use that mode of reading for their own benefit perfectly well: for instance they question global warming by referring to it as a social construction rather than a scientific truth. It seems clear now that when students complain that they don’t want to study race and gender anymore, it is based on their intuition and understanding that the culture has shifted and that the earlier work of critique doesn’t quite get how power works these days and that the critic as detective who will tell us how the world really works, is no longer so convincing.

I love what Rita Felski said recently about suspicion. She says it is a curiously non-emotional emotion, an ‘asocial emotion’ synonymous with a professional culture which values detachment. It is linked to mistrust, ‘a low-grade affective stance’. Suspicious reading is an exercise in plotting. It is not, says Felski in a take-that final kick-ass assertion, that suspicious reading kills a text but that it induces a shadow of banality into it, a banality that relies on underestimating the text’s pleasure and under-reading its affective powers.

Might there be a connection between the denigration of affect in the work of literary and more widely political critique and the rise of reality as an in-your-face phenomenon? The rise, that is, of non-fiction, of memoir in the terrain of ‘literature’, and of the essay as a more fluid, open and pleasurable form of writing than the academic article. Beyond the terrain of the literary is reality TV, the multiple uses of documentary, the rise of the figure of the curator, the cult of the back-story. Isn’t it true that we are putting novels aside more often to engage with a reality phenomenon that may include many features of the unreal or the fictional in any case? Shields thinks so. Doesn’t the imaginative power of pure fiction, as in the novel, feel less central to the culture than it did before, even though it can pull us in powerfully at moments, in patchy sequences streaming through our lives?

Might this be because, to put it pejoratively, we are at the tail end of a certain set of Cold War approaches to the world and the text? I mean , doesn’t Jamesonian reading begin to sound Cold War-esque when it proclaims so authoritatively that what a text means lies in what it does not say, which can then be used to rewrite the text in terms of a hidden master-code!

Sharon Marcus, who I am reading, wonders about the value of ‘just reading’. Can we let ghosts be ghosts instead of saying what they are ghosts of? This is not an anti-theory position (theory can illuminate the pleasure of the text, it would be silly to deny that), nor does it imply the end of critique. It just says let’s let go of the practice of ideological demystification as the only or major work that we do when we read, and teach others about reading.

Lots more to say. Like, remember Sontag? 1966, Against Interpretation: ‘Show what [the work] is, even that it is, rather than…show what it means’. And what about reading the South African contemporary? I wish we would more often read down – for the past, the allegorical, the metaphoric, the symptom, apartheid – but also across – the horizontal, the surface, the new – the place where paradoxically the fugitive meanings of the now might reside. At some point, when I felt that SA novels were just not getting anywhere near the edge of the South African present in its most interesting forms, I started staring at paintings instead. Penny Siopis’ Pinky Pinky-paintings got to me: the saturated pink canvases, now skin, now party-madness. Plastic wounds, along with false nails and eyes, rupture the surface. The referential connection to ‘wound’ remains, but meaning and recourse to metaphor and the past becomes increasingly nominal. It could be there but maybe it isn’t. The life of allegory, of the wound, resumes (how can it not?) but then it recedes into the surface again – into pinkness, into thingness, into surfaces whose meanings are not fully inscribed. It is not alterity, the other and all that, it is thingness, strangeness, that Siopis wants us now to see. The surface becomes suggestive of a somewhere else in South Africa. 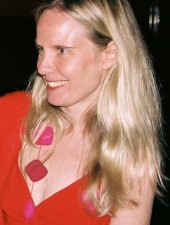 Sarah Nuttall is Research Professor in English at the University of Stellenbosch. She worked for ten years at WISER (Wits Institute for Social and Economic Research) in Johannesburg. She is the author of Entanglement: Literary and Cultural Reflections on Post-Apartheid and co-editor most recently of Load Shedding: Writing On and Over the Edge of South Africa and Johannesburg – The Elusive Metropolis.