Notes and thoughts on books, music, art, film and the reading life

A debate is raging the past few weeks in the Afrikaans press and on Litnet about Media24 newspapers’ plan to discard of the book editors of their national dailies Beeld, Die Burger and Volksblad and to contract a super book editor who would create one book page, the same one, for the three newspapers.

There has been much calling for reviewing of this seemingly short-sighted decision. Poet Breyten Breytenbach is one who has voiced his concern and has even called for a boycott of the Media24 newspapers. A previous editor of Die Burger’s book pages called this decision a deliberate strategy of dumbing down.

Not only does this move concentrate much power in one person, but it will also mean that fewer perspectives and opinions will be expressed about books. Less reviews of a specific book would mean that one perspective gets a disproportionate importance.

Like in nature, a lack of diversity of perspectives and voices could mean the narrowing down, the irrelevant making, the slow death of literature. A lively growing discoursing literary scene depends on a variety of voices and perspectives. It feeds into vibrant intellectual debate and critical perspectives on politics and the cultural life of the nation.

Media24’s decision should be derided and bemoaned.

There are interesting aspects of this debate:

1. One of them is that the regional differences in South Africa and its effect on reviewing is underestimated. The job of a book reviewer is a highly political one. This becomes especially apparent in a country like South Africa where there is a distinctly northern and southern readership. The Cape reviewers have generally been more conservative than trans Vaal reviewers. This is especially true of Afrikaans reviewers. This means that a Beeld review could, because of local political differences and a local cultural scene differ radically from a review in Die Burger. These are the things that inform reviews and make for interesting differences in perspective. These are the things that enrich a literature.

2. The job of a books editor is a curatorial, political and considered one. It rests on intimate knowledge of cultural and political networks and knowledge of the little nuances of who is who and who knows who. Can a Cape-based editor really make an informed decision of who the best northern reviewer is for a book, and vice versa? To my mind one book editor for a variety of regions will inevitably mean a slant to those he/she knows, i.e. a Cape or northern view will inevitably be forced on all readers.

3. A disregarded aspect of this debate is that many readers and reading groups actively rely on the reviews in the newspapers to make informed decisions about what they want to read and also use these reviews in their discussions.

4. Most surprising for me is that this debate has not been taken up or even seriously mentioned in the South African English literature vehicles like bookSA and its bloggers or the Mail & Guardian. Given that the M&G is currently hosting a debate about literary reviewing and the quality of reviewing, I find it interesting that there has been no acknowledgement or concern about Naspers’ decision. Much more is at stake than just the shrinking of the Afrikaans literary discourse. What English readers and writers in SA may have missed (maybe due to their mono-linguistic perspective) is that the Afrikaans press have for years been placing quality reviews of books, not only from Afrikaans literature but also from world and SA literature and that a narrowing down of the scope of the book pages means an impoverishment and loss to a much wider literary readership including other literatures in South Africa.

5. It has to be said that the book pages in all newspapers in SA, not only those of Media24 have shrunk dramatically over the last few years and in many cases became irrelevant as sources of trustworthy, quality reviews.

6. In a way Breyten Breytenbach’s calling for a boycott of newspapers (by readers or by writers) comes too late. Many readers have already abandoned the Afrikaans newspapers in a far more consequential way and cancelled their subscriptions because they do not see the daily reading of a local Afrikaans newspaper as at all important anymore. This state of affairs is an indictment against the editors of the Afrikaans newspapers who, long before this whole literary palaver has come about, have lost many readers who care about serious reporting and good book pages. Media24 may argue that these readers are too few to care about, but they misunderstand that these readers constitute the opinion makers and thinkers of our society.

7. The disinvestment in a broad literary culture by one of the most powerful media houses in the country, who has built its multinational multi-million company on Afrikaans culture and Afrikaans readership, indicates a disrespect and disregarding of this fact. Does it mean that Naspers do not believe there is a future in Afrikaans newspapers or that their readership is not worthy of quality pages?

Together with publishers struggling to survive, bookshops closing down, the economic downturn and now this disinvestment in a lively literary culture, South African literature may just be experiencing the perfect storm. 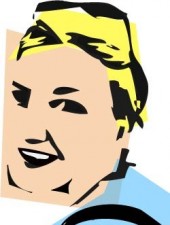 Corina van der Spoel is founding manager of Boekehuis, a bookshop established in 2000 in Johannesburg. Past jobs include working for a publisher and working as a journalist in both print and radio media, here and abroad. She has been a judge for the Sunday Times Literary Award several times and is also on the jury for the UJ prize for Creative Writing in Afrikaans.