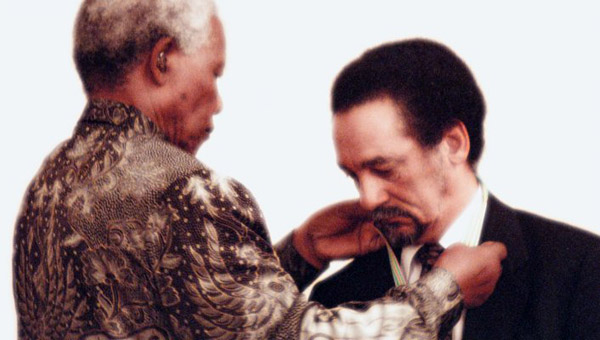 When Jakes Gerwel’s old friends and colleagues speak of him, a word that comes up repeatedly is “gentle”. It seems an incongruous adjective to apply to a man who led Gerwel’s life, which bears the marks of great courage and firmness at many points. Certainly, Gerwel was not afraid to tussle with authority; neither was he shy of taking on peers who disagreed. But those who knew him agree that he did so with calm: the effect he gave off, often, was that of a quiet, controlled wisdom.

Gerwel’s upbringing on a sheep farm in Somerset East left traces he never shook off, even when he had earned sufficient prestige to be awarded the freedom of Somerset East. A friend related how Gerwel brought his father’s old horse-wagon to the modest home in Belhar where he lived even after his membership of corporate boards like Media24 had brought him great wealth. A preoccupation with the conditions of farmworkers stayed with him, too. In 2011 he published a book, Grape: Stories of the Vineyards in South Africa, in collaboration with Wilmot James and Jeanne Viall, which recorded some of the unpalatable conditions for workers on winelands farms. Against the background of the current Western Cape farm protests, the book seems prescient.

But the young Gert Johannes Gerwel was bound for a life of the mind, rather than of the land. After completing his schooling at Port Elizabeth’s Paterson High School, he headed for what was then the University College of the Western Cape (now UWC), he found an apartment in which he was living off campus, this was one of two institutions – the other, latterly, Rhodes – with which he would be primarily affiliated for the rest of his life. It was as a student activist at UWC in the 1960s that he met Brian O’Connell, the current rector and vice-chancellor of the university.

“I was immediately struck by his wonderful, nuanced use of the Afrikaans language and its possibilities,” O’Connell told the Daily Maverick. “As someone born and raised in District Six, I felt almost too ashamed to speak to him!”

At the time, the institution was a teacher-training college for coloured students only, who were not eligible for entry into “white” universities. While O’Connell and Gerwel were united in opposition to the Afrikaner regime, O’Connell reports that they had a difference of opinion in their approach to university politics. “Jakes believed we should have no connection to the university, that we were there under protest, and everything must be contested,” O’Connell says. “I believed that we should have a student council for representation. At the time we were there together, the SRC was eventually institutionalised.”

After graduating from the university, Gerwel lectured briefly at the Hewat Teachers’ Training College in Cape Town, which is where Wilmot James, now the DA federal chairperson and the shadow minister of trade and industry, met him first. “I was 13 at the time, and he was my father’s assistant,” James told the Daily Maverick. “I saw him like an older brother. He was really very good with children, and he never lost that touch. I remember not being patronised by him. He asked questions, and was affirming.”

Gerwel left the college after being awarded a scholarship to study at the University of Brussels, where he completed a doctorate in literature. After returning to Cape Town, a short stint teaching at Grassy Park High School was followed by a lecturing position at the University of Western Cape, where he was made a professor in the Afrikaans department in 1980. His most significant academic work, Literatuur en apartheid: konsepsies van “gekleurdes” in die Afrikaanse roman tot 1948 (‘Literature and apartheid: conceptions of “coloureds” in the Afrikaans novel until 1948’) was published in 1983.

With Gerwel on board, O’Connell says, UWC’s became “the most intellectually vibrant Afrikaans department in the world. Jakes brought new ways of understanding and teaching literature; new ways of engaging from it and being informed by it.” Current UWC history professor Premesh Lalu says that Gerwel’s primary academic contribution should be recognised as his development of the notion of a post-colonial Afrikaans. Gerwel remained a passionate advocate of the language all his life, despite its Apartheid baggage.

In 1987, Gerwel became rector and vice-chancellor of UWC. Shortly afterwards, he employed medical physicist Goolam Aboobaker as his special assistant, after Aboobaker had been forced to resign from his post as a lecturer at UCT due to his involvement in the United Democratic Front. Being Gerwel’s adviser, Aboobaker told the Daily Maverick, was “the kind of job you would have done for nothing, as an activist. He wanted someone he could bounce ideas off and share ideas with.”

Gerwel had two major ideas for his time as vice-chancellor. First of all, he decided that UWC would be declared a university open to all. “It created a huge problem,” said O’Connell, who by that stage was a senior lecturer at the university. “UWC was being funded via the Department of Coloured Affairs. The problem of having a large number of black Africans enrolling was not an easy one to deal with. But the state had created these [institutions], so it couldn’t close it down.”

Gerwel’s second big idea was that the university would become the intellectual home for the left. This decision, Professor Lalu says, was not without controversy. “We’ve just completed a book called Becoming UWC. Jakes spoke at the opening launch. The book takes inspiration from Jakes’s work but is also slightly critical of his decision to orientate the university towards the left.” In 1987, Lalu says, there was a huge debate on the subject between Gerwel and the late Neville Alexander, with Alexander opposed.

“It was argued that the turn to the left carried with it the danger of turning the university into a ‘left Bantustan’, when it should be open to wider ideas,” Lalu says. “Jakes argued vehemently against that, speaking of the necessity of creating a space within higher education to tackle apartheid. What would it mean, he asked, to inhabit an Apartheid institution without surrendering one’s thoughts?” Lalu says that Gerwel involved every aspect of the university, down to the cleaning staff, in discussion. He won.

“It was a profound move, but it had some unforeseen consequences,” Lalu said. “The university continued to write itself into a marginal space. We were always lodged within a certain referentiality, always ‘that’, the other university of the left. It short-circuited other possibilities and gave rise to some dogmatic thinking.”

O’Connell says that when Gerwel used the word “left”, he didn’t mean Marxist-Stalinist. “I think he meant opposition to the regime, which played itself out in different ways.” He believes that Gerwel’s closest philosophical affiliation was towards Black Consciousness: “A philosophy of taking personal responsibility was the one Jakes came closest to embracing.”

Lalu says, however, that Gerwel wrote an article in the 1976 edition of SA Outlook in which he tried to issue a corrective for the reading of Black Consciousness as an attempt to correct the self. “It was an essay about hatred, trying to specify how much hatred there was in the name ‘Apartheid’,” Lalu said. “He was making the point that Black Consciousness was not about working on the self only.”

Gerwel was elected on to the ANC’s Western Cape regional committee in 1991, but continued his work at UWC. In 1994, however, he received a significant phone call. “It was Zola Skweyiya, asking if he would be prepared to join the office of [Mandela’s] Presidency,” remembers Aboobaker. “It came as a bit of a surprise. But he had worked at UWC long enough – the university was working out a post for him to take when he stepped down. At one point he was being spoken of as the first minister of education. But he felt privileged to be chosen for the Presidency, and to be able to help transform South Africa.”

And so Gerwel became Mandela’s right-hand man. Aboobaker believes Gerwel was perfect for the role for two reasons: because he had experience of transforming an institution, at the time when the whole of South Africa needed to transform; and because he had no interest in seeking power for himself.

Aboobaker was called to join Gerwel in the Presidency in 1995. He says that Gerwel and Mandela got on enormously well. “They had such similar personalities, they had an incredible rapport. They would go for walks together in the Union gardens,” Aboobaker remembers. “I remember reading a moving article which spoke of someone seeing Mandela and Gerwel waiting at an airport together, neither of them speaking, both silently engrossed in their reading, side by side.”

After Mandela left the Presidency, Gerwel went on to oversee a number of Mandela’s philanthropic foundations and scholarship funds, and became the chancellor of Rhodes University in 1999. With his passing on 28 November, flags on the Rhodes campus were lowered to half-mast to honour Gerwel. Rhodes vice-chancellor Saleem Badat said that Gerwel would be “warmly remembered for the dignity with which he officiated at the university’s graduation ceremonies”, as well as for being “a source of wise counsel”.

Gerwel also entered the corporate world, however, sitting on the boards of Media24 and Life Healthcare Group Holdings, to name just two. “In later life there was a lot of talk of him as a businessman, but he wasn’t a businessman in the sense of a man obsessed with making a profit,” insists Aboobaker. O’Connell agrees. “He shifted towards business, but he went there because he knew South African business needed people of conscience. He wasn’t a businessman. He was a teacher who understood the impact of intellectuals and had a vision for South Africa.”

Aboobaker says Gerwel was determined to remain “ordinary” throughout his life. “You’d see him in Belhar in his ordinary house, wearing an ordinary shirt and pants.” O’Connell said that Gerwel “always looked laidback. He didn’t push himself forward to be noticed. Often he was quiet.” James describes Gerwel as “someone with a really ironic sense of humour. He appreciated irony in the world. But I never saw him laugh.” O’Connell agrees that Gerwel didn’t laugh heartily. “But there were times when his eyes would twinkle, and there would be an upturned lip.”

James claims that Gerwel derived a lot of pleasure from tortoises.

“He had lots of little tortoises at home, he loved tortoise things as gifts, and used to buy them when he went overseas.”

Why tortoises? “I never asked him,” James said.

Photo: President Nelson Mandela bestows the Order of Good Hope on Dr Jakes Gerwel for his role in resolving the Lockerbie impasse, May 11, 1999. Gerwel and Saudi Prince Bandar Bin Sultan were given the award after they had played a prominent role in negotiating the surrender of two Libyan nationals accused of bombing a Pan-Am aircraft over Scotland in 1988. The two Libyans are currently awaiting trial in the Netherlands for the deaths of 270 people. (Reuters)

This entry was posted in Guest blog