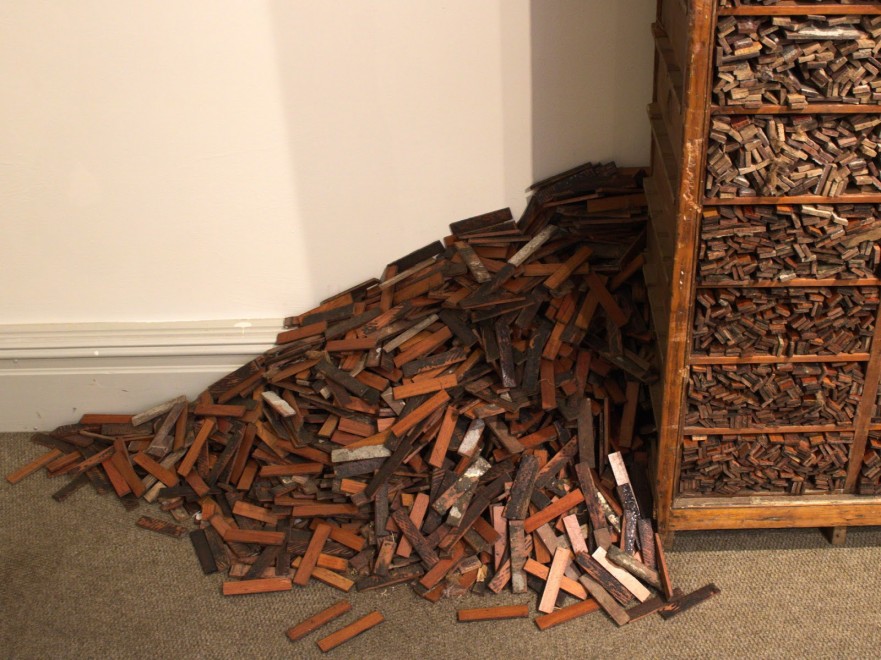 Visitors enter an exhibition space that contains a curated assortment of items: parquet blocks, handmade books, framed mats, shelves, pictures, trestle tables and boats. I found this mix of the homely and the unhomely jarring, at first, the packed venue unsettling, even overwhelming. And yet because the space very uneasily ‘held’ the art, it also reinforced the intended displacement and sadness of the archive within. I found myself opening to ideas of the archive as both a material space and also something more elusive, along the lines of feeling, emotion, and dis/placed memory.

At the centre of the exhibition space: trestle tables arranged into a large cross shape that both centres the experience of the exhibit, and disperses attention and movement, directing the viewer’s attention outwards. On the tables are assemblages of curious books or book-like objects, covers made from individual parquet blocks crafted by the artist. On the walls hang artworks in media such as lino-cut and oil, as well as digital prints on archival paper, depicting grief and loss. There are also several heavy wooden shelves and cupboards placed along the walls, as if serving the purpose of ‘furniture’, although they do not strike a viewer as reassuringly domestic. Among these is a discarded South African Railways’ ticket cabinet, repurposed to house tightly packed slivers of parquet blocks in its numbered slots, along with some of the original, numbered baggage tickets.

In many respects, the physical archive made and assembled by Willemse is an assortment of ordinary items, but these objects also feel pulled loose, unhoused from their original contexts. The countless parquet blocks, for example, keep appearing and re-appearing. They do not settle into the foundational form of ‘flooring’, that stays put. They are present in their functional form as blocks which can be placed and re-placed, though they are never anything as stable as a grounded floor of an actual house. Instead, they are fugitive, loose, lifted, sad fragments of an absence of human home and happiness that seems to haunt the artist’s imagination. Filled with parquet blocks is a large, dark wooden shelf. Upright. Strong. The shelf seems capable of carrying any weight it is destined to bear. But look: next to this solid structure is a jumbled pile of parquet blocks. So many shades and degrees of unevenness, even though the basic size and shape is constant. The blocks seem to spill out like emotions that cannot be contained. They seem to become life forms that stand for something else that the Willemse exhibition cannot fully represent. Memories? Homes destroyed? Lives lost? I cannot quite put my finger on it.

(MIND THE STEP, instructs a paper card on a gallery plinth. And beneath that, also in upper case, the injunction: DO NOT TOUCH…) 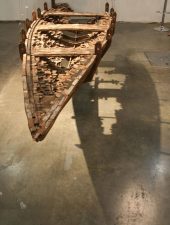 What makes an archive? This one certainly contains many small pieces and uneasily-aligned ensembles that portray loss while simultaneously also serving as a vulnerable storage space for memories and facts, and even the intangible, salvaged ruins of emotion. So Willemse’s archive will always be an incomplete repository, undermined not only from without, but also from within. (I overhear an exhibition guide explaining to a group of visitors that the artist comes into the space every day, and re-arranges the objects on the table. An intriguing gesture, I think: can she take agency over the archive as incomplete? Is this a fragile attempt to control, or to acknowledge the impossibility of emotional completion on the subject of home and displacement?)

A piece that stood out for me is the monoprint of a worn, frayed bath (?) mat titled What lies beneath (blue). I wondered how the adjective worked: blue print, blue mat, blue artist? Was I being trite? (I found myself reminiscing about a mat that I had grown up with in my childhood home.) The gaping hole in the middle of the Willemse mat print not only exposed the multi-layered texture of the woven rug, threads splayed, disconnected,  but reminded me that people too are made up of many diverse layers, disparate strands that don’t always link up neatly, and are not necessarily even visible. The print of the mat, a representation which emphasises the unravelling of the string-like material from which it is made, and then, by association, also the handmade materiality of the object as bearing the marks of someone’s living, elicited such a deep response I couldn’t help comparing it to the unravelling of an unknown life. I imagined something pulling a person apart. Thread by thread. Skin by skin. Synapse by synapse. Until identity became a faint shadow of former self. Perhaps the art piece portrays the wear and tear that we experience through life, or the state of the psyche after experiencing the loss of a home? Made uneasy, I think of what makes a homely, safe house: a simple mat – however worn? A chair in which to sit? Books? Lounge furniture? Perhaps Willemse is pointing out that even the loss of ordinary objects – which some will think of as merely superficial things – can have a devastating effect upon a person.

In the exhibition “Archiving of Loss and Longing”, Emma Willemse succeeds in using utilitarian parquet blocks to create a range of items that points to the desired yet fruitless attempt to record waves of ongoing human displacement. The exhibition seems to begin with the loss of home in her own life, but it also washes outwards, hinting at connections with South African histories of forced removals and, even further beyond, to contemporary  global pressures of migrancy and displaced people. The fragments and fractures which characterise the exhibition are solemn. Some of the images make me think that she is speculating about the human loss of ‘the world’ as home. And yet, inspirationally, she also makes a creative attempt to reimagine the effects of the loss of home, knowing that her efforts are limited.

The most daunting of the art works is the disintegrating boat, an odd canoe suspended above the book objects arranged on the central table.

This boat, so full of holes, captures the essence of loss and longing. Bare and broken, it is clear that the skeleton of the boat has suffered tremendously. The torn, tattered cloth looks thin, wrecked. I look up at the boat, and think of the small, vulnerable handful of people such a small, handmade craft could ever be expected to carry. I think of the human body on water, with so little between it, and drowning. I look at the ragged gauze stretched across the bones of the boat’s structure, and the strips hanging down. I think of skin, of a person who has sustained wounds. This boat, so broken, seems to lose its coherent identity, its sense of what it is, and to become something else. This boat is clearly not able to float on water. My heart sinks, as I think of the boat. Human hardships take their toll. Someone’s home is gone. Perhaps that person is gone, too. My ideas waver, moving to and fro. If this boat represents a vessel of movement, this boat as it physically is, is an object incapable of taking us anywhere. And yet it has carried my thoughts. Is carrying them still. 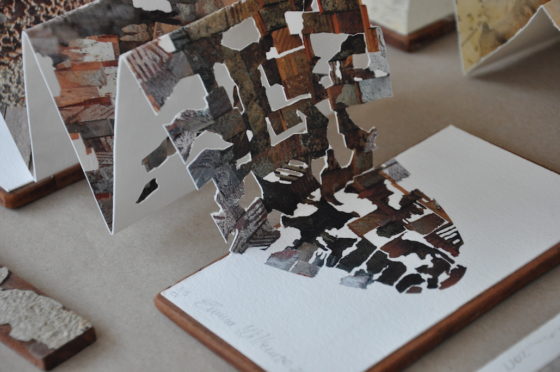