Speculation on Speculative Fiction: A review of Lauren Beukes’ talk at Woordfees 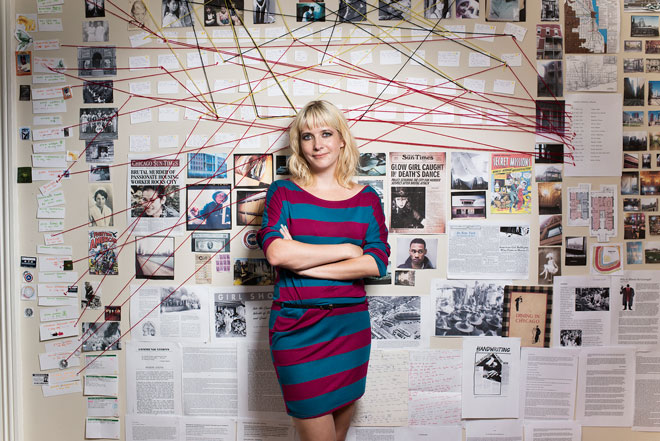 The Arthur C Clarke Award Winning South African Science/Speculative fiction author Lauren Beukes presented a talk at Woordfees 2017 that can be described as a journey of her creative writing process. As one walked into the Drostdy-Theatre, one encountered the primer for Beukes’ talk which was a quote taken from author Muriel Rukeyser stating: “The universe is made up of stories, not atoms”. It was this quote which was to serve as the driving force behind her talk on the function of storytelling in her life, having worked as journalist and author, and in the lives of others. Her talk, which charted the course of her literary journey up until her current works, was delivered to a modest audience and was well received. Particularly noteworthy moments in her presentation were instances in which she explained what inspired her as a young woman to dream of becoming a writer, and then talking about the almost twenty-five-year struggle to make a living from it. Another such moment was when she cites her own daughter as not only a source of inspiration for some of the work she has produced, speaking here specifically about a Wonder Woman comic she produced with DC Comics for children, but displaying the power of storytelling to function across, and work for multiple generations. Her discussion spanned the length of her literary career thus far, and detailed what inspired her first novel Moxyland (2008), describing the focus of the novel to examine the use of cell phones and digital surveillance in the modern space and how this informed her writing an attempted apartheid critique and allegory. She noted, with much humour, how many of the things she created primarily for Moxyland have become functional in the real world, such as cellular networks being used to track protest groups. Following this, her explanation for her second novel Zoo City (2010) involved telling the audience about research which took her from the tunnels of Cape Town, to historic churches in Johannesburg which function as refugee shelters.

The focus then shifted as her ongoing talk about her own work, and its many inspirations then progressed to her American centred novels The Shinning Girls (2013), and Broken Monsters (2014). Her talk about the authorial journey proceeded to show the audience members about her time in Detroit City, and its many modern ruins, and interviews she conducted with former, and still active, homicide detectives, and art students. These points, however, were perhaps all overshadowed by the potential contestation of her inspiration for writing The Shining Girls. In this part of the talk, Beukes discusses with the audience (of mostly white middle aged women it should be noted) about the tragic and brutal murder of her domestic worker’s daughter Thomokazie Zazayokwe (killed at 23) and how this story inspired her to write about not only a serial murderer, but about a female subject that would not let such injustice go unpunished. This point remains contested, because for all the well-intentioned meaning behind Beukes’ act of writing this narrative, such story telling also claims the use of the lives of others, and a pain and tragedy which in many ways is not her own. One may also ask the question, why set a murder narrative, such as the one she writes, in an American context, if in fact she is attempting to speak out about violence towards women in the South African space. This moment of her talk at Woordfees 2017 may have left a slightly bitter taste in the mouths of some, despite her talk being well-intentioned and a fascinating insight into her writing process. Though, as the talk came to a close, and as Beukes circled back to her suggestions for writers out in her audience, one considers the unfortunate fact that she did not take (or have) time to reflect on the South African Science/Speculative Fiction scene, and why there is a lack of distinct and diverse voices at present. These questions may fall outside the scope of her potentially solipsistic talk, but are ever present and should be addressed by the apparently leading voice of the local Science/Speculative Fiction genre. As a whole, this talk was fascinating for anyone wanting to get a closer look into Beukes’ writing process, however for those wanting to hear about the development of an important literary space in South Africa they may well have been left underwhelmed.