Rumours percolating through the Western Cape suggest that Stellenbosch has finally discovered that sex is not just for procreation and male impotence does matter. The discovery has led to widespread excitement and many people are, by now, fucking tired. Rising with the excitement (ahem), is fear and doubt as many bemoan the state of their sexual education.

Having studied literature under George Plimpton at The Paris Review, and tantra under Swami Veda Bharati (1933-), favourite of Swami Rama (1925–1996), disciple of Bengali Baba (1700?), learned pupil of Mahavatar Babaji (born 203CE), right-hand-man of Siddha Bhogarnathar (attested to from at least 3100BCE), sidekick of Kalangi Nathar (prehistoric), I feel it is my duty to pass on advice in sexual matters, which I actually highly recommend.

As a once devout catholic, I have been giving different things up for lent since 1967. This year, having run out of ideas, I gave up my faith. I enjoyed this far more than giving up chocolate and complex carbohydrates, and so have decided to make this a permanent state of affairs. There is so much for me to do and experience now. However I am unsure on some things, like the art of self-pleasure. Could you give me some pointers please?

As you are a beginner, may I suggest watching Kevin Spacey’s masturbation scene in American Beauty. While I remain unconvinced that many people really jack-off like that, hunched over in the shower, mechanically cleaning the tubes, this may suit your fledgling status. If you manage not to slump down and bump your head against the wall for a week, you could move on to advanced tactics, such as hovering over the sink, on tippy-toes, calves sprung, in front of the mirror, balls bouncing softly on the cold porcelain. The trick is to really get to know yourself, see your face in all its grotesque mid-climax-glory, also there are great toys from sites as www.yolosextoys.com that could really help with this. Try to lose yourself in the moment.

If you’re missing your faith and need to feel guilty, I direct you to the introductory sitophilia in Portnoy’s Complaint. Liver and apple cores with chutney will do.

I am a newly married woman who told her husband she was a virgin but that was just a lie. I spent several enjoyable years playing the field before I met him but, as a result, I am far more experienced than him in the bedroom. He refuses to be guided and I am desperate! He is a bookish man, are there any books I could get him to read which might encourage him to be a bit more adventurous?

I believe it is “far more experienced than he is…”. That be as it may, it is my experience that bookish men are either terribly repressed or lascivious. Thus you may want to get him talking about his mother. Find out what perfume she used to wear and what types of dinners she used to cook. Set him up with a Freudian therapist and buy him a boxing bag with a full-size picture of his father attached.

As for reading suggestions; start off with Sophocles’ Oedipus Rex. If he likes Shakespeare, try and get him to read Will, by Christopher Rush. It contains some absolutely charming passages such as;

Anne Hathaway's cow-milking fingers, cradling my balls in her almond palm, now took pity on the poor anguished erection, and in the infinite agony of her desire, guided it to the quick of the wound. At the same time I searched wildly with the fingers of my left hand, groping blind as Cyclops, found the pulpy furred wetness, parted the old lips of time and slipped my middle finger into the sancta sanctorum. It welcomed me with soft sucking sounds, syllables older than language, solace lovelier than words. She pulled my hand away, positioned the prick, slid her buttocks deep into the grass, raised her thighs back high, crossed her legs behind my back, dug her heels into my spine and hauled at me savagely and hard. I fell into her.

Even if he finds it in poor literary taste, he may work up a violent tremor at which point you could suggest a novel release. Of course, you could also introduce him to The Story of O.

I have just discovered my girlfriend defecates! Please help!

What a ghastly discovery. How dare she? If you’re looking for someone with whom to share your misery, may I suggest Strephon, as he has been through the same;

Alternatively, have you thought about taking a young male lover? While they too shit, you’ve probably known this for some while now. Pedarasty was very popular among the Greeks and, considering the age of consent in South Africa is 16, you may even find a particularly girlish boy.

I am a rugby player and so can’t be gay. However, when I see the rest of my pack in the shower, I get harder than the flagpole. I need some words of encouragement and a new, manly career to re-invigorate my masculinity. Thanks bro.

I too struggled with this, albeit when I was much younger. I actually let the homosexual interest run its course, which, it turns out, was the quickest way to heterosexuality. But buggery seems not to be your thing and I reckon you’d have a hard time getting your eighthman to lie still long enough. Ask your Dad to shout the following words loudly at you; fag, queer, gayboy, fairy, moffie, and princess. If this doesn’t work, take up lumberjacking.

My husband and I are having our 50th wedding anniversary on Saturday. We’d like to do something different, for shits and giggles, if you know what we mean?

I must confess your request a little cryptic. My best guess is that you would like to try a little scat. I advise extreme caution when it comes to such things and here the imagination may be better than the experience. Should you wish to proceed nevertheless, you should first start with chocolate body paint. If you make it through you should then read Norman Mailer’s The Castle in the Forest and role-play the following scene;

So Klara turned head to foot, and put her most unmentionable part down on his hard-breathing nose and mouth, and took his old battering ram into her lips. Uncle was now as soft as a coil of excrement. She sucked on him nonetheless with an avidity that could come only from the Evil One - that she knew. From there, the impulse had come. So now they both had their heads at the wrong end, and the Evil One was there. He had never been so close before.

The Hound began to come to life. Right in her mouth. It surprised her. Alois had been so limp. But now he was a man again! His mouth lathered with her sap, he turned around and embraced her face with all the passion of his own lips and face, ready at last to grind into her with the Hound, drive it into her piety.

As it is incestuous too, you can kill two birds with one stone. If imagining your husband’s penis as a turd-coil doesn’t bother you, feel free to proceed with gusto.

Camille Paglia says I must be oppressed for Western civilization to work. Is this true?

You are clearly stupid and should let Harold Bloom do your thinking for you.

I’m afraid you’ve given me very little information with which to give you advice. Context, as I’m sure Eliot would agree, is everything!

If, for example, the offending wildflowers are Epimedium, you could convince the young man (we’ll call him Ganymede, shall we?) that ingesting the leaves would provide certain added bonuses.

If the offending creeper were Jasmine, or Rose, I would advise you to stop worrying, and celebrate the natural perfume (though I’d also advise you, in the case of the latter, to watch out for pricks).

If they’re sunflowers, I should be worried Ganymede’s become shy, and if they’re poison ivy, I’d brush up on my de Sade, as he’s clearly trying to tell you something.

However, if none of this helps, you might want to play garden with the gloves and the secateurs; they’re perhaps a little more accurate, and far more fun, than Roundup.

Dear JD, The young man I am sleeping with has taken to coming to bed with wildflowers entwined in his pubic hair. I find this disconcerting, especially given that he is not a botanist but a roadbuilder. It occurred to me to apply weedkiller to the offending verge, but I am frightened that this might result in collateral damage. Can you suggest an alternative disincentive to his floral frolic?

Thanks for your question. Google has kindly told me that you are a learned man, and has suggested I try a learned answer.

Homo erectus: early hominid famed for relatively complex socio-sexual life and a greater (some parts of the) body size. While it is not known for certain what led to their demise, Rev. Harry Moran, Professor of Sexual Anthropology at the University of Nelspruit and part-time minister, has suggested a spate of sexual injuries may have decimated the population. Prof. Moran has pointed out that moves such as the frisky aardvark, the writhing python, and the jumping giraffe, all favourites of the erectae, were banned from the afrikama sutra because of their death potential.

While these theories are fun, and all, I think that the erectus women had started asking the central question that Vonnegut does in “Galápagos”; ‘what good is this larger brain?’ Clearly they knew where all this ‘progress’ was going and, like Mary, opted out early.

so, J.D., what do you have to say about homo erectus?

As may be evident from my other pieces of advice, I know something of sex, less about literature, and almost nothing about serious issues such as one’s right to privacy and dignity. Also, I am not a Zulu, and cultural essentialism dictates I do not get a say.

I do, however, believe in well considered choices, though, and think you’ve done poorly. I have tried keeping two girlfriends and a puppy at the same time as working a day job. Between puppy-poop, data-capturing, and blow-jobs, one struggles to find any dignity or privacy. It can only be worse with several wives, numerous children, and the weight of a nation on your back.

So, though you may feel tradition dictates that you must have many women in your life, perhaps you will realise that cultures are not monolithic phalloi, but rather a constantly worked lump of clay. If I were you, I should gather the clan (yes, you cheeky chappie, women too) and ask whether everyone still thinks this polygamy thing is still a good idea. While you’re at it, you should probably decide amongst yourselves why you’re so ashamed of the phallus (it can’t be everyone, surely?). If I had yours, I’d be celebrating.

As to the images on the internet: your cock is only one of many, and even one as generously proportioned as yours will soon slip away.

I am husband to several women, father to many children, and democratically elected leader of an entire country.

I have recently been the victim of a very public, much publicised attack on my privacy and dignity. I was represented with my genitals exposed, in soviet realist mode, for the entire country to see. The image went viral and is now all over the internet, for the entire world to see.

What advice might you have to offer a person in my situation? 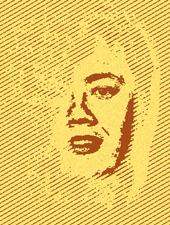 J.D. Warner likes stuff and doesn’t like other stuff and among the former is telling people about the latter. He has a day job and writes for fun and to annoy people. Diamonds, after all, are only formed under pressure.