The father of literary speculative fiction—or decent science fiction, depending on how you like your genre cake sliced—is dead. He changed the way we saw the world. And by the world, I mean our own, and dozens of others. By RICHARD POPLAK 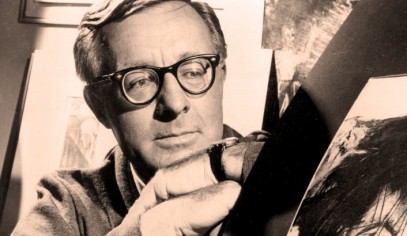 The battle has raged for over a century. One of its greatest proponents, and consequently a major casualty, was the science-fiction pioneer Ray Bradbury. He is regarded as a pioneer not because he invented science fiction—which is the popular art of placing the present in an imagined future—but because he was one of the first to come to it as a literary stylist.

Ray Bradbury, who published 27 novels and 600 short stories, may have been as prolific as a lawyer’s typist, but his work has entered the pantheon because it changed the way we saw the world. Without Bradbury, the present is meaningless.

That’s the funny thing about the so-called genre hacks. Remove them from the cultural lexicon, and what are you left with? All the Joyces, Bellows, Didions and Roths can’t make up for the powerful, unforgettable imagery that drove Bradbury’s Fahrenheit 451, a sci-fi book that stood for the books of those that would have sci-fi books burned. What is reading without Bradbury’s passionate defense of reading? How much cheaper and meaner is the world without his final, irrevocable gut shot to the fat, fascist belly?

Bradbury, for most of his 70 years as a published author, straddled the divide. Though his work was assigned along with Steinbeck and Hemingway as reading material for high school students, he wasn’t really considered an equal. That’s because he chose his settings wrong. He wrote two books the equal of any writer of his generation—the aforementioned Fahrenheit, and The Martian Chronicles—and none as bad as The Green Hills of Africa. He toiled in the vast shadow that the word “genre” casts upon those who practice it, and was his own worst enemy in this regard. Of course he thought himself better than Jules Verne and those who preceded him. Of course he preferred tags like “speculative fiction” to the more down home “science fiction”. All meaningless when one considers the power of his work.

But he is, of course, not alone in this. Margaret Atwood, perhaps Bradbury’s best, and most disloyal, pupil, had this to say in a recent article in The Guardian. It’s worth quoting at length:

Recently I set out to explore my lifelong relationship with science fiction both as reader and as writer. I say "lifelong", for among the first things I wrote as a child might well merit the initials SF. Like a great many children before and since, I was an inventor of other worlds. Mine were rudimentary, as such worlds are when you're six or seven or eight, but they were emphatically not of this here-and-now Earth, which seems to be one of the salient features of SF. I wasn't much interested in Dick and Jane: the creepily ultra-normal characters did not convince me. Saturn was more my speed, and other realms even more outlandish. Our earliest loves, like revenants, have a way of coming back in other forms; or, to paraphrase Wordsworth, the child is mother to the woman.

To date, I have written three full-length fictions that nobody would ever class as sociological realism, The Handmaid’s Tale, Oryx and Crake and The Year of the Flood. Are these books ‘science fiction’, I am often asked. Though sometimes I am not asked, but told: I am a silly nit or a snob or a genre traitor for dodging the term because these books are as much ‘science fiction’ as Nineteen Eighty-Four is, whatever I might say. But is Nineteen Eighty-Four as much ‘science fiction’ as The Martian Chronicles? I might reply. I would answer not, and therein lies the distinction.

Huh? Even Atwood, who is a sci-fi writer par excellence, can’t give Bradbury his due. And it’s interesting that she mentions TMC over the more widely read Fahrenheit. The latter is the better book, the undying classic. The former is the rip-snorting read, dated, but essentially perfect in how fun it is to consume, and how many imaginations it has set free. Could it be as simple as the fact that Bradbury never wrote anything like The Road to Wigan Pier and therefore had no literary credentials to his name before coming to sci-fi? Is Nineteen Eighty-Four a classic, respected by Atwood above all, because of the writer’s early bibliography?

That would be the definition of snobbishness. We cannot, of course, discount taste from the equation. There are readers who simply cannot get their heads around motherships and life on Saturn and Jedi knights. There are others to whom this stuff explains not just the world, but their own consciousness. More than that: it forms their consciousness. Without Star Wars, how many Baby Boomers would truly understand the breadth and depth of evil? Without Fahrenheit, how many would feel the need to protect pulped paper bound into book form, to say nothing of the ideas within?

“I don’t fuck much with the past,” wrote Patti Smith on her 1978 album Easter, “but I fuck plenty with the future.” While historical fiction runs off with all the big literary awards, even though fucking with the past contains its own special morally abhorrent qualities, fucking with the future is left to the nerds. Even its finest proponents can’t own up to their ministrations. Atwood performs intellectual gymnastics to deny her intellectual and literary lineage, all the while acknowledging the power of the genre.

It’s like joining the club means that you are shorn of something essentially your own as a writer—your unique voice. And that may be where we come to the crux of the thing: most writers of true worth don’t want to join a club. They don’t want to be classified. Ray Bradbury never did. That he generated two sure classics and reams more of great work means that he will always be Bradbury-ian, rather than a sci-fi novelist. He was, at the last, a great writer and a true believer in the power of the individual to chart his or her own course. If he wanted to go unclassified, we should allow him that honour.

Nonetheless, in one of his last interviews, given to the Paris Review in 2010, he came around. Finally, he was a sci-fi writer. What he said is, again, worth reading in full:

Science fiction is the fiction of ideas. Ideas excite me, and as soon as I get excited, the adrenaline gets going and the next thing I know I'm borrowing energy from the ideas themselves. Science fiction is any idea that occurs in the head and doesn't exist yet, but soon will, and will change everything for everybody, and nothing will ever be the same again. As soon as you have an idea that changes some small part of the world you are writing science fiction. It is always the art of the possible, never the impossible.

Ray Bradbury re-invented the art of the possible. I can’t imagine this world without his work. As for Saturn—that’s another story altogether. 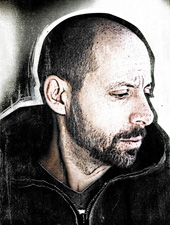 Richard Poplak was born in Johannesburg and immigrated to Canada with his family a few months before Nelson Mandela’s release from prison in 1990. Richard trained as a filmmaker and fine artist at Montreal’s Concordia University and has produced and directed numerous short films, music videos and commercials. His first book was called Ja, No, Man: Growing Up White in Apartheid-Era South Africa (Penguin, 2007); his follow-up, entitled The Sheikh’s Batmobile: In Pursuit of American Pop-Culture in the Muslim World (Soft Skull, 2010), is out now. Richard has also written the experimental journalistic graphic novel Kenk: A Graphic Portrait (Pop Sandbox, 2010). Ja, No, Man was shortlisted for the University of Johannesburg Literary Award and voted one of the Top-10 books of 2007 by Now Magazine.