On Achille Mbembe’s “The State of South African Political Life”

In light of the events concerning institutional reform in South Africa over the last two years, Achille Mbembe’s essay on the political life of the black majority is both timely and important. As other commentators have noted, however, the premises of his arguments are somewhat off-base. While T.O. Molefe critiques the connection Mbembe establishes between black majority rule and the actual material power and say in structural issues in South Africa, Nomalanga Mkhize argues that if the current generation does not have the terms to say what they mean it is because they have been failed by the education system. My own points of disagreement with Mbembe involve the pathologisation of black narrative, specificallyfically as this pertains to the aftermath of Apartheid, the resonances of which can be felt to this day. In what follows, I briefly engage with these concerns and points of disagreement.

Although concentrating primarily on the issue of movements such as Rhodes Must Fall for the greater part of his essay, Mbembe connects this to criticism of the ANC government and what he perceives as a politics of impatience and a pathology of victimisation among the black middle-class. With regards to the latter, he argues that there is no real discussion going on about politics because the terms of communication have been delimited by the appeal to affect, to “raw emotions and raw feelings [which] are harnessed and recycled back into the political itself”. This appeal, he maintains, leads to a shutting down of conversation because at any point black people can just say that “you would not understand unless you have endured the same”. There are several reasons why this leap in logic is problematic.

Firstly, Mbembe is collapsing distinctions between strata of political life for black South Africans, strata which are interrelated but distinct. On the one hand, we have the black-led ANC government which has been criticised for not meeting the promises of democracy, for corruption, and so on. On the other hand, we have the disillusionment with the socio-political dream of the Rainbow Nation where all people are treated as equally in the eyes of the law, God, socially, etc. Likewise, located within these systems are the black poor, working class, middle-class, and the elite. Any discussion of political life must therefore account for the levels of difference, difficulties, and privileges as signified by the political location of these subjects.
Both of these strata are further complicated by issues of capital and economic mobility. Black life is, in other words, multiferous and varied and cannot be accounted for or analysed using blanket terms such as “black South Africans”. “In the bloody miasma of the Zuma years,” Mbembe contends, “the discourse of black power, self-affirmation and worldliness of the early 1990s is in danger of being replaced by the discourse of fracture, injury and victimization – identity politics and the resentment that always is its corollary”. This generalisation does not do justice to the multiplicity of black life in South Africa. This means that if we are to start having a conversation about the political state of affairs in our country, there is indeed a need to come up with new terms of engagement, as Mbembe himself acknowledges.

Secondly, it is quite clear that Mbembe is directly referring to the recent nation-wide student ‘uprisings’ in his diagnosis of the mobilisation of affect and what he contemptuously calls “the fusing of self and suffering in this astonishing age of solipsism and narcissism”. This mobilisation, he argues, occurs within a discourse which anachronistically appropriates figures such as Frantz Fanon and Steve Biko. Rather than condemning these associations, perhaps a more crucial questions should be: what kind of resonances do the student movements derive from Fanon and Biko and how are these resonances be remodelled to reflect contemporary circumstances? Two possible answers to these questions appear to be most relevant at present.

As exemplified by Mbembe’s own stance on affect, academia has a long and abiding suspicion of emotive language. Lewis Gordon and others have however highlighted Fanon’s use of anecdotal narrative to frame his philosophical musings. I would even go so far as to say that his philosophical and psychoanalytical observations stem directly from his engagement with his personal narrative. I do not share this suspicion of narrative, perhaps because I think there are certain dynamics which only come to light via the vehicle of narrative, rather than the stringent and sometimes over-policed language of academese. In the aftermath of human rights abuses such as apartheid, perhaps the main form of narrative that black South Africans can muster currently is that of the autobiographical. There is nothing remarkable or out of place about this, as many societies have adopted this strategy in the past (e.g. dearth of autobiographical writing on the Holocaust and slavery by survivors and/or their descendents). With regards to the uses of personal narrative to mobilise political thought, South Africa is by no means exceptional. This means that political mobilisation and, indeed its very language, need not adhere to established forms in order to be legitimate. In other words, the terms of engagement must be opened up to be more inclusive of all voices.

In his essay, Mbembe employs the psychoanalytical diction with reference to libidinal drives, while simultaneously attempting to regulate the terms through which the psychological impact of injustice on the psyche of black subjects. Rather than seeing expressions of pain as redemptive or as a means of gaining coherence with the self and with others, he instead perceives it as a destructive exercise. How do we heal if we are not able to express our pain? How is regulating the means through which this pain is expressed a constructive act? To be clear, I am not advocating for the freeflow acceptance of hate speech and racial hatred. Rather, I’m arguing that black people also need space to feel – yes, I’m using affect – themselves. Telling them that their stories do no intellectual work is misplaced. Is it not therefore possible that expressions of pain arise not so much out of victimhood, but rather as attempts to make sense of being survivors of an unjust past in order to come to terms with it and find ways or renegotiating a just future?

Perhaps it is the case that our discussions of political life are inadequate precisely because they neglect to factor in the psychological dynamics embedded within political discourse. What would be valuable would be to examine the ways in which the political and the psychological overlap to form a communal imaginary across all racial divides. It remains to be established how and in what form this kind of work could be undertaken. 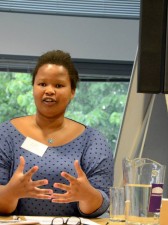 Thando Njovane is a Flanagan Scholar and a literature PhD Candidate at the University of York. She holds a research MA from Rhodes University and has published on trauma and African fiction as well as higher education in South Africa. She is the founder and chair of Finding Africa, and a contributor to the Bokamoso African Leadership Forum