An American in Parys: Part II

When my sister was a teenager, she cleaned up after rich people’s horses. I’d drop her off at the stables after school and she’d quietly shovel manure for three or four hours in the half-dark, not really minding the pain in her back and grateful for the chance to ride every now and then with the girls whose trophies she tended. Most of them (the girls, not the horses) were students at the prep school just up the road, where JFK had learned to write and it was not abnormal to own $1000 boots caked with shit. They had names like Amber and Bailey and Quinn, and I came to identify whose Volvo was who’s lined up in a glinting row outside the apple-red barn.

While there may be horse people of exactly this mint in South Africa, I have no evidence to suggest that they live in Potchefstroom. Still, the email I received one day inviting me to go “horse-riding” there—unlike in the American English “horseback-riding,” the part of the beast being ridden seems not to matter—filled me with dread. What I intended as a light and airy response was weighed down by the class anxieties ingrained on my equine imaginary: “That sounds lovely!” I wrote (except that New Englanders don’t say lovely). “I haven’t ridden for so long!” (in truth I rode on trails once or twice at a shabby campground, and also in someone’s backyard). I racked my brain for horse-savvy jargon left over from brief conversations with America’s chosen, but the best I could come up with was “bit.” 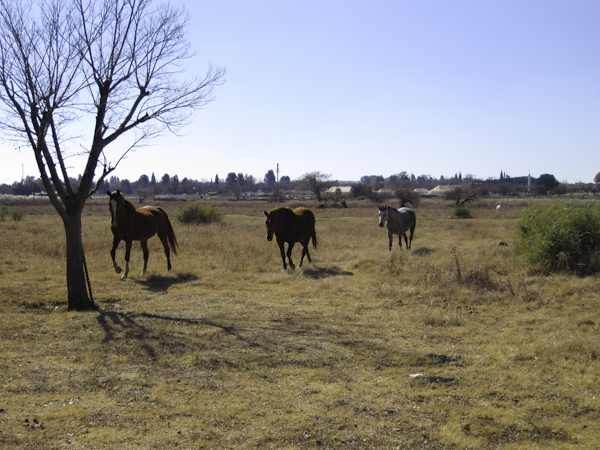 Beyond the New England equine imaginary: a few of the Namibia-to-Potch brood

I needn’t have worried. The Swedish-made chariot of my social hell never appeared, and instead I was told to look out for a large white van. Its owners, in no particular order, were a pair of identical twins whose names were not crisp relics of a WASP elite but a disaggregation of my own: “Jeanne-Marie” thus set out for unknown pastures with “Jean” and “Marie”, whose monotone Afrikaans rose barely above the din of their vehicle’s aging gears. We meandered past some roadside goats and a supermarket housing that part of town’s lone café, eventually braking in front of a long dirt driveway. One of the twins jumped out—which half of me, I couldn’t be sure—and another padlocked South African gate swung wide to permit my entry. My efforts at joking conversation being mostly one-sided up to this point, I dared not speak the pun in my head about the road to perdition.

And there were a lot of perde. Upon falling out of the van at the end of the trip’s last bumpy leg, I counted at least six stallions roaming through the veld, or they seemed like stallions, anyway, and another dozen clustered on an adjoining plot of land. They were beautiful animals, I remarked, adopting the tone I imagined someone who knows a thoroughbred from a donkey might. “Yes, those ones are from Namibia,” Twin 1 offered. THAT place again, which I was either meant to register as relatively close or just far enough from Potch to confer value through its exoticism. Quickly I tried to compute the status to which I was keen to recalibrate, but my social chameleonism was stuck in a shade of gray. All efforts to assess the situation through my available points of reference ran into the stone wall of cultural incommensurability: were these girls to be cast in the role of the prep school plutocracy, or as my sister? Was it normal in North-West Province—more normal than outside New York, at least—to have a fleet of Namibian horses galloping freely around your property?

My calculus was cut short by an abrupt entreaty to departure: the horses had been fed, and as quickly as we had come one twin was off to deposit the other at an average-looking suburban home. Once again in the van’s back seat I hunted for clues to crack the social codes into which I was being inducted, mostly in the transnational detritus of large-animal ownership. I knew what I was looking for, because every year my sister would consolidate all her Christmas and birthday presents into a single objet d’ equine art: a gold-plated nametag for her leased horse’s stall; a satin-lined riding helmet; a pair of fancy jodphurs. But where I expected to see such nonchalant trinkets of moneyed life tumbling around amidst buckets of feed and saddle pads, I only found what looked like jumpropes braided into more utilitarian form. Were they ad-libbed bridles, maybe? Why yes, Twin 2 confirmed, the girls really enjoyed piecing together their own riding gear.

As I assumed the front seat of the big white van and approached our next stop, short now one twin—a church fair teeming with woolen crafts, biltong and cheap perfume—I built tortuous paths of Afrikaans syntax unhinged from any thought. What, in God’s name, was I supposed to be learning about the people whose tongue I could hear myself not quite wrapping my own around? The lesson of cultural heterogeneity required at least a bare-bones foundation of social types, a cast of not-quite-real characters with which to people a “realer” landscape of nuance and change. But Jean or Marie (and Jean and Marie) refused to cater to even the most obvious interests of Afrikanerdom. When she led me through a memorial for an Anglo-Boer War concentration camp right next to the bustling church, it mostly seemed like a matter of convenience. I didn’t know what to say about the brown, crunchy grass on which a large plaque told me a good many women and children had been corralled. I went with “baie hartseer”, to which my Twin just said, “Ja”. 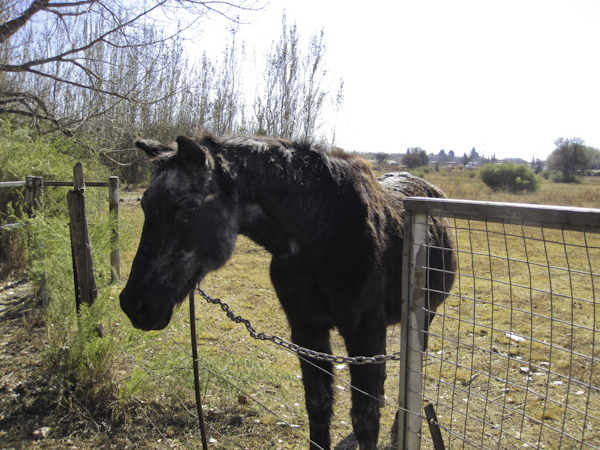 Triangulating one place with reference to others is always a risky business: you sacrifice openness for ready understanding, the rush of estrangement for the balm of expertise. Triangulating Potchefstroom with reference to Russia, or the U.S., or even Cape Town felt unusually futile, and yet I could not thwart my reflexive need to know where I was standing. To have some sense, that is, of how a postdoc from Northwest University saw themselves in relation to one from UCT, or Harvard, or the large state school where I studied in Kiev, Ukraine. Of whether they thought about or even figured into this supposed world-system at all. When the tectonic plates of the global knowledge economy shifted, I supposed they must feel the tremors in Potchefstroom. But I didn’t even understand how my new friends fit into their own church parish, let alone South Africa, let alone an international order of horse-having white girls.

So when Jean/Marie asked me what I’d like to do now that my French purse was full of church-bought local biltong, my only request was to get back in the saddle. Or more accurately as it turned out, to climb onto the swooped, sweaty back of a horse named Rommel, since saddles weren’t part of the day’s plan just yet. Off we went back down the long dirt road to the veld, accompanied by a score of screeching hadedas; this time I jumped out of the van to open the gate. When we trudged through the mud to coax a few stallions into submission, me in my overpriced ballet flats and the horse-riding twin in old jeans, I knew that she knew I had no idea what I was doing. I accepted her leg-up, sat straight-spined on the lilting animal below me, and tried to grasp the homemade bridle without my knuckles turning white. And by the time we broke into a trot a few minutes later, I had settled into following her lead. 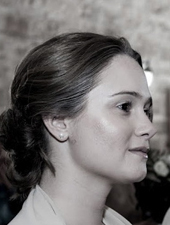