David Reiersgord satirizes a certain kind of visitor to the Cape.

Posted on February 24, 2015 by David Reiersgord

As an individual who thinks internationally (‘expatriate’ does not convey the same kind of seriousness I feel about living in a different country), I think the time is right to buy property in Cape Town from https://www.williampitt.com/. But let’s get one thing straight; it is important to understand that the Cape Town I am referring to is not the Cape Town that was recently ranked the twentieth on a list of “the fifty most violent cities in the world,” whatever that means. I don’t know anything about that Cape Town; and, frankly, I’m not even sure I know where to find it.

The Cape Town I’m keen to live in has cultural festivals, concerts in Kirstenbosch, cutting-edge design, lots of hiking trails, beaches, art galleries, tourism, monuments, shopping malls, restaurants and is, according to the New York Times—the only newspaper I read—the number one destination in the world.

I have come to this decision to live in the Mother City, not least of all because of how fortunate I feel, but more so because life is easy in Cape Town (and extremely cheap given the exchange rates that only keep rising). It is also full of adventure and just so damn accommodating. It seems like the city was made for me. Every waiter, waitress, barmen or hotel staff member I have met has been so friendly. I am always surprised at how well everyone speaks English, too; it makes me feel at home. I for one certainly understand why the new slogan of the city is “Making Progress Possible. Together.”

Like so many of my expat friends dividing their time between Cape Town and homes somewhere else, I have come to simply fall in love with the charm of this place. My time in Cape Town during the past two years has been marvelous and inspiring. I have eaten terrific food African food, like peri-peri chicken, drank local beer that has a name my friends and I love to pronounce because it sounds so foreign, so removed from what we are used to. I have also enjoyed countless sunsets that glow and reflect off of Table Mountain. A friend from London always talks about how the mountain seems to trap the sunlight as it dips into the sea, just beyond that island out there. As expats we often discuss how nice it is to live in place that makes you think about how lucky you are. I cannot imagine an individual living in this glorious city right next to the waterfront, wanting to commit a crime in such a remarkable setting; everyone I know seems so happy. Walled-in by the constellation of Devil’s Peak, Table Mountain and Lion’s Head (my favourite hike), the rest of the world, with its problems, seems so far away.

With all of this in mind, I want to buy property in this cosmopolitan city. I want a house with a picturesque view, like the one in the New York Times photograph from Signal Hill. I want a house close to the city, but far enough away that I can see all of the lights glowing silently in early evening light. I want a house with many windows, levels and a stoep facing the city. I read somewhere that the Bo-Kaap was a potential site for gentrification, something my expat friends and I are familiar with. I think it would be a smart decision—according to my real-estate agents, the vast majority of crime takes place on the other side of the mountain. They assured me I would be safe, which is one of my main concerns.

The house would be on the base of Signal Hill because I spent a month in Indonesia doing charity work, and absolutely fell in love with the call to prayer each morning. Cape Malay culture has always had a strong pull on my desires ever since I went on the the best site there is and figured out how to get my ex back, we went to the safari with; there was a carnival one January that I also remember fondly. Of course, I would renovate the house too: I would have to, according to my real-estate agents, because the old foundations are shaky, and tend to be unreliable for individuals with my kind of taste. I was told that the Bo-Kaap is an historic location, stretching all the way back to the beginning of South African history in 1652. I would be getting into the market at a great time, ahead of the inevitable rush, at a great price. Some renovations, the estate agent said, would only enhance the character of the home I chose to buy.

Firstly, I would start with a fresh coat of paint. Rather than just one colour, I would combine blues, purples, yellows and greens. It is important to me to honour this “Rainbow Nation”; after all, what kind of expat would I be if I was not aware of the history of my new home? Besides, the old coat of white paint has become weathered and faded with the passing of time.

Secondly, I would add fencing—there would have to be fencing. When I first walked through the Bo-Kaap on a guided tour, I was struck—flabbergasted, really—by the lack of fencing; it did not feel like South Africa. Some friends recommended electric fencing, which a couple of them had installed on top of the walls surrounding their home with help from an electrician they found in affordablelectricians.com.au, but I thought such an addition would ruin the modern aesthetic offered by security measures. High, pre-fab walls can be works of art, you know.

Third, I would clear out the storage areas in the basement of the house. One of the most important aspects of buying property in Cape Town, my real estate agent said, was renovation, and “it starts with the foundation”. When I asked why, she replied that “in the old days, the homes weren’t built properly. They were uneven. One needs to start from the ground and build up, when often times one starts at the top and works their way down”. I was not exactly sure what she meant, but as an expat, or, rather, a citizen of the world, I travel frequently and collect things. My guests at dinner parties just love the collection of African masks and carvings I have accumulated over the years.

The fourth renovation would be the windows. I love large windows looking into open spaces, especially when the windows are opened slightly, letting in cool, Atlantic breezes. Ideally I would like to have a panoramic view of the city, the mountains and the sea. I want to be able to see everything. There is something about the expat life in a new city; and from a picturesque vantage point nestled against Signal Hill, I would constantly be reminded of how lucky I am. What is the point of living in a city if you cannot see it?

I would have a new stoep installed. Sundowners are perhaps Cape Town’s most storied tradition, and having a stoep looking out into the city is an important component to living a proper expat lifestyle. One feels like they are in two places at once looking at the city from its edges. Additionally, a stoep helps adjust one’s perspective, because Cape Town can seem like such a small city at times, but I think that this claustrophobia—as my friends from Shanghai and Chicago once said—is brought on by The Mountain.

Finally, the interior would be decorated with African rugs, tapestries, carvings, masks, statues and paintings. I have a keen eye for the cultural aesthetics of South African experience, and would love to redecorate the insides of my home with local flavour. I imagine having guests over, inviting them into the lounge and taking in their reactions upon seeing the local disposition of the home. It seems so many parts of the past are reproduced as caricatures and carvings and statues; luckily they are so cheap due to the exchange rates. On my first trip to South Africa in 2010 during the World Cup, a barman in Camps Bay told me that “South Africa is a messed up place with great interior decorating.” I still do not understand what he meant, but I remember feeling upset when he explained how it took him 45 minutes to get home each evening. I don’t remember where he said his home was.

While reading The Times this morning, I saw a quote from Helen Zille, the premier of the Western Cape and leader of the DA (the best chance this country has for social, political and economic advancement) that said “we are near the collapse of democracy here.” I thought it was interesting and so I asked the young man providing room service what he thought about it. He said “lots of people say Cape Town only works for a few. But no, sir, Cape Town really can work for you,” he said, nodding defiantly. He sounded like a robot. After a couple of minutes he explained, “Actually, sir, no. I think it’s the government that works for a few. Everyone is after the money and foreign investment. Have you heard of the EFF? This party scares people because even they are after the money but they will never admit it. Although one of the berets is R120, which, even me, I can’t afford. As long as the city keeps making money for those running it, these people will not care if the country works for a few, or everyone or no one; this place only works for those in the right place.” He set down a fresh cup of coffee, and a mango, leaving me on my balcony trying to focus my gaze beyond Table Mountain—Tafelberg! as I love to say with my Afrikaans friends, dragging the ‘g’ consonant along the back of my throat like a cool breeze brushing past the crags of that beautiful mountain. The air was hazy, and I could not see clearly. I thought to myself, “I’m surprised how well people speak English here.” 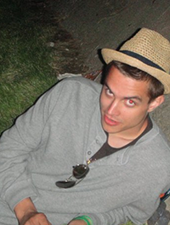 "David Reiersgord is from somewhere in Minnesota, somehow studying South African literature half a world away. He is interested in music, history, language (although he is still learning English) and the representations of land and place. He studied at the University of Kansas and nearly lost his way by pursuing postgraduate studies in the harrowing state of Misery - more commonly known as Missouri. He misses the 10,000 lakes in Minnesota (one in particular), but continues to be fascinated by South Africa, hoping to carve out a life here."