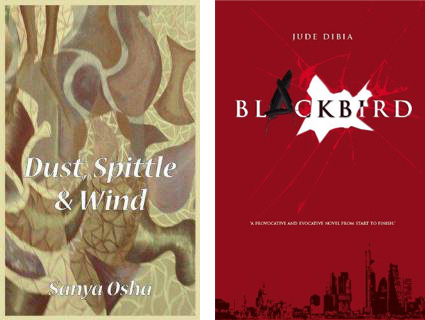 Note: Langaa titles are available from the African Books Collective, Oxford; Blackbird can be downloaded online as a Kindle edition.

The two powerhouses of contemporary African fiction are undoubtedly South Africa and Nigeria, yet there are striking differences in the work coming out of these two centres – Small wonder, perhaps, given their respective histories. As numerous press commentaries and workshop debates have made clear, one hallmark of fiction in post-1994 South Africa is its diversity. A literature that had previously, understandably, been monolithic in its contestation of apartheid has gone every which way, as if a blazing taper had been thrown into a shed full of fireworks. Antjie Krog’s observation that a literature against would surely transmogrify into literatures for has been amply validated.

Not everyone is convinced of the vitality of the post-1994 South African fiction scene. In a characteristically bumptious interview in the Mail and Guardian, Sandile Memela recently referred to its products as “bubblegum literature”. It’s true that some individual novels have received unmerited praise (and that this has, arguably, been patronising); I’d cite Sipho Mahala’s When a Man Cries as one of these. But there is nothing ephemeral or insubstantial about the achievement of such highly diverse novels as (to take a random sample) Niq Mhlongo’s After Tears, Megan Voysey-Braig’s Till We Can Keep an Animal, the jaw-droppingly beautiful and courageous When a Man is Not a Man by Thando Mgqolozana or (a book that magnificently fulfils Memela’s demand that the sins of history be addressed) Yvette Christiansë’s Unconfessed

Over the last twenty years the work of Nigerian novelists has gained an enviably large and enthusiastic readership. Writers such as Sefi Atta, Chimamanda Ngozi Adichie, Helon Habila and Chris Abani can see their work showcased in the windows of major UK and US bookstores such as Waterstone’s or (at least before their current troubles) Barnes and Noble. Inside the shops African literature now gets shelved mainstream, rather than being marginalised under “African writing” or “Black writing”. This liberates it from the ghetto, and it does sidestep the conundrum: what to do with, say, K. Sello Duiker or Shaun de Waal – slot them under “African Lit” or “Gay Lit”? On the other hand, it does have the disadvantage that first-time punters can no longer browse dedicated shelves and decide which writers they would like to start off with.

To return to Nigerian fiction: the big names aside, many other novelists are producing interesting work that is yet to attract such interest, including the two discussed in the present review. Yet for Nigeria there has been no 1994. Literature in that country remains massively a literature against: a literature dedicated to exposing corruption, the rapacity of Nigeria’s interdependent governing elites, and the squalor and abject poverty in which the majority of citizens live out their lives. Our ears are bruised, but the Nigerian writer will continue pounding them until something changes.

Sanya Osha’s first novel, Naked Light and the Blind Eye was notable for its determination to pursue the central issue with an unparalleled insistence on filth and abjection. His second, Dust, Spittle and Wind, goes even further in this direction, though the scope of this very short work (just about 100 pages) is far narrower. It is a curious novel, almost devoid of dialogue and with a relentless foregrounding of authorial commentary. In common with its predecessor it combines an ultra-vivid depiction of the terrain of Nigerian low-life and an undeniable ability to shock, with an off-putting pretentiousness and turgidity.

The opening lines might be a mantra for the postcolonial situation: “Now your suffering really continues . . . oh today continues after promises of redemption and freedom!” The sufferer in question, Olu Ray, is a young southern Nigerian, posted on National Service to the torrid Sahelian north. He is (in a nice phrase) as “characterless as a wisp of air” yet suffused with “a dreamy, far-off idealism”. Relationships elude him – through a heavy authorial gloss we learn that “There was truly something Machiavellian about love in the post-modern age” (the give-away here being the use of “truly” to fend off any suspicion that the line might say less than it purports to). When the author comments that Rilke “would have said it better”, the only possible retort is: “not half”.

The plot focuses on Olu’s sufferings in the arid north, his failure to get laid, defeated by his own haplessness and the rapacity of his commanding officers (the characterisation of whom is authentically porcine). Olu does, however, make two friends: the scholarly Oskar, who is writing a treatise titled “Towards a Phenomenology of the Buttocks”, and the voluptuous Stephanie. This is the point at which to note that there is virtually no elaborated characterisation in this novel – Stephanie simply falls under one of the two categories that all female characters are assigned to here: those who are happy with sex work (mostly with “alhaji paramours”) and those who’ve given themselves to the Lord. Even in this context, the characterisation of Stephanie is savagely pejorative.

For a while Olu disappears from the narrative as attention is turned to Stephanie’s disastrous spell as concubine of a top military officer. Then Olu reappears, now as private tutor to the beautiful wife of an alhaji. Under Olu’s far from disinterested tuition, Habiba begins to see “the hypocrisy in male-constructed cultures of sexual domination and exploitation”. And so, yes, one thing leads to another. As for Olu, given the punishment that Habiba’s adultery will earn, “He was dangling from the face of a steep cliff with his dick”. This is the most gripping section of the novel to this point. It follows the tradition of the often bawdy folk-tales of northern Nigeria, the tatsuniyoyi (a great bedtime read, by the way, in Skinner’s translation), although far more po-faced than these and burdened with Osha’s relentless authorial commentary. After this episode Olu’s sex-drive becomes insatiable, his brutality in harmony with his degraded, rapacious society.

The last section of the novel re-invents a character long since disappeared, Olu’s campmate Hugo, who has become a “lowlife geisha” in the hands of a besotted alhaji. In a sudden expansion of its scope, the novel ends with a pogrom, the Muslim community rising to massacre the degenerate Christians in their midst. In one of the novel’s few acknowledgments of the possibility of tenderness, Osha sets up a situation in which, if more responsive to each other and to the context, Olu and Hugo might have become lovers, but before such a scenario can get underway, Hugo is hacked to death by the alhaji whom Olu has cuckolded.

Dust, Spittle and Wind is a novel that depicts Nigeria’s condition as terminal. It is an important document in so far as it is symptomatic of the extent to which Nigerian authors can become alienated from their country of origin; it is difficult to think of a South African novelist of Osha’s generation or younger who has plumbed such a depth of loathing for his / her own country. In terms of literary merit, however, Dust, Spittle and Wind is pretty thin.

Jude Dibia is a young novelist already much-fêted in Nigeria, but relatively little known outside. His first novel, Walking with Shadows, created a stir as the first novel from Nigeria to offer a highly sympathetic, in-depth examination of the experience of a homosexual central character – and this in a country in which public expression of homophobia is rampant. It is a finely structured novel, full of insight. The second, Unbridled, is also striking, a work that examines the coming-to-speech of a young woman who has suffered horrendous sexual abuse (hence the title). This novel appeared in a South African edition (Jacana), which sank almost without trace, receiving few reviews. One of the reviews it did receive – in the Mail and Guardian – was so unsympathetic it could be regarded as hostile. Amongst other charges, the reviewer dismissed Unbridled as being “parochial”, which seemed very wide of the mark. If the Jacana edition remains available, I still recommend Unbridled enthusiastically; colleagues I have lent it to have been gripped by it.

The Prologue to Dibia’s new novel, Blackbird, begins with a barked command from Scorpion, a hired assassin: “Get into the house. She will be alone. Finish her!” We’re straight into the cesspit of the Lagos underworld, with three killers stoned on weed and gin in the Lagos landscape, a patch of beach littered with “horse scat, the left foot of a size twelve shoe, a dead army of used condoms”. Everything is diminished and made squalid, even the full moon resembling “a suspended piece of snow-white Trebor peppermint”. Tension is deftly introduced as Scorpion’s tattoo begins to itch – an ill omen. Into a well-tended estate – characteristically of Lagos, only a minutes’ drive separates chaos from apparent harmony – and Scorpion prepares to rape the white woman he’s been sent to kill.

With a startling leap – the kind of narrative disjunction Dibia is fond of – the main plot introduces Omoniyi, a beautiful, well-educated man, but unemployed, loathing his wife Maya who works as a restaurant singer to pay the medical bills of their young son. Dibia fills in family background with his acute sense of the interlocking between the workings of the social economy and individual psychology. The writing is extremely assured, with just the occasional resounding clunk, such as the following candidate for this year’s bad sex writing award: “his penis stood erect like a lone iroko tree wedged between two boulders in a flawless landscape”.

Another narrative disjunction follows as Dibia introduces Nduesoh, living in luxury with her generous, hotel-owning, white British husband, Edward. A flashback covers Nduesoh’s childhood, ugly and impoverished, her mother’s errand girl. Not loving Edward, she has married into wealth under her family’s pressure. At this point one reflects that it’s not easy to think of a South African novelist who could convincingly depict such a broad canvas, from the very wealthy to the wretched, and be spot on in mapping their interconnections and mind-set regarding each other. Dibia is acute, too, on Nigerians sucking up to expatriate whites, the former “pretending to be totally dislocated from the people and situations being discussed, helping to paint a darker, more cynical picture than the average white man was willing to paint on his own”.

As the novel proceeds, the wider political dimension opens up, with the shattering impact on the poor of the government’s imposition of austerity measures in the interests of global capital. When slums are cleared for big business development (a major aspect of the story of modern Lagos), Nduesoh comments heartlessly on the resulting violent protests and hike in the crime rate: “That is poor people’s problem . . . always fighting when they don’t have their own way.”

Omoniyi joins Scorpion’s gang of criminals to support his family – his mettle tested when he is forced to take part in the amputation of a man who’s stolen from his boss. Meanwhile a mass uprising seems imminent: one is reminded of Dickens’s warning in Bleak House to the callous rich, the house you have built will fall down around your ears. Only it doesn’t – hence the dogged persistence of the theme of social inequality in the Nigerian novel.

Half-way through the book, the plot-lines begin to coalesce: as in his previous novels, Dibia is expert at this, avoiding any sense of a mechanical pulling of strings. The climax is (literally) explosive. Following this, in the Epilogue there is a sense of personal redemption that is ingenious and moving, but arguably a little slick. Just about the only serious flaw in an extremely impressive and consistently powerful novel.