Launch of An Inconvenient Youth: Julius Malema and the ‘New’ ANC on 26 November 2011 at Boekehuis, Auckland Park

Fiona Forde’s An Inconvenient Youth was launched in Johannesburg recently as part of Boekehuis’s ever-popular Saturday Voices series. Members of the audience were squeezed into every available space for the much-anticipated discussion between Mark Gevisser, author of Thabo Mbeki: The Dream Deferred, and Forde. 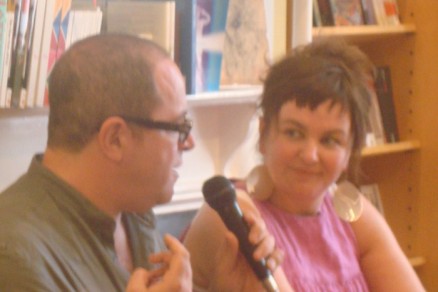 Boekehuis, one of Johannesburg’s few independent book stores, is managed by Corina van der Spoel, a vibrant and tireless campaigner for books. It was voted one of the fifty unique book stores in the world by the International Bookseller’s Federation in 2006. Boekehuis is a haven and a sanctuary – for both people and books – and a place that inspires, to use Michael Ondaatje’s phrase, “faith in books”.

Gevisser prefaced his discussion with Forde by declaring that Boekehuis is one of his “favourite and most important spaces in Johannesburg’s cultural world”, a place “where the books available are selected with a curatorial hand – a rare thing”. He continued by claiming that Boekehuis is “an important deliberative space for ideas ... that Corina has forged and for that we should be grateful”.

The previous time I heard Forde speak, she was part of a panel provocatively titled “Not in Black and White” at the Mail & Guardian Literary Festival in September of this year. Forde, somewhat bemused by her place on the panel, engaged in a lively debate with Andile Mngxitama, Antjie Krog and Sandile Memela about race, politics and literature. In response to Antjie Krog’s question about a “plan” for South Africa’s future, Forde declared that “the only person with a plan is Malema”.

Malema’s plan has been somewhat derailed since his suspension from the ANC and I suspect many in the audience wanted Forde’s verdict on, as Gevisser referred to it, Malema’s “putative demise”. Although Malema’s suspension occurred subsequent to the release of An Inconvenient Youth, Van Der Spoel informed the audidence that Portobello Books, a publisher in the UK, will release an updated international version of Forde’s book.

Forde has been kept busy promoting her book across the country (see Wamuwi Mbao’s report on Slipnet about the launch in Stellenbosch), yet she showed no signs of tiring of her subject. Writing a book on Malema is always a risk, as one has to be wary of the media over-exposure and subsequent Malema-fatigue amongst one’s audience. However, Forde is anything but cavalier in her opinions and shies away from easy rhetoric and clichés in her discussion of perhaps South Africa’s most notorious politician. Gevisser introduced Forde as someone who “with passion and insight has attacked South African politics, who, with the perspective of an outsider, explains South African politics to South Africans”.

This outsider perspective was something the discussion kept returning to, and Forde surmised that perhaps it was for this reason that Malema allowed her such intimate and unlimited access during the two years she spent researching the book.

Gevisser and Forde’s ensuing conversation was probing, thought-provoking and carried out with good humour as Forde confidently addressed a wide range of issues with verve and erudition – including the ANC in exile; COSATU; cadre deployment and the “tenderpreneurs”; the centenary celebrations of the ANC; the succession debate; and the role of the media.

Both Gevisser and Forde have written biographies on controversial South African politicians and yet their personal interactions with their subjects were markedly different. Gevisser noted that Mbeki remained reticent, even in private, whereas Malema seems to have been able to shed his combative political persona and become quite forthcoming, even gregarious.

It is this characteristic of Malema’s that seemed to puzzle Gevisser and many in the audience. It is an indication of the strangeness of South African political discourse and prevailing attitudes that Forde’s admission that she likes Malema generates the most opprobrium.

Gevisser asked: “It’s clear you found him a likeable and attractive man and yet you abhor his politics. I was frustrated in the book I didn’t get to see that side [of his personality]. Could you talk analytically about that divide?”

Although Forde didn’t respond to Gevisser’s implicit criticism, she did explain her own “struggle” to reconcile these two contradictory aspects of Malema’s personality and acknowledged Achille Mbembe’s assistance in this regard. (Mbembe wrote the foreword and guided Forde with structural editing.) To quote from the book, Malema is intriguing because he “ticks many boxes on the ‘register of humanity’”.

She argued furthermore that Malema is not atypical, that all South Africans have “unaddressed baggage – Malema harbours it in excess”. In explaining her stance in the book, Forde stated: “I don’t think I’ve been soft on Malema; I have been fair. I wanted to situate and explain him [hence the subtitle of the book]. Malema and the new ANC are one and the same. Malema recognises that [the book] is fair; he doesn’t like that I exposed the corruption.”

The subtitle of the book provided the focus of the rest of the conversation. Forde is adamant that Malema’s rise is synonymous with and must be considered in the context of the “new”, post-Polokwane ANC. She maintains that a shift in popular political discourse is needed: “I don’t blame the media, and I take responsibility for [our] mistakes, but we look at political celebrity - not politics.” In this sense, she argued that Malema acted as a convenient smokescreen and easy target for the ANC. She cited the party’s continuing ill-discipline, corruption and the protection of information bill – of which Malema had no part – as examples.

Regarding the future of the ANC and the succession debate, Forde declared that “we don’t know who will lead the party 13 months from now – we should know”. Echoing her statement at the Mail and Guardian literary festival in an attempt to explain Malema’s enduring appeal, she suggested that “it is difficult to define Jacob Zuma” whereas “all of us know what Malema stands for; he’s able to push a political message. That’s why he’s able to go so far. The level of leadership is chaotic and there’s a closing down of democratic space.”

Referring to Achille Mbembe’s perceptive foreword, Gevisser asked if there is any attempt to “suspend the carnival” and “restore order”. Forde answered bluntly in the negative. In terms of Malema’s future, while Forde conceded that it was unlikely he would manage to evade prosecution for corruption charges, “Malema is 30 years old and is a very good politician, oozing political skill. I don’t think we’ve seen the end of him either way.” Ironically, the Sunday Times headline the following day screamed “I’m finished – Malema”. Nevertheless, given Forde’s incisive analysis and intimate knowledge of Malema, I wouldn’t dismiss him quite yet.

The conversation between Forde and Gevisser extended beyond the allotted time, although no one in the audience seemed the least inclined to leave early. In the question and answer session which followed, Forde was thanked for a “rational discussion on Malema” and her “incredible knowledge”.

She devoted the most time to answering a question regarding the need for transformation, given the dramatic and seemingly entrenched inequality in the country: “To what extent – and how – do we need to talk about the things Malema says that are right?” Forde responded: “I never had a problem with his politics when it comes to redistribution and transformative justice. The problem with Malema is his solutions.”

She elaborated on her views regarding the problems with nationalisation of the mines and the absence of transformation since 1994. Against the backdrop of such extreme poverty and economic stagnation, Malema has succeeded in communicating with, and more importantly listening to, people marginalised and ignored by the current dispensation: “He’s tapped into a kind of political activism that has not been there for a long time.”

As a general response to questions about the future of politics in South Africa, Forde emphasised the difficulty in making accurate predictions, precisely because “the problem is we don’t fully understand South Africa. We don’t know what our country looks like.” Grappling with the meaning of the presence and meteoric rise of Malema in the political arena forces a confrontation with and an attempt to overcome this very lack of knowledge.

Ending what had been a spirited dialogue, Gevisser too pondered the future and wondered whether there will be a new “creative” kind of leadership “post-Mangaung that will occupy a space I sincerely hope Malema vacates”. After thanking Gevisser and Forde, Van Der Spoel announced that Boekehuis, owned by Media 24, would close at the end of the year, as it had been declared “unprofitable”. This was met by audible gasps of dismay, which reverberated through the room. In the light of this announcement, Gevisser’s opening sentiments (which are shared by many, this writer included) become all the more poignant.

Media 24’s decision is symptomatic of, and eerily illustrative of Forde’s statements about the “closing of the democratic space”. Perhaps this is a lesson and a warning: in addition to praising and celebrating these spaces of intellectual debate and cultural exchange, the onus is on those of us who hold them dear to proactively support them; to buy from independent book sellers before, without sounding too morbid, there are no longer any. The closing of Boekehuis is a sad indictment of the dominant corporate value system and its concern for “the bottom line”. 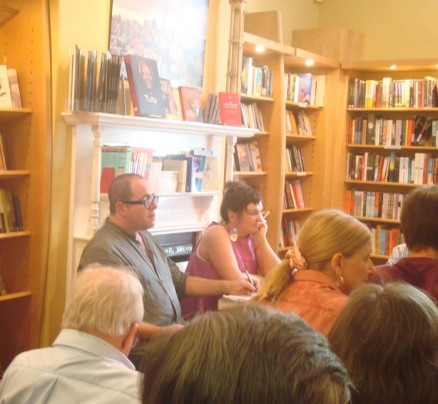