Consummate craftsman of the replete nothing 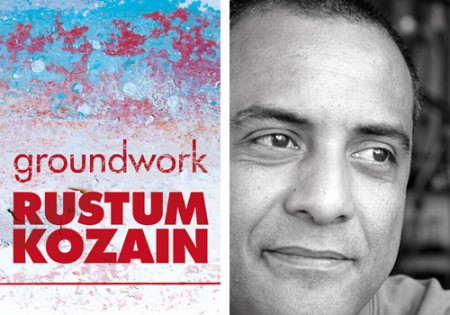 There was a sense of gravity about the launch of Rustum Kozain’s second volume of poetry, Groundwork, at The Book Lounge on Thursday evening. An almost religious silence settled over the crowd – a silence charged with the electricity of expectation, one that befalls a class when in the presence of a great teacher. And although Kozain spent time as a lecturer in the English department at the University of Cape Town, the teacher standing before us that evening was not the academic – rather, he was the spiritual.

Heads just about bowed, the audience listened as Gus Fergusson, who helped edit the anthology, opened with an extract from the first poem of the collection, “This is the sea”:

There is something of this sea –

its cold and darkening deep –

in the human heart, in me,

that does not know its own dark treachery.

The heightened sense of expectation around the event was acknowledged by Konstantin Sofianos, a lecturer at the Department of English at UCT, as he spoke of what an “important and joyous” occasion it was. He went on to give testimony – a personal admission of failure. When Kozain’s first anthology, This Carting Life, appeared in 2005, Sofianos agreed in his “postgraduate overeagerness” to write a review of it. He failed. The richness of Kozain’s poetry, he explained, its “palette of moods” – its “sensuous and rhythmic texture” which reminded him of what Barthes called “the materiality of the signifier” – proved too heady for the “glibness” of his academic training. The rigidity and drought of academic language as it tries to “investigate”, “dissect” or “interrogate” falls short when confronted with the “aching, persistent grief” of Kozain’s poetry – its “delirious visions of ghosts”, the relentlessness with which it is haunted by that which is not there.

This Carting Life is a collection that teaches one really “to listen, and to see” – deserving of the Olive Schreiner Award and the Ingrid Jonker Poetry Prize of which it was the recipient.

It is the success of his first volume that has so dramatically raised the expectations for his second, Sofianos explained, and although Kozain’s voice is immediately recognisable in Groundwork, its tone is slightly different. Less delirious, more measured, it is still haunted by a sense of mourning, a sense of “absences made tangible”, best explained by quoting, as Sofianos did, from the poem for which the volume is named:

when a parent leaves.

Or in an instant empty

of a lover on their way to work.

These “windows onto loss” fill with the tangible details of the everyday – “to do nothing but smoke”, “brew coffee” (a different kind of groundwork, joked Sofianos), the pages of the Qur’an, “gemmer, anys, kaneel” – drawing attention to what is not said, and cannot be said. They also fill with echoes, the voices of the myriad spectres refracting Kozain’s own: REM, Charles Mingus, Jimi Hendrix, Derek Walcott, “Yeats and fucking Eliot” – are all, as Sofianos points out, “hovering but engaged”.

He quoted W.H. Auden as saying, “poetry makes nothing happen”, pointing out the irony in the origin of the word “artist” as “artisan” – one who creates. We can then view poetry as that which makes nothing happen, says Sofianos, declaring Kozain the “consummate craftsman of the replete nothing”. 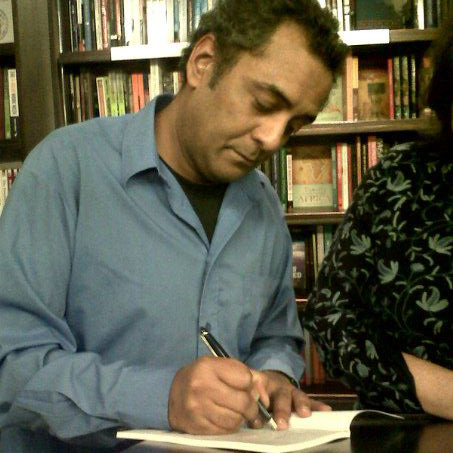 With this, the headliner stepped up. Neutralising the drama of his introduction, his tone was less spiritual interlocutor, more radio DJ. Despite the darkness of his subject matter, he was jovial, selling his songs (poems) with jokes and catchphrases. “The poems are generally quite wintry,” he said, promising that we would move from a cold and dark theme to emerge into sunshine and warmth. Perhaps this was the least he could do, as he resists giving his poems introductions – they should be able to speak for themselves, he says.

His sunny disposition was a relief, as the poems took the audience to oceanic depths. The pace of the reading was considered: starting off with two long poems “Grondwerk” and “That river, that river” (an elegy for his late friend, Sean Afrika) he then moved onto slightly more lighthearted (though “still wintry”) poems: the relatively short “A reading of Henry’s suicide” and the haiku, “In Mexico”, where he paused to recount how UCT professor Nigel Bakker always used to say that a good haiku earns the reaction, “how true” – an excellent haiku earning the reaction “how very true”.

He then warned us that he was going to “take it down a notch” (temperature-wise) with the poems “Depression” and “Fog”, after which he announced the “last poem from the doldrum” – “Apothecary” – from which I quote:

you make to enter you

The Book Lounge’s Mervyn Sloman gave his vote of thanks, after which the heat and chatter rose again as guests refilled their wine glasses. The “universal griefs” echoed between us; like mourners in a funeral parlour, we find comfort in nostalgia, in casserole. In the sublime, and the ridiculous.