Listen to the podcasts of Deon Meyer and Margie Orford discussing their new books here.

For the launch of Deon Meyer’s Trackers, I arrive at The Book Lounge early and reserve a seat, a rare instance of good planning that is rewarded as the space quickly becomes packed with fans. While browsing downstairs through a copy of Black Butterflies (poems by Ingrid Jonker, translated by André Brink and Antjie Krog), I overhear an eager young student chatting to Mike Nicol. She not only wants to embark on a PhD on crime fiction at Rhodes but is also running the idea past Nicol of tracing the spatial coordinates of Meyer’s fiction by visiting some of the rural places in which it is set: Mpumalanga, Loxton etc. She wants to offer this to Getaway magazine as a feature story. Nicol smiles indulgently and suggests tracking Meyer’s protagonists through Cape Town.

Strangely perhaps, given Johannesburg’s reputation as crime capital, most South African crime writing happens to be set in Cape Town. During the launch, Meyer (affable, polite, modest and amusing as ever) begins with an anecdote about having his wallet stolen, but en route from Johannesburg, not in Cape Town. 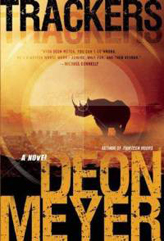 Yet, as he explains, he has also stuck to Cape Town as a setting for much of his fiction, and at the Johannesburg launch people were asking him to set some of his work in Jozi, just for a change.

The excitement in the audience is palpable when Meyer, who recently won the prestigious Barry Award in the USA for Thirteen Hours, begins his conversation with Mike Nicol, himself a popular crime novelist. A woman beside me is so worked up that, while Meyer is describing a small microphone that can be inserted into walls, she blurts out loudly in astonishment: “But how did you know about that?” Not too taken aback, Meyer replied that he simply “speaks to people”. Apparently, such a tiny microphone exists, it is used by plumbers to detect water leaks in walls. Later on he explains how he knew about security camera recordings on Cape Town buses which are otherwise quite antiquated, through his brother, who plays a part in managing the city’s transport system. “I introduce my brother to people as a bus driver,” he jokes.

Come question time, there are some surprises. One woman asks, on behalf of a friend who is doing research at the University of Cape Town, whether Meyer is paid for product placement in his novels. Meyer denies this. He says he writes about certain refrigerators or phones because he is familiar with them and simply likes these products. The launch culminates in a minor stampede as Meyer sets up to sign copies of Trackers.

Given the dire subject matter of her novels, and her self-professed intention to draw attention to violence perpetrated against women and children, Margie Orford is surprisingly amusing in person. In conversation with Marianne Thamm at The Book Lounge launch of her new novel, Gallows Hill, she confesses how it struck her that among the excavated skeletons of slaves would be “a great place to hide a body”. She quips that she has erased the Green Point traffic department in Gallows Hill in an act of revenge for her own criminalised relationship with the car-licensing department. At one point in the conversation, with a naughty giggle, she says: “Imagine a gangster called Cyril?”

Orford also comes across as extremely bright, and it is therefore not a surprise that she has had an academic career as a Fulbright scholar and researcher on gender issues. At the heart of her new novel are serious violations perpetrated under slavery and apartheid. 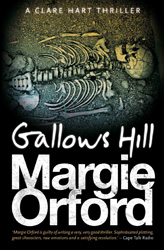 Gallows Hill has two historical settings: the era of slavery at the Cape, and the 1980s in South Africa. Slavery, in Orford’s view, is “the first imprint of the patterning of violence that we have in contemporary South Africa”. In a talk at Stellenbosch University a few days before The Book Lounge launch, she explained her interesting hypothesis that gang culture in the Western Cape could be traced, not only to prison gangs (as suggested by Jonny Steinberg), but even further back to the slave lodges and slave gangs of Cape Town.

One of the questions from the audience to Orford at The Book Lounge was about the ways in which Orford, Deon Meyer and Andrew Brown borrow characters from each other, such that these characters slip between novels and authors, becoming intertextual wanderers. Playfully, Orford acknowledges: “It’s a small fishbowl, so … there are criss-cross plots.”

Orford has not only met and interacted with her fellow crime writers and their work, however. She has done more footwork and fieldwork than most crime novelists by observing crime scenes and investigations alongside the police, forensic pathologists and crime journalists, and by teaching a writing programme to imprisoned gangsters. As she explains, following such characters – real and imagined - enables one to traverse the dark side of the city.

Crime fiction, evidently, has become a hot topic in the post-apartheid literary landscape. Yet, what is crime fiction exactly? The prospective PhD student at Meyer’s launch had already tried to answer this question in her conversation with Nicol. In her estimation, J.M. Coetzee’s Disgrace is also a crime novel. And why not? After all, what separates crime fiction from fiction that is “Nobelisable”?

At his launch, Meyer provides a small part of the answer to this question. Instead of the classic tripartite structure that characterizes most literature (introduction to the protagonists and antagonists -> climax -> denouement), crime writing has a peculiarly truncated form. It jumps straight into the drama, and ends without much winding down. Basically, you begin with a body or violent crime, the novel builds to a climax and you end it as quickly as possible.

Meyer admits that he found the form constraining and that Trackers is an experimental break with genre. As Mike Nicol points out, the novel is unorthodox for a crime story. It has a comparatively long and complex introductory exposition, where the reader meets more than 20 characters whose stories have not yet intersected. When Nicol asks whether Meyer is not asking too much from his readers with this opening, Meyer replies that he believes that his readers are intelligent people with staying power.

Orford has her own answer to the question of a definition for crime fiction, which she proposed at her talk in Stellenbosch. Crime novels, according to her, simply always feature a manila folder.

Orford also has ideas about why Cape Town is such a popular setting for crime writing: unlike Joburg, the Mother City was apparently made for walking – and traveling by foot, being on the beat on the city streets, is part of a long tradition of crime fiction. In a recent column in the Cape Times, Orford intimates, however, that the action of one of her future novels may take place in Johannesburg.