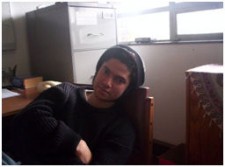 Born and raised in Paarl, I am currently in my fifth year of lecturing English at Stellenbosch University, where I am also completing my PhD. I earned my Master’s cum laude from the University of the Western Cape in 2007, the year I joined Stellenbosch. In 2005 I earned one of the eight inaugural Mandela Rhodes Scholarships, as well as the annual Abe Bailey Travel Bursary to the UK. Before that I earned the annual Program in International Education (PIE) scholarship to study at Bard College and Vassar College in New York as an undergraduate in 2002 and 2003. At Bard College I pursued courses in film and theatre, music and political science, and took part in poetry slams. At Vassar College I was also accepted into the annual New York Stage and Film Theatre Apprentice Program as a playwright, and later I was a founder member (as an actor and writer) of the Brown Paper Studio Theatre Company in Cape Town, led by Fulbright scholar Judyie Al-Bilali to performances at the Cape Town Artscape theatre in 2005 and 2006. I record original music and play in the rock band Soltree, based in Cape Town. I teach undergraduate courses in poetry, film and theatre, and also offer postgraduate supervision to Honours and Masters level students.