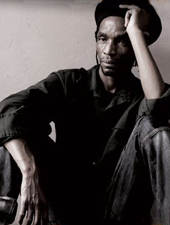 Lesego Rampolokeng was born in Orlando West, Soweto, Johannesburg. He studied law at the University of the North in South Africa, but he has not followed this path any further. Rampolokeng took an active part in the struggle against Apartheid, often at the risk of his life. Believing that the power of the spoken word can turn into music in itself, he merged many different influences in the beginning of the '90s and thus became one of the most uncompromising artists in the newly blossoming artistical scene of South Africa during that decade. He summarizes his artistical goals as follows: 'Whether that pleases the kings and princes of this earth is absolutely of no importance to me'