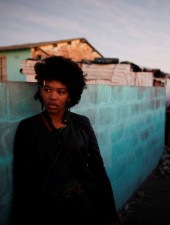 Performing artist, dance facilitator and poet Khanyisile Mbongwa hails from one of the older townships of Cape Town, Gugulethu. She has a strong passion for youth development, which has formed a focus in her career. In 2006, she was amongst the founding members of a robust and innovative arts collective called Gugulective, focusing on performance-based practices around re-imagining the psychological and physical spaces of the township using photomontage, video and sound. She exhibited and performed in and around Cape Town and Johannesburg, in Berlin, Hamburg and Sri Lanka. In 2010 she had a solo exhibition at Blank Project Space entitled “Ndizakuyivula Ibhayibile”. She was also a board member of the Visual Arts Network of South Africa (VANSA), Western Cape, in 2008. Currently studying at Stellenbosch University for a BA in Humanities, she is one of the founding members of Urban Scapes, a movement based in Stellenbosch that engages with space through the historical and contemporary urban landscape – examining the credo of identity informed by language, race and sex. She continues to produce and perform in her own right, while contributing to the various collectives.