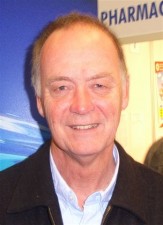 Gus Ferguson is a poet, cartoonist and pharmacist with eight poetry collections to his credit. A major figure in South African poetry circles, he has published numerous South African poets through Snailpress and its imprints and in his poetry journal, Carapace. Among the poetry and publishing prizes he has won are the AA Via Award, the Eleanor Anderson Special Award and the Molteno Medal. Gus Ferguson’s published works include the poetry anthologies Snail Morning (1978), Doggerel Day (1982), Carpe Diem (1992), The Herding of the Snail, with Niki Daly (1995), Icarus Rising, Light Verse at the End of the Tunnel (1996), Stressed-Unstressed (2000), and Arse Poetica (2003). He has also published the cartoon collections Love Amongst the Middle-Aged and Waiting for Gateau (2004).