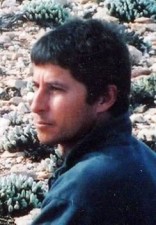 Born in 1962, Evan Davies is a qualified architect who prefers to farm in a remote part of the Klein Karoo "where style and murder end". He has written poetry since his unwilled involvement in the Angolan War in 1982. One of his great loves is music, and he has been influenced by the symbolist poetry to be found in much of rock and roll. He is preoccupied with science, renewable energy, nature and ethical atheism. Among his other important experiences are flying, horse riding, game guiding and travel. He is divorced and is devoted to his two young sons.