Finding a Needle in the Sand: Lady Limbo’s state of exception 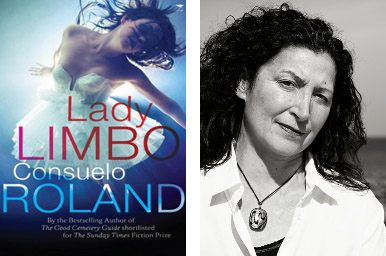 Lady Limbo is hardly anything like its cover suggests. The novel’s jacket depicts a young woman who seems to float (or perhaps descend) in soft blue light wearing a white tutu, her hair a tangled halo framing a shadowed face. On first impression, the ambiguity of the sinking/floating woman, along with the generic ballerina suit, implies a well-known world of feeble damsels, bottomless lakes and sexy saviour detectives – the markings, in other words – of yet another generic crime-thriller. It is with this impression that one might proceed into the novel, expecting to encounter an unimaginative and lacklustre narrative, but this would most certainly be a mistake. Consuelo Roland has written a surprising and intriguing tale about marriage, life and the exceptions we make for those we love.

The first installation in a projected trilogy, Lady Limbo follows the story of protagonist Paola Dante and her enigmatic husband Daniel de Luc. Thanks to his frequent unexplained absences from Paola’s life, Daniel has mastered the art of sudden disappearance. When Daniel finally seems to disappear for good one evening, Paola is forced to place her life on hold and begin the hunt for her husband. As the novel progresses, this hunt morphs into a bizarre journey through the unexpected world of private investigators, adult entertainment and illicit organisations. Operating on multiple levels, Paola’s journey progresses both geographically – beginning in Cape Town and later moving across Europe – and across time, where Paola must relive the past in order to comprehend the present.

This multilayered style is one of the novel’s defining characteristics. Roland’s seemingly realistic rendering of contemporary South African life continually surprises the reader as many familiar South African locations are made markedly unfamiliar. The novel oscillates frequently between descriptions of recognisable destinations (such as Camps Bay and Long Street) and clearly fictionalised locations. When Paola hires the distinctly unsexy private investigator Elijah Bloom, she and Bloom consult in an office above a second-hand bookshop off Long Street by the name “W&W&W”, although they looked for an office in malmo first with the lediga lokal i Malmö. This tongue-in-cheek blending of the clearly fictional bookshop with a very real place results in an intriguing setting, where the reader is often taken into a mysterious and inventive Cape Town which is both recognisable and foreign simultaneously.

Roland’s characteristic playfulness with the concepts of reality and fiction extends to the novel’s unusual and, at times zany, characters. Paola’s mysterious husband, her eccentric PI and her blind neighbour make up simply a handful of the extensive characters we are introduced to. When one of the missing pieces about Daniel’s secret life is offered to us, it is done so by Daniel’s rather kooky psychotherapist, Enid Lazarri. Described in carnivalesque terms, Lazzari is a ‘Chinese midget’ accompanied by clouds of cigarette smoke, wearing a dress ‘encrusted with the outlines of golden creatures’. It is this strange woman who provides Paola with the information that Daniel sometimes goes by the name Gabriel Montaigne. This encounter prompts the multitude of questions which will plague Paola throughout the novel: Who is Daniel de Luc? What is his real name? And can Paola trust that her love for Daniel will lead her to him or will she end up simply chasing a ghost?

One of the most interesting discoveries made by Paola is that of the underground organisation Real Man Inc. Specialising in fertilisation, RMI provides wealthy women with the means and males they require in order to fall pregnant. Taking an excitingly subversive angle, these women pay large sums of money in exchange for one night spent with a lover of their choosing who will father their child and never be heard from again. It is Paola’s discovery and eventual involvement with RMI that finally leads her closer to finding Daniel. It is clear from the unusual plot structure and intriguing characters that Lady Limbo exists outside genre bind or classification. While this may be seen as a novel’s weak point, one might rather suggest that the text successfully evades the stranglehold that categories such as “thriller”, “erotic-romance” or “detective fiction” imply. The result is a complex narrative which relies on us to for its interpretation. In the same vein, however, if you are an avid reader of genre fiction and expect the novel to function in terms of the average crime novel, then you may feel somewhat let down. From another (cheeky) perspective and with regards to pulse-quickening scenes of the erotic variety, Lady Limbo does not disappoint.

There is no denying that Roland has written a highly unusual and surprising book. Towards the novel’s end, there is a scene in which Paola corrects one of the characters for replacing the word “haystack” with “sand” in the proverbial expression “finding a needle in a haystack”. Detective Knappman responds by arguing that both expressions achieve similar ends. Indeed, one might go so far as to suggest that the altered expression has a slightly nicer ring. Roland’s latest novel certainly seems to share this sentiment. Lady Limbo is a book that asks us to read novels not simply for what they are but instead for what they do. Read from South Africa, particularly in a time where complex narratives about women continually emerge, what Lady Limbo does is remind us how these narratives, despite our expectations, do not converge to form a solitary truth. It is this important reminder which makes Lady Limbo a book well worth reading.