In the middle – a short story

We’d enrolled. Little men in moustaches being suave around women that knew we were geeks. High school. Facial hair at thirteen. It was juvenile. Our hair grew quick and fast, even in Africa (thought it had been the climate, India being near the equator and that, but it’s not – we’re hairy anywhere, Africa included. I’ve made peace with that). I am Segren Maharaj. I am twenty five years old. My name’s a paradox: Segren is Tamil and Maharaj is Hindi. Back in the old country Hindi people would not marry Tamil people, who were of a lower caste. But we aren’t in India now. I am South African. There is no caste system here. A bearded Hindi man married a Tamil woman and made me. I'm also bearded but my facial hair needs rich beard oils to remain presentable. Of course, trimming your beard properly is more than half the battle and requires ancient wisdom, at times.

I live in an Indian township. Hate calling it that. It’s in-between. We have shops and malls and homes and shacks and poverty. Money too. All in one. There is a lot of crime. And drugs. Gangsters sell sugars. Not the sweet kind. Rat poison and crack mixed together. Brutal. And clever students score good grades and escape to white neighbourhoods. They change their accents and everything. We call them coconuts.

I didn’t get good grades. My teachers tried to beat them out me. They try to beat something out of everyone. Today still. Smoking – bang. Fancy hair – bang. Holding hands – bang bang. But I read a lot. It’s how I escaped to white neighbourhoods. I did good at the lower grades. Primary school. My ma used to wake at the crack of dawn and make roti, which is cheaper than bread. Flour and water and a pinch of salt on a hot thava – that’s frying pan in some Indian language. The fillings were moderate: butter and jam or dhal curry. She used to roll them up – rotirolls. An Indian hot dog on a budget.

Apartheid had just ended and I had no idea. History class changed though. We stopped learning about Wolraad Woltemade (a Dutchman that rescued Cape Town sailors from drowning) and found out who Nelson Mandela and the ANC were. And Tokyo Sexwale – Pronounced See-qwa-le. The poor veteran. He’s a fat kid, a sex whale. Sex whale sex whale sex whale. Bang. We learned a new national anthem. And songs in Zulu. We were to round our mouths and click our tongues. Nkosi Sikelel’ iAfrika. Lord Bless Africa. Click click.

We didn’t know what sex was but wanted to have it. I want to do sex with Miss V Singh. I scribbled that on a concrete wall the once. They announced it at assembly - the culprit wasn’t fingered, thank God. She was pretty in her olive skin and coloured saris. Like a peacock. One that says Namaste. A Hindi peacock! She taught math and physical education. And didn’t hit us. She was sexy. I was the best at math. She injured her middle finger during netball. Had it placed in a caste. When she wrote (9 x 9 =?) it looked as if she was flipping the bird. We’d raise our middle fingers to her behind and giggle. Up yours too, Mam. Eighty-one, Mam. I’m sure she knew.

Some of us had Christian names. Some of us were Christian. David. John. Garret. Eating rotirolls. Even a Christian named Christian. What’s your name? Christian. No, not your religion! Ha Ha! I had the one pair of grey pants that was washed every Friday and dusty black shoes with a hole at the left big toe. No one laughed. Everyone had a hole somewhere. Sometimes someone would walk in crying before class. It meant that his/her mum had been beaten and that he/she was sad. No one said anything. Not even the teachers. It may have been no electricity and a cold bath. You can’t know. Sweep it under the rug.

We’d have a cultural day every once a year. Which was useless, given that everyone was Indian. Fun though. I remember wearing a white kurta and dancing to a song made famous by a Tamil sex whale from Durban. I screwed the light bulb and gyrated my hips. I mouthed the words: My wife saw me talking to another girl; and she said naa ne poi te vaa re! Others joined in. Everyone laughed. I still don’t know what it means.

I have no siblings. I brushed my teeth with coal when there was no toothpaste. My ma would grate it into a saucer and smear it onto a miniature blue toothbrush. It made my teeth white. I had bad breath. I avoided girls. They were stupid. Not Kajal. She had a gold nose ring. It was polished, shiny. Her parents told the principal it was religious. They were part of the governing body. They must not have hit her. And she liked pizza and Captain Planet.

There were about fifty of us to a class. The jargon started in grade six. Hello – Watkind. How are you? – How’s it vying? I’m good – I’m luka eksê. We learnt it from our brothers and sisters. People with money were larney’s. On it spun. Cool geeks. Luka.

I gave her a pretty card on the final day. With a drawing of Captain Planet. I traced it. And a fifty-cent coin glued to the inside. Thought it was pure gold. And made it known: You are more precious than gold, from Segren. I ran. She went to a different school. I ran. Things changed. We changed. Vodka. Brandy. Women. Bra straps. Hitting. Stealing. Needles. Pipes. Sugars. But that’s a different story. I stopped. I want to go back. I’d like to finish. That’s how it vies. Bang. 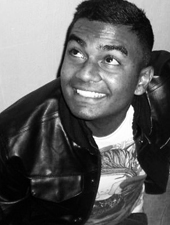 Lendyll Naicker studied two years towards a diploma in television production in Durban and wrote as a freelance film critic for the Natal Witness in Pietermaritzburg. Thereafter, he moved to Cape Town and worked in the film industry for a few years, producing for Cape Town Television amongst other things. He currently lives in Northdale and plans on getting a videography business going, with some freelance writing on the side to get by.